Bradbury started business in 1852, the first company to build sewing machines in Britain and Europe. They entered the exploding bicycle market in 1895 and progressed to motorcycles in 1901. The motorcycles were well made and did well in competition, setting several records for distance events. The company was never considered to be technical leaders, though they had a reputation for quality.

The well-proportioned 1923 750cc twin above had been introduced nine years earlier as a sports model. The engine was an undersquare side valve 50° V twin, transmission was their own 3 speed with a clutch activated with both hand or foot controls.  Picture it in dark green or glossy black with gold striping, apparently the usual colors for the make. This model was in the lineup till the company closed in 1924. 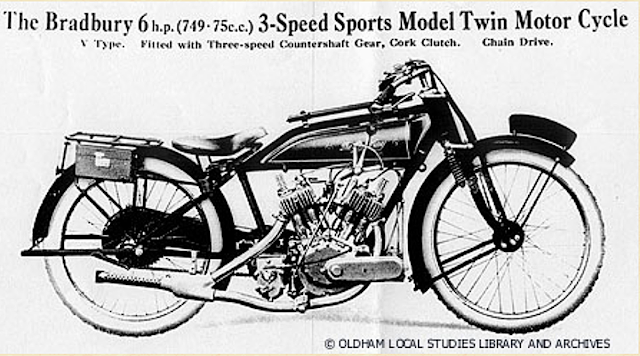 LOL i read that several times before posting but decided that it had no hyphen... :-) I guess I could have used "burgeoning":-)