In my area, I have only ever found three open-ended wrenches ("double ended spanners" in British parlance) made by this company: 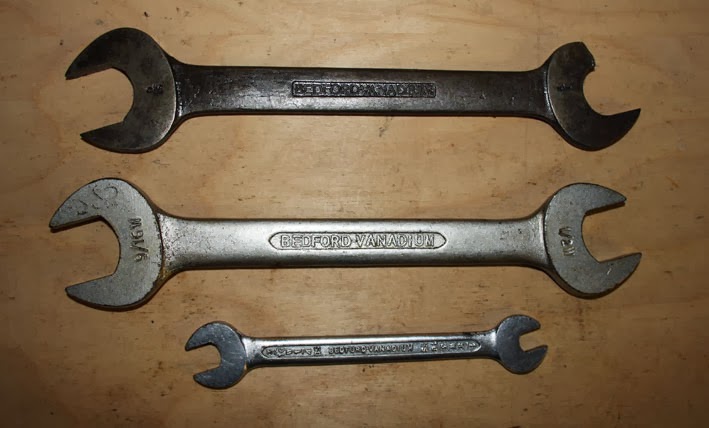 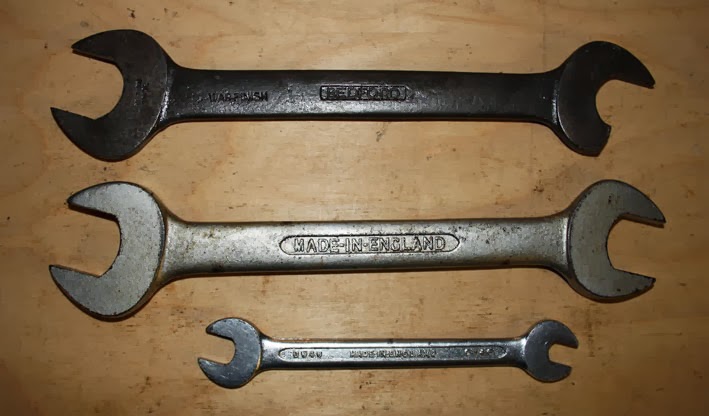 And one SAE (in British designation, "A/F") "ring spanner":

The company that became John Bedford & Sons was founded in Sheffield, England in 1792 and eventually expanded their line of wares to an impressive degree:
In 1942, they celebrated their sequicentennial.  Apparently, their wrenches ("spanners" in England) were highly polished prior to chroming, and were consequently remarkable for their mirror finish.  Their tool offerings were quite wide, as the 1951 ad below demonstrates:

They operated out of the Lion Works in Sheffield.  For a pic of some employees there in the early 1930's, see flickr.

As an aside, I have three "Lion Brand" Whitworth wrenches, and I have to wonder if this may have been a Bedford brand, given the name of their Sheffield works: 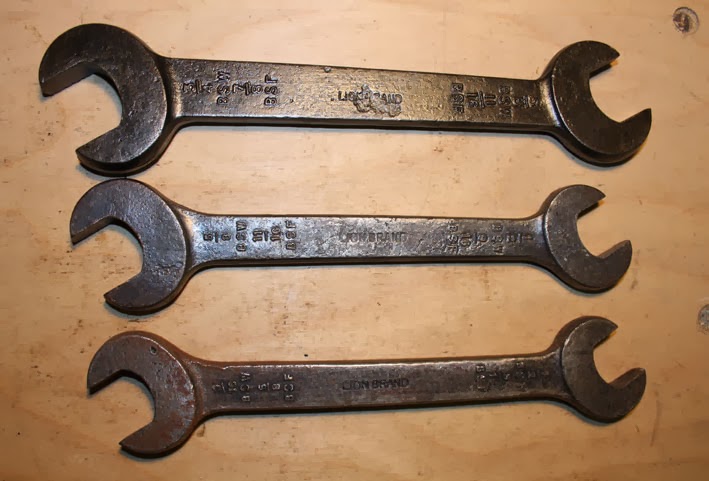 In addition to tools, Bedford & Sons also made steel.  In 1919, they patented a new way to make hollow steel bar using what was called the "copper core process."  Previous to this, such hollow bars could only be made by punching or drilling a billet, filling the hole with sand, and then rolling it into bar.  This resulted in a very irregular hole.  Bedford came up with the idea of using a copper core which was drawn from the bar when rolling was complete, leaving a very smooth, regular hole, much better for rock drilling.  This technology made them attractive to the Sheffield firm of Padley & Venables, who made rock drilling equipment.  (Padley & Venables had started in 1911 as the R. Padley Company, making hand tools.)  In the 1960's, they were acquired by Tarmac, who then acquired Bedford & Sons.

(Tarmac's origins are interesting.  In 1901, Edgar Purnell Hooley, the county surveyor of Nottingham, noticed that a barrel of tar had fallen off of a dray and burst open on the road near the Denby ironworks in Derbyshire.  To make it less of a mess, someone from the ironworks had covered the sticky mess with waste slag from the furnaces.  Hooley noticed that this patch of road had stood up well to traffic over it.  Over the next year, he patented his own process for mixing slag with tar, naming the new substance "Tarmac."  In 1903 he founded the TarMacadam Syndicate Ltd, which ultimately became Tarmac.  During World War II, they helped build the Mulberry Harbours.)

In 1972, Padley and Venables were sold by Tarmac to the American Gardner Denver Group, which spun off the Bedford hand tool division to Spear & Jackson.  This latter company was then acquired in 1985 by the James Neill Group in a takeover, and ultimately renamed Spear & Jackson Ltd. ten years later.  In 1997, it was sold to U.S. Industries, Inc. who sold it once again to Florida-based MegaPro Tools in 2002.  What followed was a complete morass of corruption and scheming.  For more on this dismal period of the company's history, see Answers.com.  Since 2006 Spear & Jackson has been owned by Hong Kong-based United Pacific Industries Limited.  The Bedford brand name is still used today on some files:

"Same quality as name brands, if not better."  While the files are at least apparently still made in England, this is a sad epitaph for a once great British tool maker.
Posted by The Duke at 9:27 AM

I was gifted a set of Bedford files from a neighbour some years ago. Excellent quality and mut be at least 30 years old. Sold out to the Americans it's the story of what was Great Britain.

What about Macadam, road builder, whose construction was "macadamised" and tar being added became "tarmacadam" abbreviated to "tarmac" ?