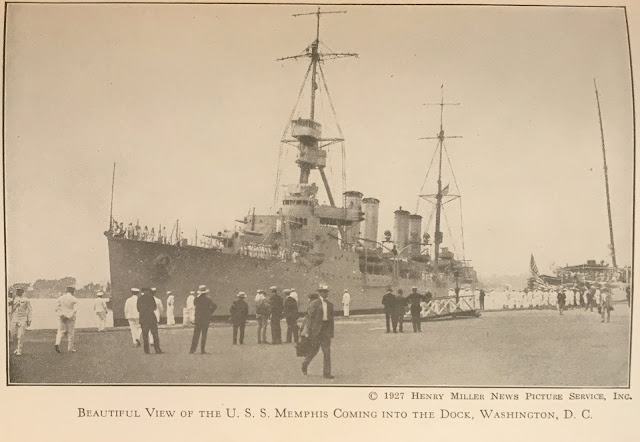 The cruiser USS Memphis was the fourth naval ship named after the city. The ship ordered in the late stages of WW1 and launched during 1924. It had been built during the transition period of war ships so the armament changed several times, the six left and right side casemount-mounted 6 inch guns were augmented with two fore and aft 2 gun turrets. Torpedo tubes were plated over and the mine laying capabilities discontinued. Anti-aircraft armament was added for WW2,

Between the wars the ship served all over the world including  hosting Charles Lindbergh on his triumphant return voyage across the Atlantic.
During WW2 the ship operated mostly in the south Atlantic and Mediterranean, acting as a host ship for various conferences. After WW2 the USS Memphis was retired and scrapped in 1947.
History here
Posted by Mister G at 11:24 PM