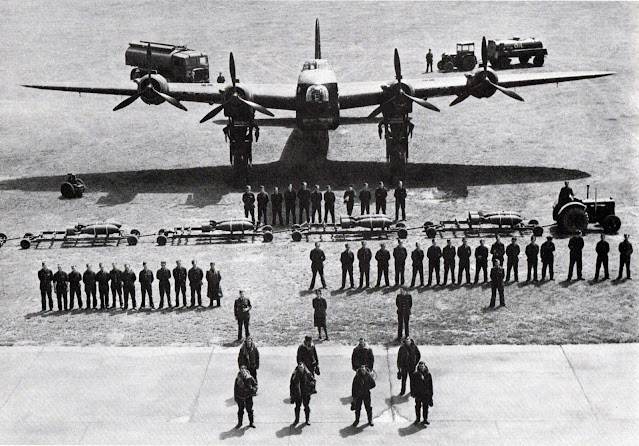 Behind the 8 man crew standing on the pavement are the 48 members of the ground crew. Front and center is the WAAF parachute packer. Behind the bomb transporter train are the 11 men of the loading crew.
Posted by Mister G at 11:21 PM No comments: 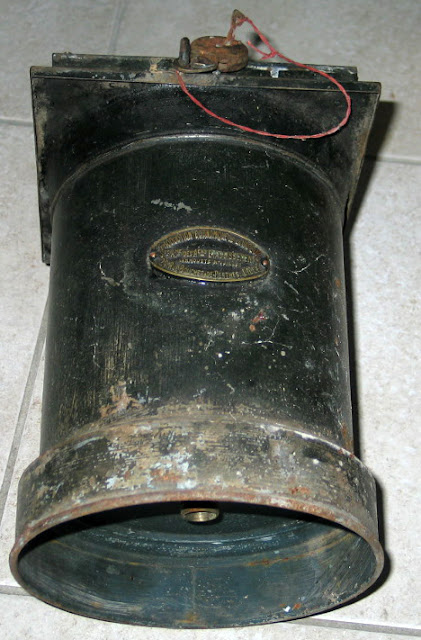 This incomplete and corroded housing has the general shape and size of a headlight (8 inches diameter and 11 inches long) but as parts seem to be missing it's hard to tell what it was.
Could it be an acetylene light? The address on the nameplate provides no clue (to me at least). 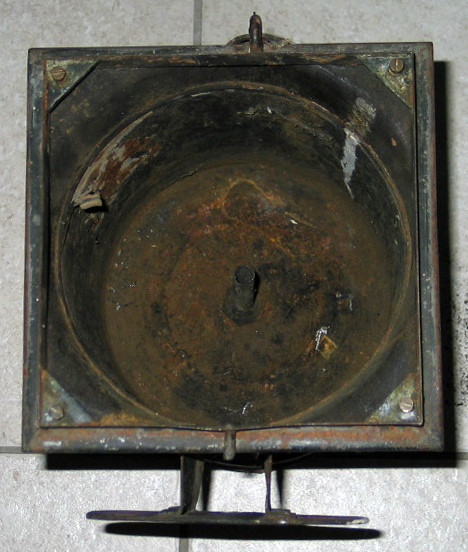 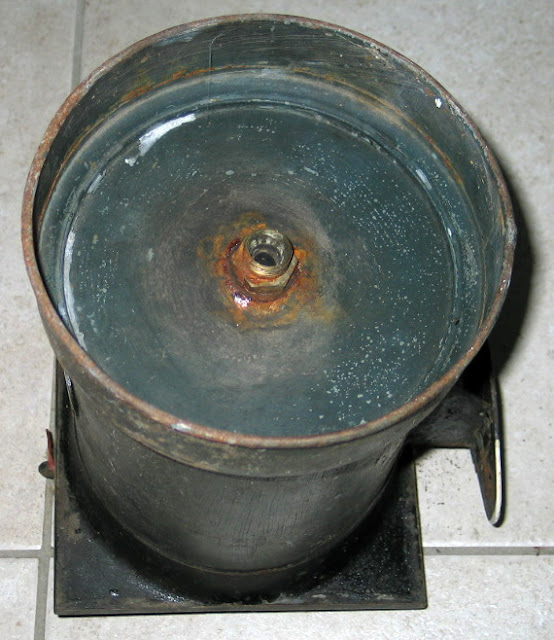 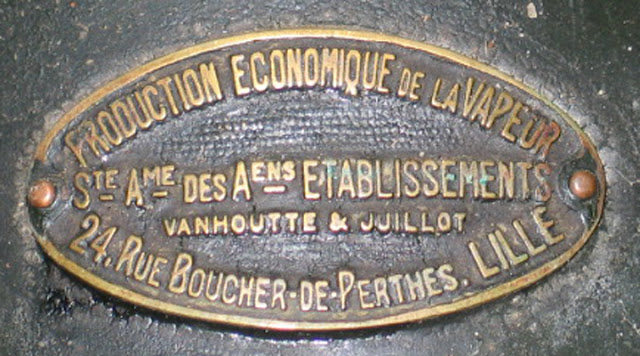 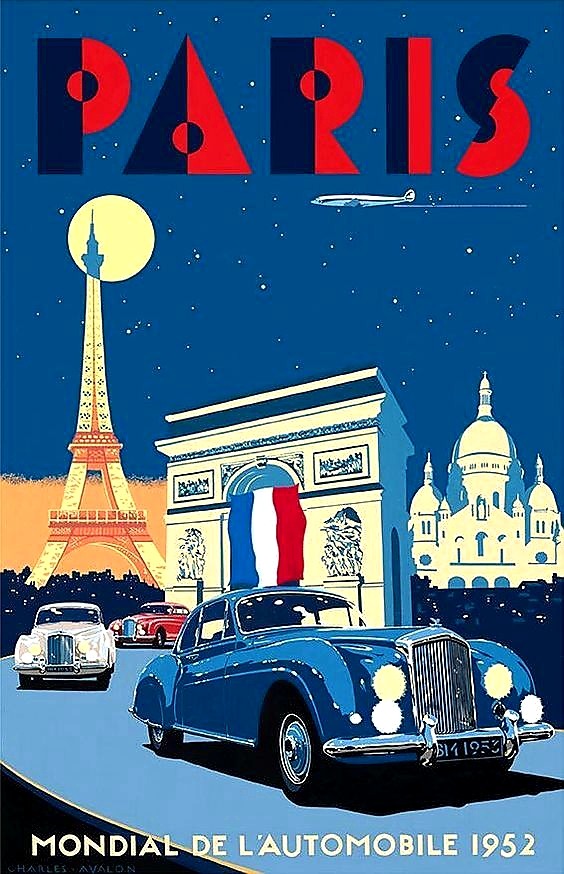 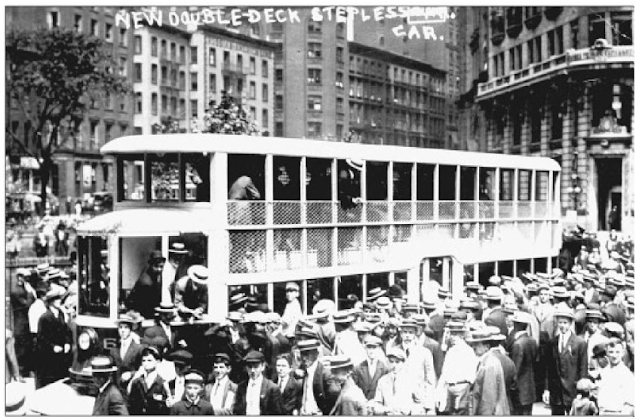 Number 6000 was an experiment in increasing passenger capacity while keeping crew costs down. It attracted a lot of interest when introduced at Bowling Green Park in 1912 and packed the passengers in but was not well liked, being referred to as the Broadway Battleship. They were expensive to build, were slow loading through the center located doors and stairways. 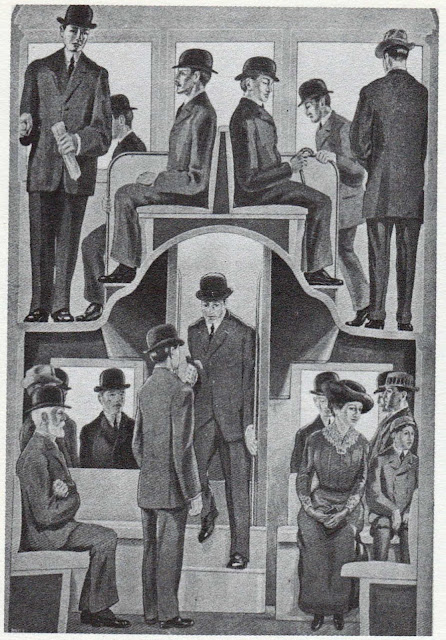 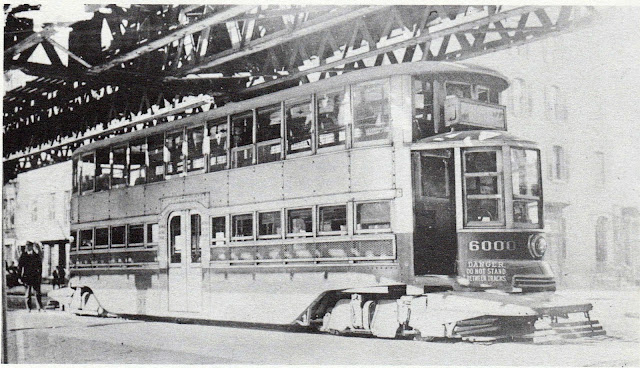 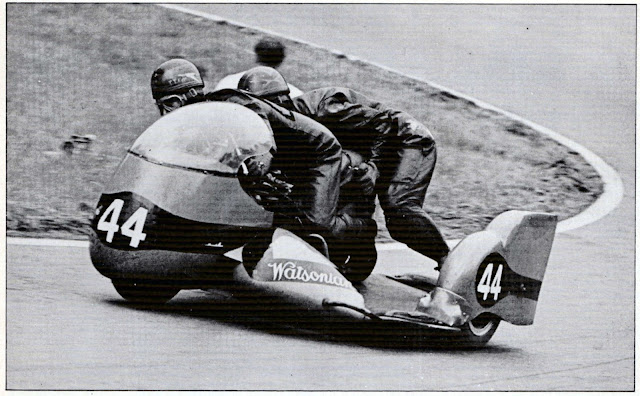 Chris Vincent and unknown passenger hard at work at the German Grand Prix, 1962
Posted by Mister G at 2:53 AM No comments: 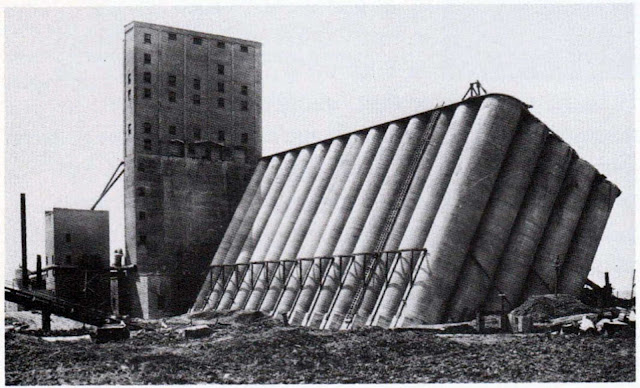 In 1913 The CPR built a large grain elevator in Transcona at the east side of Winnipeg Manitoba. The building was constructed of concrete, then a fairly new material, built on a floating foundation, and stood 92 feet tall.
During the loading of grain in the fall, the building sank into the ground and was leaning almost 27 degrees.  Compacting of the soil on the low side prevented it from falling all the way over. The 875,000 bushels of grain were removed over a three week period and a plan was established to right the structure.
The Foundation Company Limited of Montreal and Vancouver started work in December 1913, underpinning the structure with 5 rows of 14 piers each and excavating under the high side. Then, using a matrix of screw jacks, the building was brought back to a vertical position over a period of 10 months, rotating the entire building over the center row of piers. When the building was vertical it was 14 feet lower than when it was first constructed.
Whole story here. 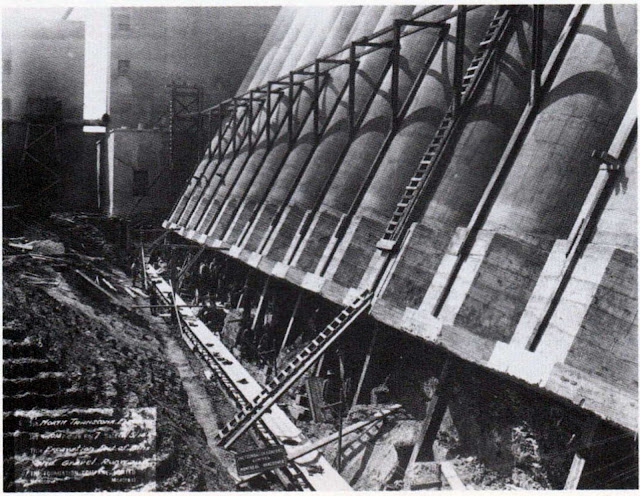 You might recognize this tractor, it's the 1952 8N that went through the ice last winter. I just replaced the carb on it (Chinese import, sigh) and had yet to make the mixture adjustments. So because I needed a tractor for another task, this seemed like a good time to do it. I stepped on the clutch pedal- which didn't feel right- and started the engine. I let it idle a minute to get the oil where it needs to go, and put it into first gear, Grunch! and I was moving. I hadn't released the clutch, Akk! Had to scramble to shut the engine off before I ran into something. Crisis averted, I had to figure out what was going on.
The pedal kind of mushes to the floorboard without releasing, but pretty much everything is hidden inside the bellhousing, the tractor has to be split to see inside. May as well do it! 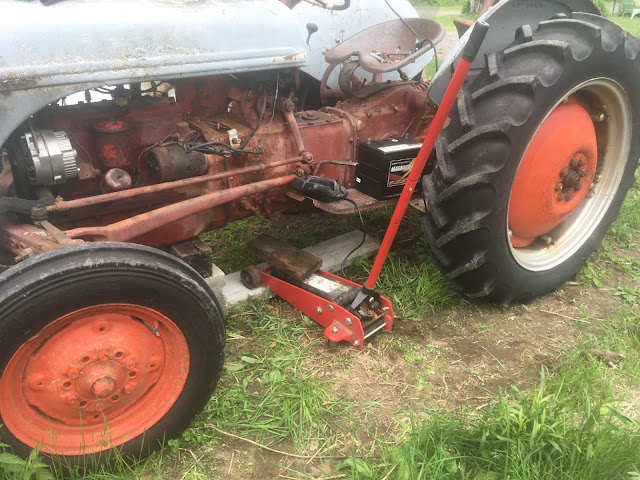 First support the front half on blocks, the rear on a trolley jack. Battery out and remove seven bell housing bolts. 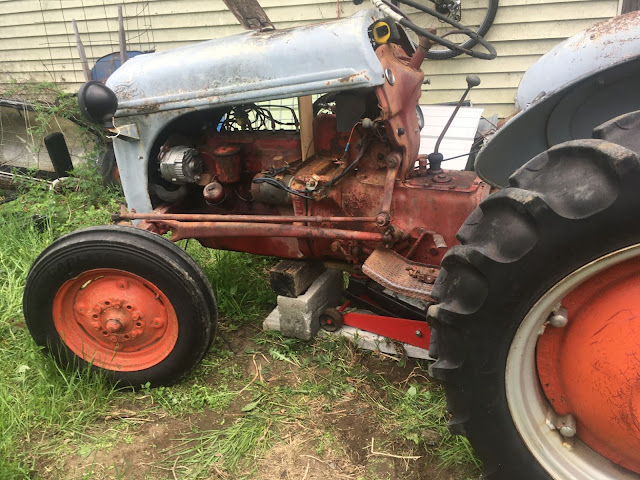 Tip up and prop up the hood, remove one end of the radius rods and tie rods. 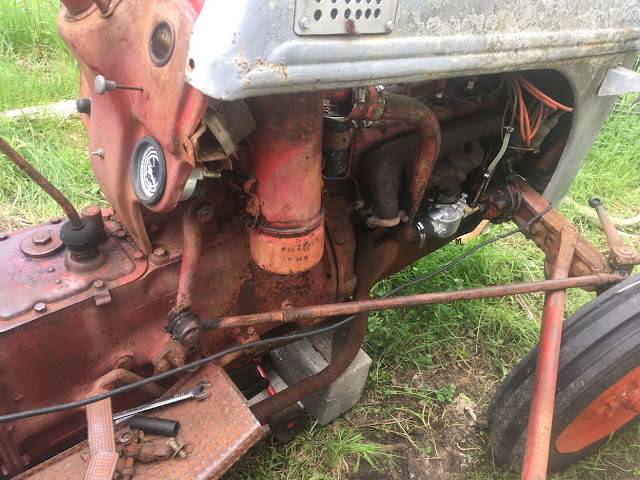 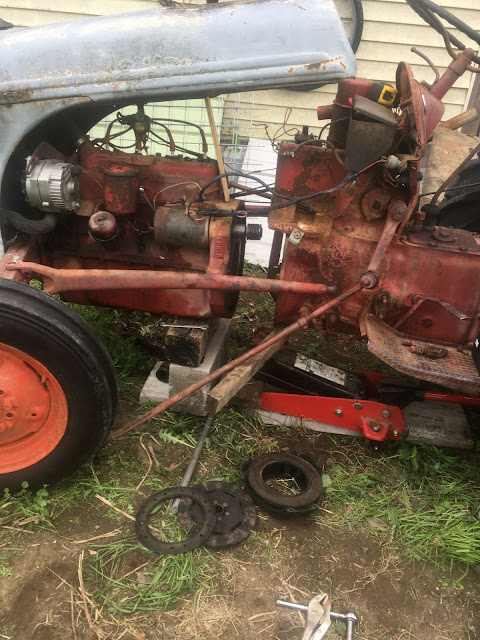 Pry the two halves apart about 6-8 inches and a look inside shows the throwout bearing is OK. The clutch comes off the flywheel with six bolts and- about after about an hour of working inefficiently...there's the problem- the rivets have sheared on the disc and the plate comes out in bits.  If it is original, it's lasted 68 years.
One of the nice things about this model tractor is that most parts are still available, and a new plate has been ordered.
Posted by Mister G at 10:37 PM 8 comments: 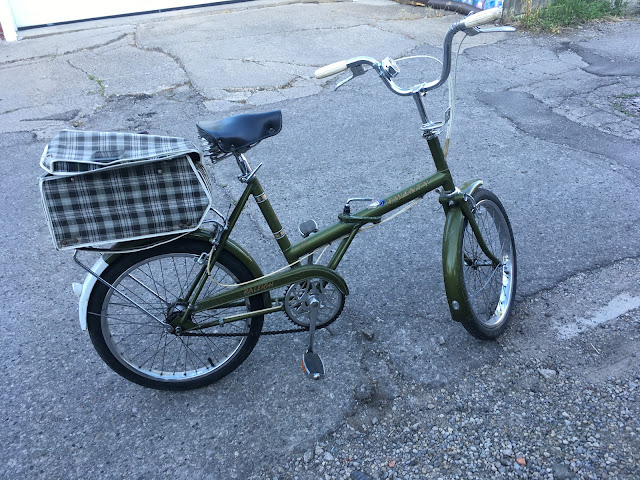 A friend dropped by, she had just picked up a nice little folding bike. It's in great shape and came complete with a period plaid vinyl zippered bag on the carrier. Even the original dealer sticker is in good shape. Bloor Cycle used to be THE big bicycle dealer in the city.
The Raleigh 20 was a very popular model built in both folding and non-folding versions from 1968 to 1984.  Easy to mount and dismount, its small size made it an ideal short range. 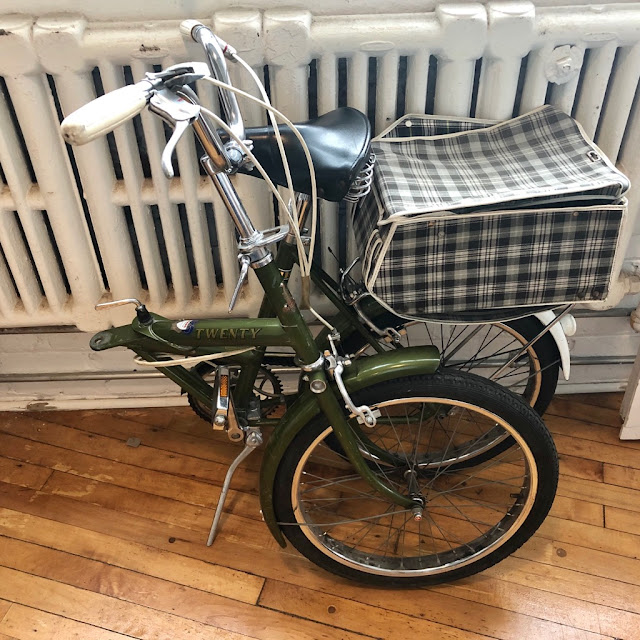 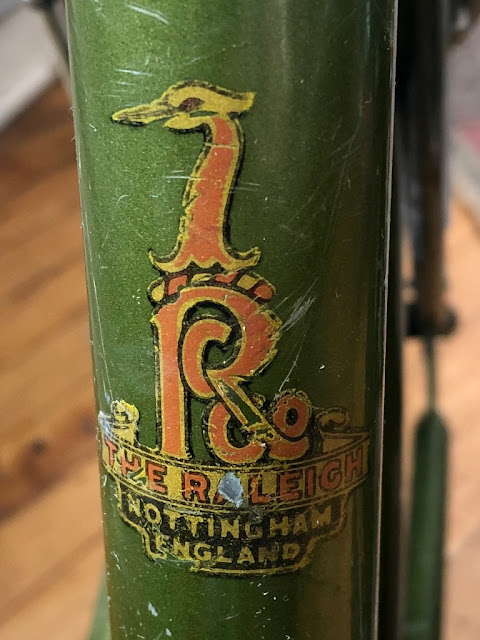 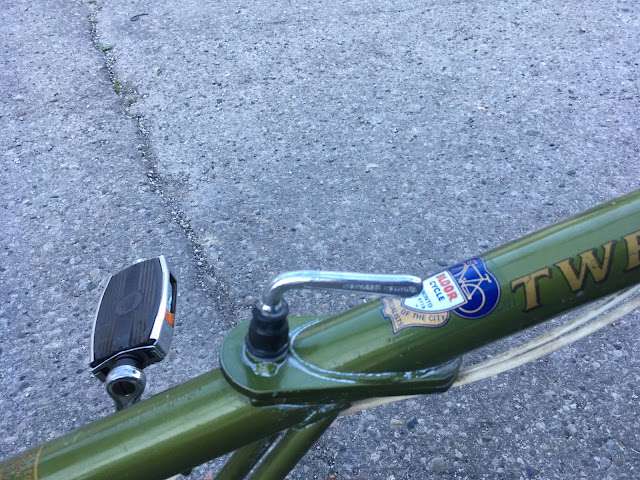 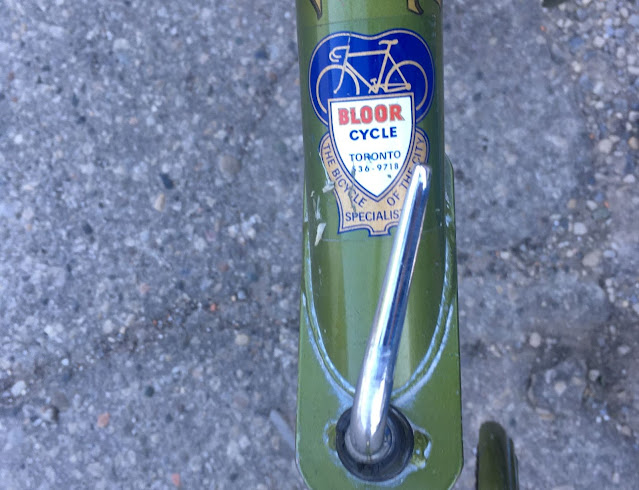 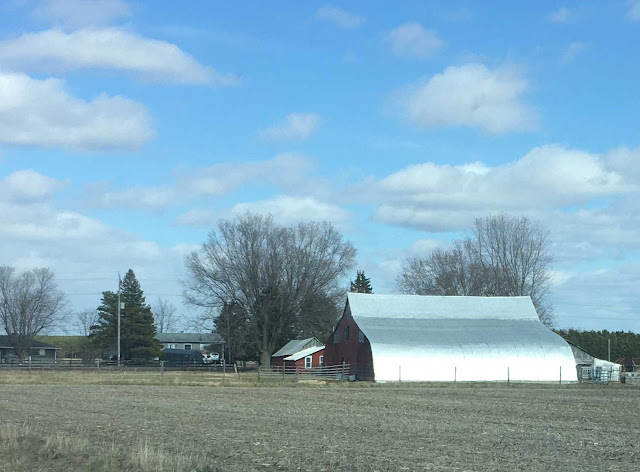 This unusual structure is located near Embrun, Ontario. From a distance I guessed it might be a modern church- modern as in the 1960s or 70s. But no it is a just a barn with additions. I didn't ask anyone but I could guess the conversation that resulted in this unique structure.
"We need room, have to build a bigger barn."
"Hmmm,  Bob on the next concession has a empty Quonset building , we could buy that and maybe erect it beside the existing barn?"
"I have a better idea.... hold my beer." 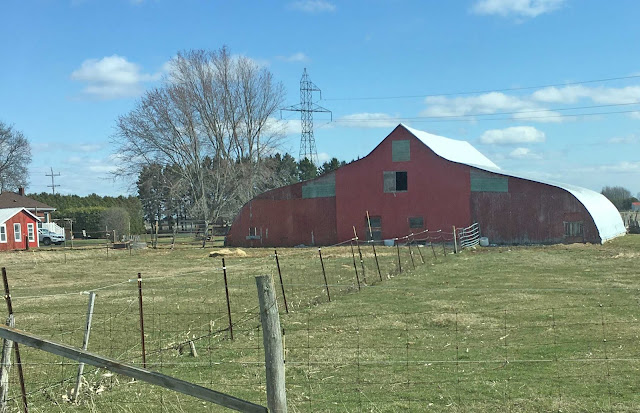 We used to make things in this country #313, Wagner Electric 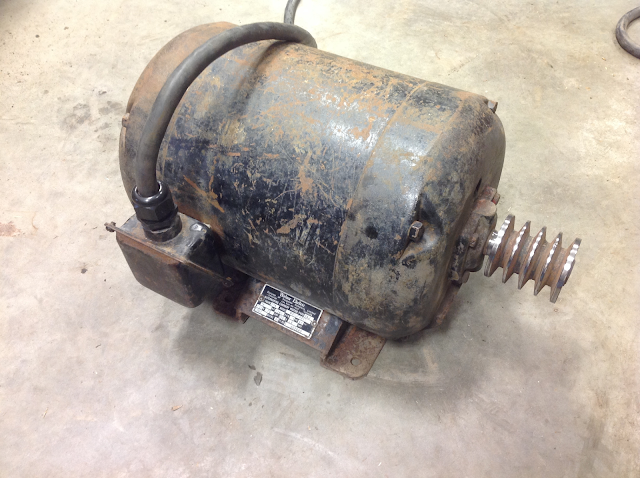 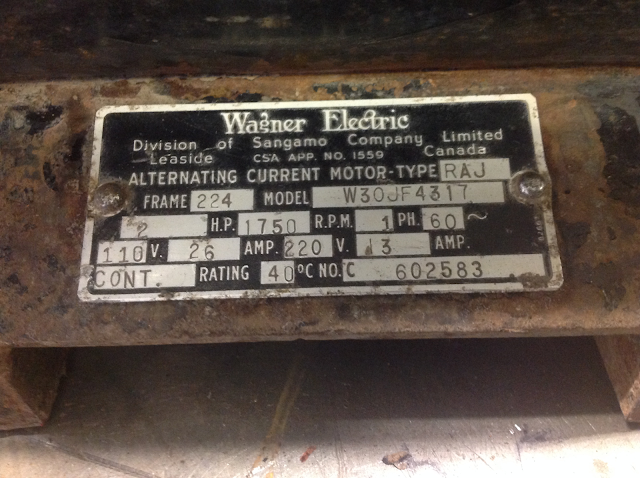 This motor was found buried in the mud at a dumpsite in Arizona, cleaned up and plugged in, it ran perfectly. In these days of integrally manufactured devices, motors like this have much less value than they used to. Surplus motors often found their way into home shops as power for grinders, lathes and other tools.
Wagner Electric was founded in 1891 at St Louis, where they made motors and electrical equipment. The Canadian branch of the company was acquired by Sangamo in 1910, the factory was located on Adelaide St. W. Toronto, probably at Stafford Ave. Space was soon at a premium and a new building was bought, located at 183 George St, Toronto, During the second World War, with production again running at full speed, more space was required and the company was able to relocate on Laird avenue in Leaside, a new industrial and residential subdivision of Toronto. The company grew, expanding to 180,000 sq. ft. and employing 825 people.
In 1970 the Sangamo motor business was purchased by Prestolite who moved the company to Guelph.
50 years of Sangamo history book here. 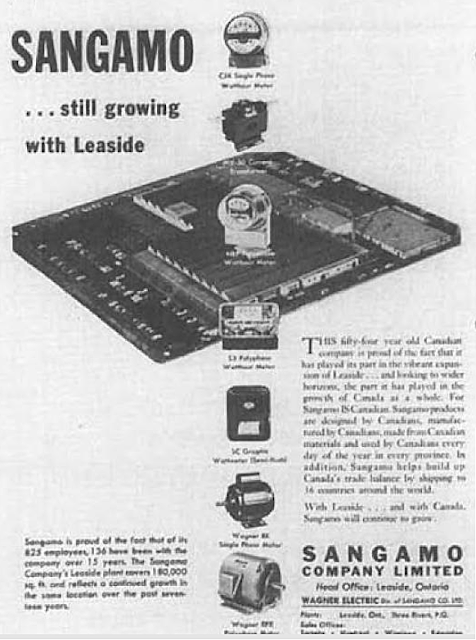