Raymond Murray Patterson was born in England in 1898.  During World War I, he served as an artillery officer.  Captured in March 1918, he spent the next 8 months as a POW.  Afterwards, he attended Oxford and following his graduation began work in the Bank of England.   His father resurfaced after decades away on various adventures, leading Patterson to take stock of London as "a vast human ant heap through which the inmates scurried with set, expressionless faces, tied to some fixed routine."  At age 26, he left for Canada, and in 1928, using maps prepared years before by the great R. G. McConnell, he ventured into the unexplored South Nahanni River in the Mackenzie Mountains, returning the following year.  ("Nahani" was the name given to the inhabitants of this area by the Slave Indians of the lower Liard, and means "people over there far away.) He took the first known photographs of Virginia Falls, twice the height of Niagara Falls (nowadays they are visited by about 1000 people each year.)  His diary was the basis for his first book, The Dangerous River,  originally published in 1954.

This is a story of self-reliance, appreciation of astounding beauty, and Patterson's conviction that "this country was too good to miss; it was practically our duty to ourselves to see it while it was still young and before civilization could get its dirty paws on it."

The dangers inherent in travelling in this area at that time were many: roaring rapids in the spring, breaking through ice at minus 50 degrees (F) in the winter, falls while seeking routes around obstacles, encounters with dangerous or angry animals, the ever-present need to hunt (with his Luger pistol and Mannlicher rifle) in order to eat, and to protect your food stocks from predation by wolves and wolverines. Patterson's stories and observations are enthralling.  For example, he tells of one night he spent in the cabin with two other prospectors.  He writes of one:  "Mulholland sat on the dry part of his bunk (rain was falling on the western half of it) and shot mice with a .22 rifle.  'Don't either of you two make any sudden move,' he said, 'because if I'm drawing a bead on a mouse and one of you sticks his head up into the sights, I won't be responsible for what happens.'  The supply of mice seemed unfailing so we moved with caution."  Still, the stunning beauty of the mountains and valleys more than compensated for the risks, and it didn't hurt that the price of furs was very high at that time.

Of the vanishing indigenous culture, he observed:  "I camped late, that evening, on the site of an old Indian camp of the summer, and I found there, as we always did in those days, beautiful little boxes and baskets of birch bark, sewn with spruce roots, used for berry picking or some such purpose and then just thrown away:  the women would make fresh ones at their next camp and not bother to carry these with them.  Birch bark with its sweet scented oil is the finest kindling in the bush:  we used to pick these baskets up, throw them into the nose of the canoe and use them for lighting fires.  Now I wish I had kept a few, for only the old Indians know how to make them--the young ones won't learn."  Later, as he picked up more of these, he called them "the last products of a vanishing culture which we took for granted and thought would go on for ever." 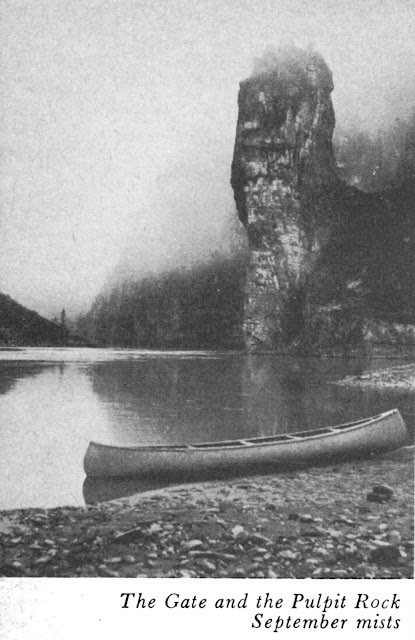