Over the years I've picked up a few Williams "Superrench" wrenches.  Recently I found some more, which got me thinking about this company.  Below, "ribbed wrenches":

Below, plain "alloy" ones: 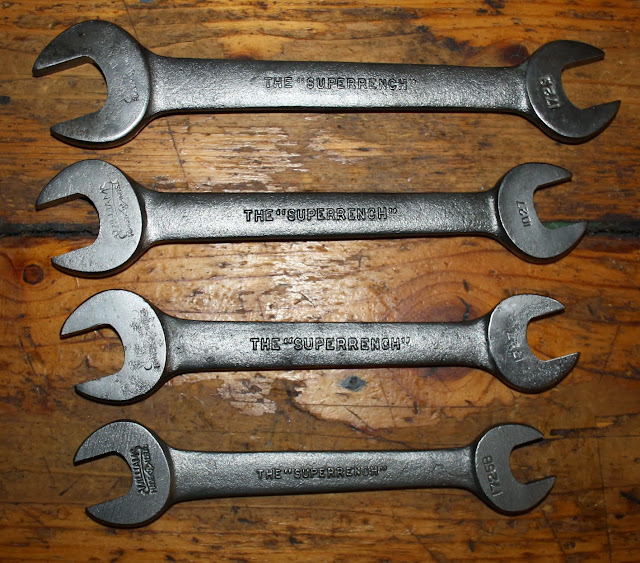 According to the very authoritative and exhaustive Alloy Artifacts website, the tradename "Superrench" was first registered in 1925.  Information on their site also indicates that my plain "alloy" wrenches were probably manufactured sometime between 1942 and 1947, and the "ribbed" wrenches were made between 1952 and 1959.

The company also used the "Superrench" name (although no longer in quotation marks) on box-end and combination wrenches:

The Williams company apparently liked the prefix "Super", also offering "Superjustable" wrenches, "Supersockets," "Superratchets" and, if you had the cash, an entire collection of tools in a "Superchest."


They made tools for other companies, such as the 629 Special below made for Airco:

They also made pliers, both in the U.S. 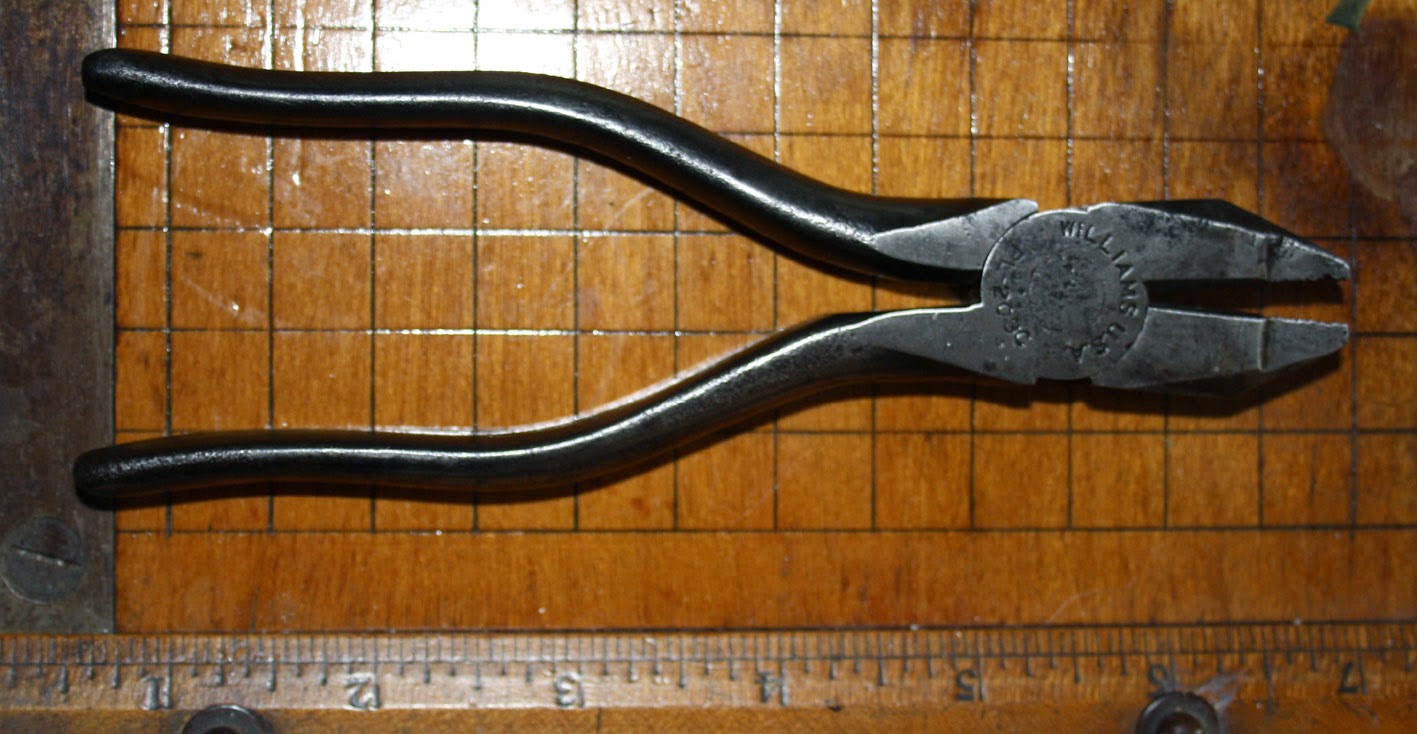 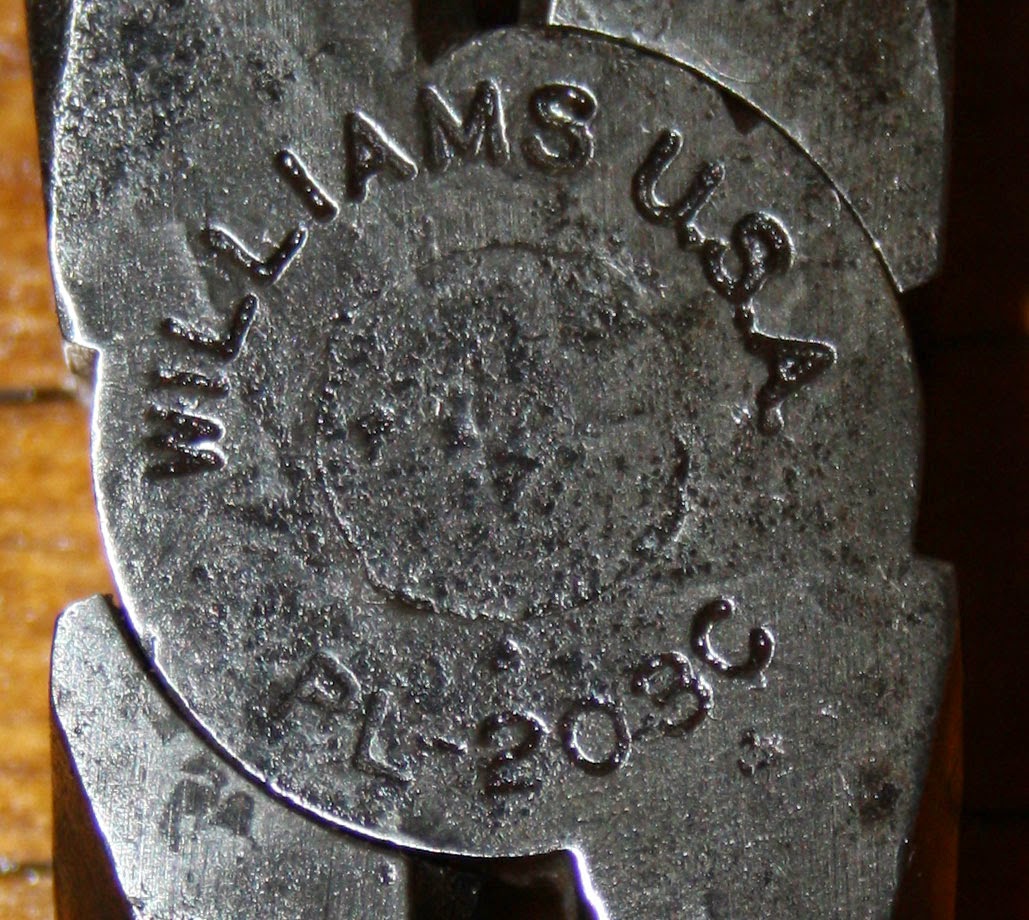 Over the years, their tools were identified by various trademarks and logos: 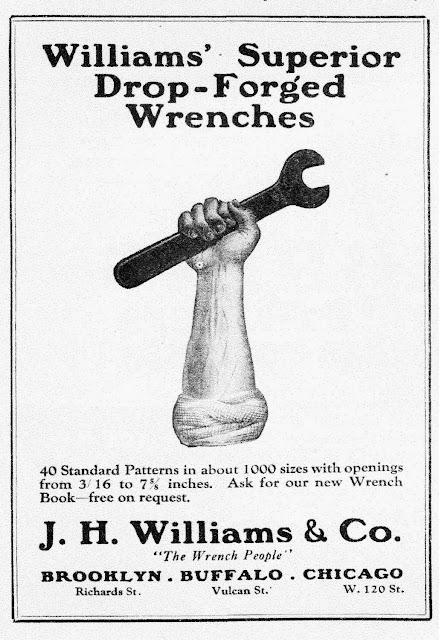 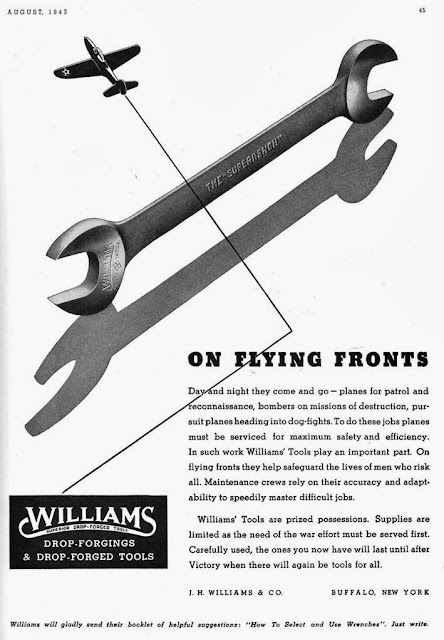 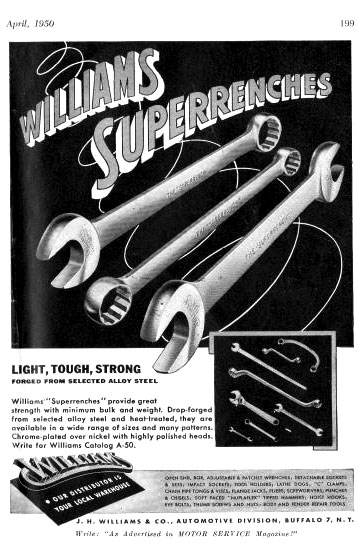 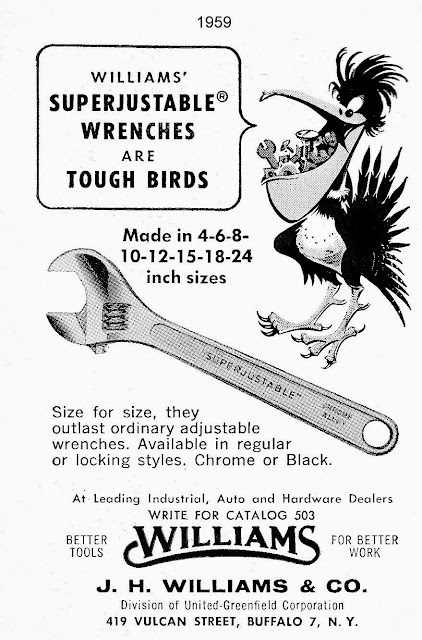 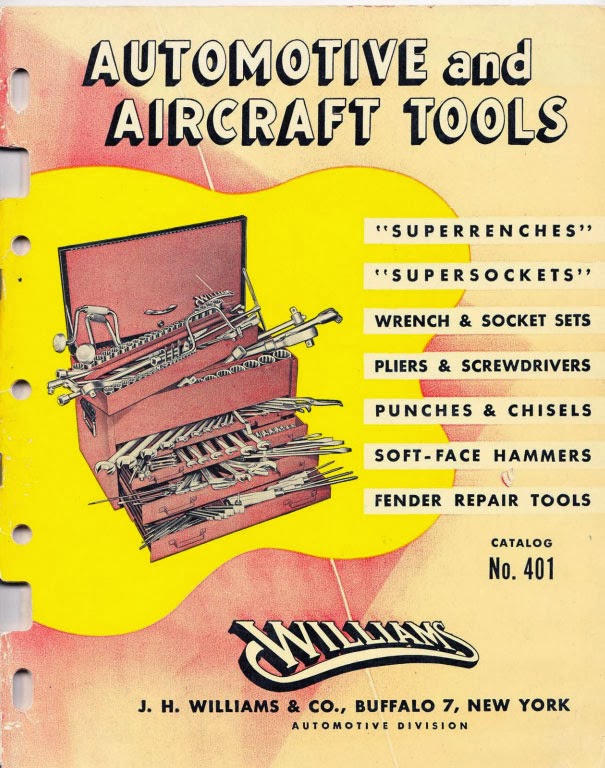 For a pdf copy of this catalogue, go to the Internet Archive.

James H. William was born in Fort Plain, New York in 1845. As a young man, he became a partner with his cousin E.W. Bliss in the firm of Bliss & Williams, which eventually became the famous industrial machine tool company of E.W. Bliss (notable especially for their production of torpedoes for the U.S. Navy in the Spanish-American war and in both world wars).  In 1882, he started his own business in Flushing, Long Island under the name Williams & Diamond.  In 1884, it moved to Brooklyn and became J.H. Williams & Co.  Incorporation followed in 1885.

The company was among the first to offer mass-produced drop-forged tools, the 15-degree angle wrench, and heavy-duty slugging wrenches (back in the day when this kind of fisticuffs was legal).   Williams operated a very clean factory, with dripping oil being caught in cans and recycled, fire extinguishers and sprinklers throughout, a factory fire department and, in 1893, even installing shower baths to promote health and cleanliness in his workers.  A very enlightened employer for that era, he also instituted a mutual aid society into which employees could pay, and out of which funds were dispersed in the event of sickness or a death in the family, an early form of what we today call "employee benefits."  Williams died tragically in 1904 from  what was then called "apoplexy" or what today would be called a stroke.

In 1909, the company employed 400 people, a sizeable workforce. The company subsequently built a factory in Buffalo (on Vulcan Street!) around 1914, and then moved its corporate headquarters there in 1919. (The site is now occupied by one of GM's plants.  For more on Buffalo's industrial boom years, see Plant 5:  Farrell-Birmingham & the Rapid Reversing Gear Engine.)

Somewhere along the line the company was acquired by United Greenfield, but I can't find any information on exactly when this occurred.  Williams had arrangements with another large tool maker of the time, Whitman & Barnes of Akron, Ohio, as shown by the markings on the monkey wrench below: 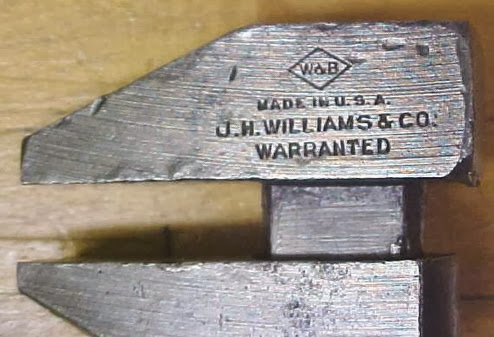 In 1902, it sold this factory to J.H. Williams.  According to the ad below, they made hammers there:

The picture is a little muddied, though, as the 1921 hammer ad above indicates that Williams was "formerly the Canadian Division of The Whitman & Barnes Mfg. Co."  At some point, United Greenfield also owned Whitman & Barnes, so it's anyone's guess as to how the tangled ownership of these companies worked.  In any event, United Greenfield was in turn acquired in 1968 by the aerospace giant Thompson Ramo Wooldridge of Chicago, better known as TRW.

Sometime during further corporate shakeouts in the ensuing decades, Williams disappeared for a while before being sold to Snap-On in 1993.  As of 2011, the J.H.Williams Tool Group was renamed Snap-On Industrial Brands.  So, although Williams no longer exists as an individual tool manufacturer, the name lives on as one of Snap-On's  brand names.

My Dad worked there from 57-thru 87 ish when the plant closed its doors. We left Buffalo to prusue better things. I have a alot of Willams tools that I use today from my father. They are well made made antique tools that serve a great purpose even to this day. I love them and wouldn't get rid of them for nothing. Thanks for this articale very well done and most informative.

excellant reading,wish there were more.

They made them by the thousands, if not tens of thousands.

I just found an ad for these guys in a Janes Fighting ships of 1919. Would ve happy to send a pic of it through if interested

Sure, love to see it!

I got a leather jacket from this plant!!

my dad passed away in june 27/17.i was cleaning up his shop,and went thru his roller cabinets.it was loaded with good quality Williams tools.Combo wrenches,offset open ends,ratchets,the whole nine yards.i remember he married an American years ago,She had friends that worked at Williams tools,hence,it looks like they set up my dad real good.They are American quality,I can feel it in my hand.Thanks to Williams and my dad,they are going no where.

Could you send a picture? Love to post it.

Recently my dad gave me a whole mess of tools owned by one of is uncles among them are several Williams wrenches including a few that have "USN" stamped on them. I've also picked up a few at stores selling used building supplies. These wrenches have become my go to wrenches. They just don't make tools like they used to.

It looks like they did some contract work. I have a Williams #367 S wrench, 7/8"x11/16". On the opposite side from the name it is stamped "SPCO". The SPCO being the abbreviation for the Southern Pacific railroad.

Thanks for the info! Are the letters stamped or cast in?

If Duke is reading this, we have been looking for a living member of the Williams family. Any ideas? Harriet Williams, wife of James Harvey, donated the money to build a beautiful set of historic structures and central landscape that are under threat of destruction. We are trying to save this property and would love to meet a member of the Williams family. If yes, how can we communicate? Best, Jenn www.arlington12603.org

Unfortunately the Duke passed away in 2018. This post gets a lot of views, hopefully someone will respond! Thanks for your note and good luck!

I worked for TRW and was assigned to start a new automotive tool line using our JH Williams plant in Buffalo. JHW had just opened a new modern socket extrusion facility in Georgia. They needed more volume for it to thrive. I became the TRW Powerforged Hand Tools Product Line Manager working out of Cleveland OH. I have full set of tools , catalog and all kinds of marketing items. We sold to auto parts stores replacing competition where tools were displayed on boards along the walls and in sets. Sold over 2,000 stores through about 60 distributors in 1979-1983 timeline. Then came low cost Japanese imports and just about all American made firms collapsed leaving Snap-on and MAC Tool due to personal mechanics service and credit. TRW exited by selling all its inventory to Autozone. One of the best times of my careet

Thank you for the first band information, I'm glad these stories get told.