August Mayes was a stone mason and brick layer who, in 1874, began making his own levels.  When others began to ask him for his levels, he got his son involved in making them.  In 1917, John and two other brothers founded the Mayes Brothers Tool Manufacturing Company in Port Austin, Michigan on the southern shore of Lake Huron. In 1957, the company moved over 700 miles south to Johnson City, Tennessee.  Daniel Mayes, the President of the firm at the time, complained that "a political climate damaging to industry" in Michigan was the reason for the move, although it also appears that Johnson City, the "Little Chicago of the South," offered the company a municipally-built plant which, presumably, Port Austin wasn't prepared to match.  In any event, ten years later in 1967 the firm was sold to Great Neck Tools of Mineola, New York.  The brand continues today as the second largest manufacturer of wooden levels in the U.S.  Oh, and they also used to make coping saws: 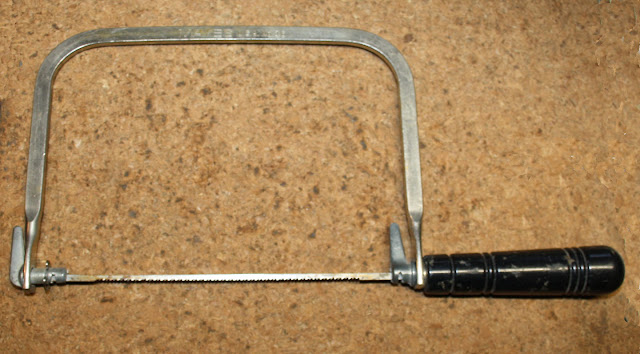 Hardware Reporter V 59, 1913 says they were operating in Detroit

My Grandfather Raymond Mayes had a level company (R Mayes and Son) in Detroit Michigan in the 1950's. Does anyone know ifif Raymond Mayes was originally part of the Mayes Brothers company in Port Austin Michigan?

Thanks for your question, hope someone knows!

I am not sure but I have been trying to see if there was a connection between R. MAYES Levels in Farmington, MI and Mayes Brothers in Port Austin, MI myself.

My R Mayes level shows the company in Lake Orign, MI written in Red right on the Level

Sorry about my late response, but I just found this. I grew up in Port Austin. My father, Raymond J. Mayes, and my uncle Edwin Mayes owned and operated Winder's Products Co., which produced the glass vials that were incorporated into the levels (and some other equipment). They sold vials to Mayes Bros. Levels, and to Port Austin Level and Tool, as well as many other tool makers.

I know our family was related to the family that owned Mayes Level, but for the life of me I can't remember the familial ties. My grandpa, who died before I was born, also owned the grocery store in Port Austin (an IGA for many years), and my grandma started the Tastee Freez in Port Austin, I believe after her husband passed.

Thanks to all who have contributed to this post. I have really enjoyed reading about the history of this business and its ties to Port Austin.

Great addition! Thanks for all the information. We'll get to the bottom of this!