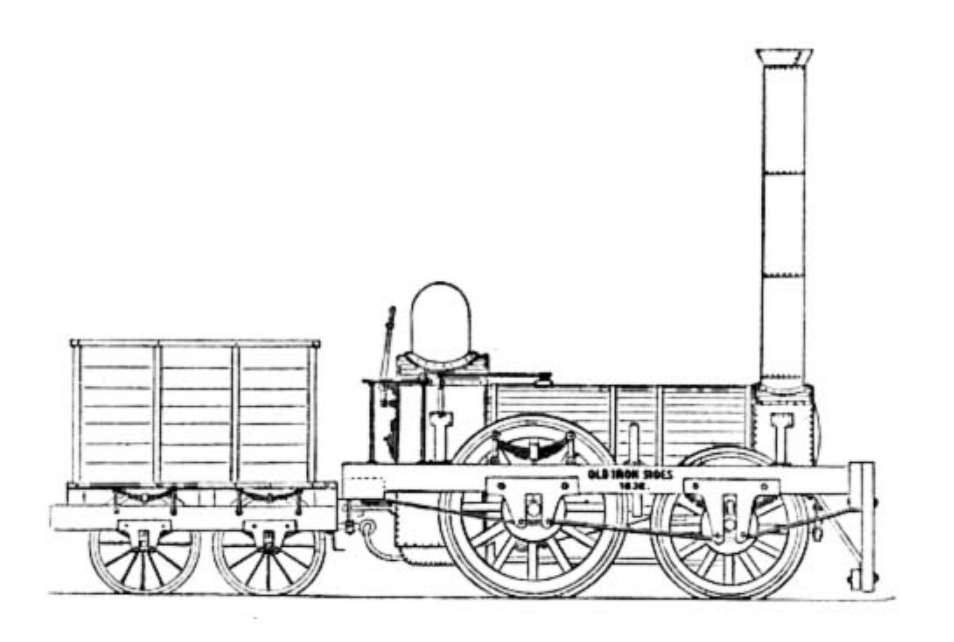 Matthias Baldwin of Philadelphia moved out of the jewelry-making business in 1825 and in partnership with machinist David Mason started making bookbinding tools and cylinders for printing cloth. Soon, business had grown enough to require a steam engine to power the machines in the factory. After buying an (unsuccessful) steam engine, they built their own. This vertically-oriented engine was very successful, bringing orders for similar machines.
By 1830, news of British experiments in railway steam power had reached the US and from drawings and descriptions,  Baldwin constructed a model locomotive for the Philadelphia Museum, large enough to give rides to 4 adults at a time in two towed wagons around a circular track. Demonstrating this toy brought an order from the Germantown and Norristown railroad for one in full size.
After scouting out and studying a nearby unassembled locomotive imported from England, he built "Old Ironsides" pictured above. Weighing about 5 tons, the four wheeler had 54" diameter driving wheels located at the rear, powered by nearly horizontal cylinders located between the smokebox and the front wheels.
According to the Baldwin catalog, the sketch of the "Ironsides" is by a Mr. H. R. Campbell, who was the Chief Engineer of the Germantown and Norristown Railroad when the locomotive was placed in service. Although it suffered from teething issues, Campbell helped Baldwin work through these problems and helped develop the design into a successful locomotive which was used on the line for the next twenty years.
The United States Gazette of Nov. 24th, 1832, remarked:
"A most gratifying experiment was made yesterday afternoon on the Philadelphia, Germantown and Norristown Railroad. The beautiful locomotive engine and tender, built by Mr. Baldwin, of this city, whose reputation as an ingenious machinist is well known, were for the first time placed on the road. The engine traveled about six miles, working with perfect accuracy and ease in all its parts, and with great velocity."
The Chronicle of the same date noticed the trial more at length, as follows:
"It gives us pleasure to state that the locomotive engine built by our townsman, M. W. Baldwin, has proved highly successful. In the presence of several gentlemen of science and information on such subjects, the engine was yesterday placed upon the road for the first time. All her parts had been previously highly finished and fitted together in Mr. Baldwin's factory. She was taken apart on Tuesday and removed to the Company's depot, and yesterday morning she was completely together, ready for travel. After the regular passenger cars had arrived from Germantown in the afternoon, the tracks being clear, preparation was made for her starting. The placing fire in the furnace and raising steam occupied twenty minutes. The engine (with her tender) moved from the depot in beautiful style, working with great ease and uniformity. She proceeded about half a mile beyond the Union Tavern, at the township line, and returned immediately, a distance of six miles, at a speed of about twenty-eight miles to the hour, her speed having been slackened at all the road crossings, and it being after dark, but a portion of her power was used. It is needless to say that the spectators were delighted. From this experiment there is every reason to believe this engine will draw thirty tons gross, at an average speed of forty miles an hour, on a level road. The principal superiority of the engine over any of the English ones known, consists in the light weight,—which is but between four and five tons,—her small bulk, and the simplicity of her working machinery. We rejoice at the result of this experiment, as it conclusively shows that Philadelphia, always famous for the skill of her mechanics, is enabled to produce steam-engines for railroads combining so many superior qualities as to warrant the belief that her mechanics will hereafter supply nearly all the public works of this description in the country."