The advent of the steam yacht transformed the yacht market but it was anything but convenient. Expensive to run and maintain, the steam engine required licensing and inspections and required a qualified steam engineer to operate it. In addition, cruising was a slow process, the boiler required time to come up to steam. In the 1880's and 90's, the internal combustion engine was early in development, expensive and not yet at a dependable state.
In New Jersey a Frank W. Ofeldt was working on his own engine using a oil byproduct, naptha gas. Instead of water, naptha filled the boiler, it was also used as the fuel to heat the boiler. Upon heating, the naphtha rapidly turned to a pressurized gas which was used to act against the pistons in the engine in the same manner as a steam engine. After passing through the cylinder, the gas then went into a pipe under the boat, cooled down and returned to the boiler as a liquid.
As  pressures were much less than a steam engine, everything could be built lighter and best of all a licensed engineer, licensing and inspections were not required.  The owner-operator could master its operation in a short while using only the manual.
It seems strange that boiling water would require a licence while boiling gasoline did not. The cost advantages of the the system allowed middle class boaters to own a power boat for the first time and by 1900 there were at least 3000 naptha powered yacht in use. Despite the maturing of the internal combustion engine naptha-powered yachts were still being sold in 1910. 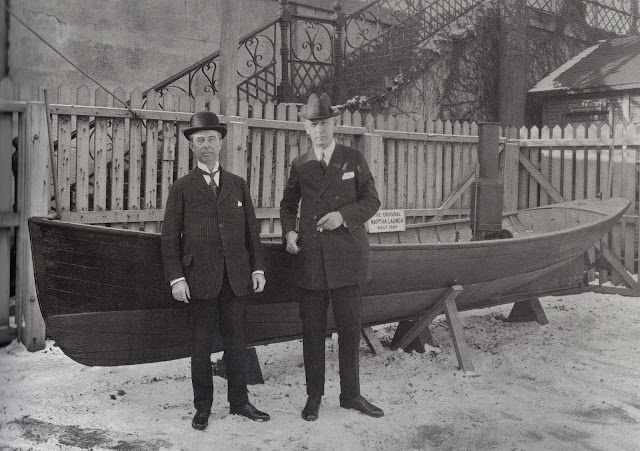