One of our vices is vises, Wheelwright vise. 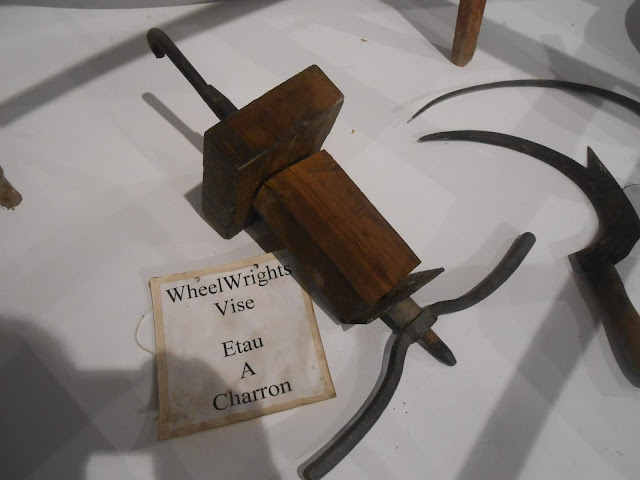 This is an item displayed at The Brome County Museum in Knowlton Quebec.  It is identified as a Wheelwrights Vice but we can't figure out how and where it might be used.  The action seems to be between a steel hook and a block of wood. This might imply a way to pull or tighten a cable or rope, neither of which really makes sense. Ideas welcomed!
Posted by Mister G at 11:40 PM

Only a wheelwright would know for sure, but it looks to me like the clamp used to hold a wheel to a bench while it was being repaired. The workbench could look like an extra wide sawhorse or a large stool with the legs splayed out. The wheel could be clamped to the bench by running the bolt of this clamp through the hub. The hooked end would be attached to an eye bolt in the floor, so as the large wing nut is turned the wheel hub is held to the bench, and the bench is held in place as well, but can be moved as needed.

Thanks for the comment! That does make sense. I suspect it could have been used to clamp onto a spoke or possibly the rim as needed. Much appreciated.