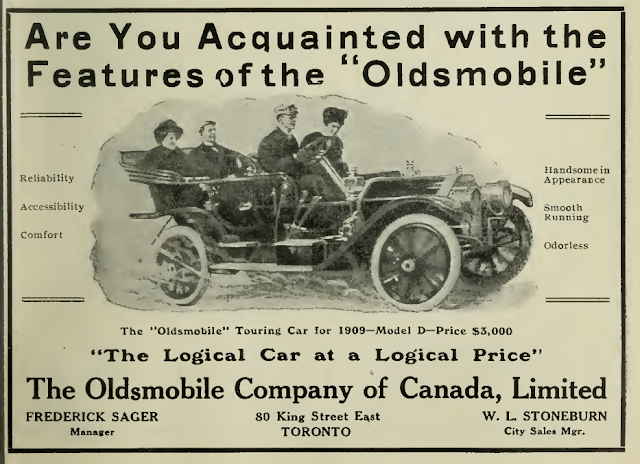 From 1904-1907 Oldsmobiles had been made under license in St Catherines. This was the one cylinder Curved Dash Olds Model N, selling for $650.
A couple of years later here is an ad for a real automobile, just after GM took over the company in 1908. Price has gone up a bit- $3000- probably the price of an average house. For comparison, the average wage in Canada was less than $600 per year.

Fast forward to 1985, Oldsmobile had their best year ever,  selling nearly 1.1 million vehicles- and the brand was killed off as unprofitable in 2004.
Posted by Mister G at 8:32 AM

Ooops! Fixed. antique fonts, aging eyes... thanks!
I recall my father bought a 56 Chev (new) for about as much money as he made in a year. That seems to be a rough guide ever since, an average full size car costs about as much the average yearly pretax income. Though a quick google shows a 1985 Cutlass Ciera base price at $10k? More searching is required. I'll get back to you.