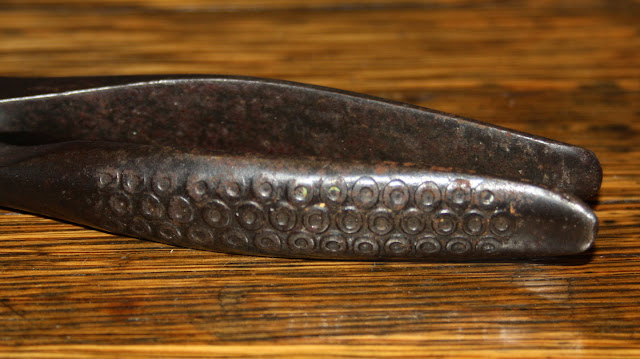 I recently found the pair of "Vacuum Grip" pliers pictured above, marked as "Snap-on, Newport Pennsylania."  Peculiar, because the Snap-on company is associated with Kenosha, Wisconsin.  Below, another set of Vacuum Grip pliers, this time only marked "Snap-on, U.S.A."

Back in the day, different manufacturers offered distinctive handle patterns on their pliers to provide better grip and, I think, to make their tools more distinctive.  See an earlier post on this tradition.

Based on their distinctive suction-cup handle pattern, these "Vacuum Grip" pliers were originally made and marketed by the Forged Steel Products (FSP) company of Newport, Pennsylvania.
This company was founded in 1920 in Newark, New Jersy but in 1922 moved to a better factory at Newport, Pennsylvania.  Looking for a better way to distribute their tools, the president of the company (who had been involved with Newport-based Kraeuter & Co.) approached Snap-on. Snap-on was looking for way to expand their tool offerings beyond sockets and handles. In 1924, the two companies signed a non-exclusive agreement, such that both Snap-on and FSP had their pliers made by FSP under the Vacuum Grip name.  The Snap-On No. 137 General Use pliers were first introduced in 1926 and combined slip-joint pliers with a wire cutter.

Eventually, FSP began making open-end wrenches and punches for Snap-on under the new Blue-Point range.  In 1945, FSP became a subsidiary of Snap-On. The Newport name remained on the tools until 1949, and production was eventually moved to other locations. The Newport factory closed in 1958.  The "Vacuum Grip" trademark persisted until the early 1960's, when it was dropped in favour of plastic-coated handles.

Below, a video link to a guy who only collects Vacuum Grip branded pliers:

Just goes to show--there's something for everyone!

How do I get in contact with dale ruby? I have an unusual pair of pliers