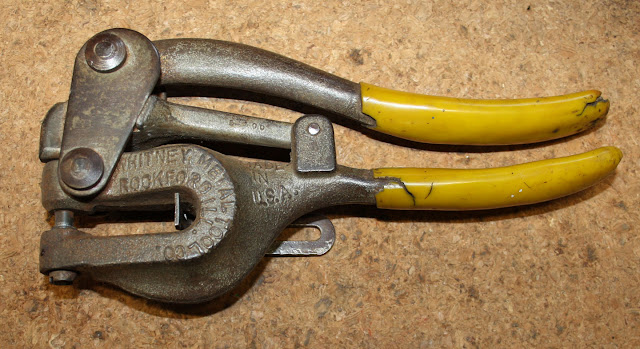 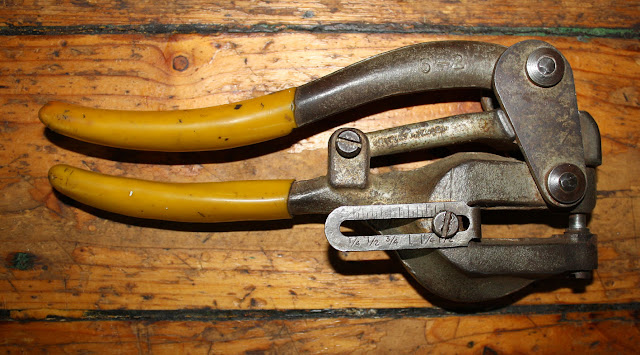 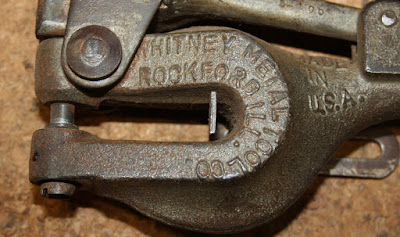 I picked up this metal hand punch years ago.  It does a lovely job of punching very clean holes in sheet metal.  Below, a 60's era catalogue entry for a similar kind of punch.  They used to come available with a series of punches and dies to punch different hole diameters.

William Andrew Whitney, a distant relative of the more famous Eli Whitney, first patented a fold-up wheelbarrow in the mid-1800's. This was followed by a second patent for, of all things, a hand-operated ticket punch.  Going on to patent a lock nut, he founded the American Lock Nut Comany around 1902 in Oregon, Illinois. After patenting a second hand punch in 1906, he moved to Rockford to found the W.A. Whitney Manufacturing Company in 1907.  These were distributed through direct mail.  Whitney lost ownership of the original company, but then founded the Whitney Tool Company.  When Whitney died in at age 82, he had 19 different patents to his name.  His company was acquired in 1925 by the George H. Spengler Company.  As the July 20, 1945, Rockford Morning Star explained, Whitney's punches were used "in nearly every shipyard and aircraft factory in the country. He also had patented several types of shears. His inventions ranged from machinery to a folding baby carriage. Some of his inventions were used in the construction of the Chrysler building and other skyscrapers." 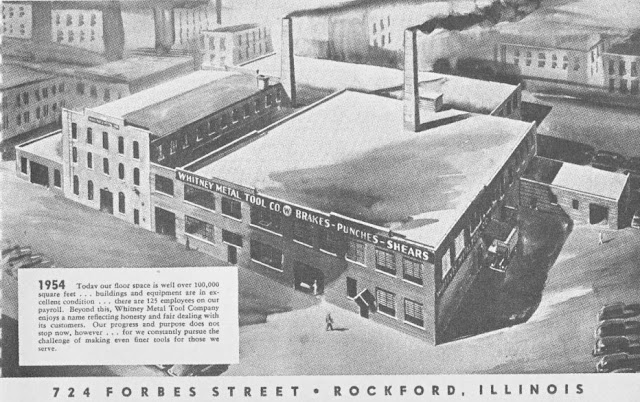 In the 1950's, their products were marked under the Whitney-Jensen name, which continued to be used at least into the 1990's:

The firm was bought in 1961 by Roper Industries and became Roper Whitney, Inc. The company went on to produce a variety of portable metal working tools that could be taken to remote sites like bridges, including a 70-ton Web punch that according to the March 20, 1963, Rockford Morning Star was capable of punching "a 1-inch diameter hole through -inch thick plate of mild steel."   In 1969, the firm was sold to the New York-based Esterline Technologies Corporation.  Whitney became a subsidiary of Esterline, organized under the company's Machine Tool Group.  In the 1970’s the company expanded by purchasing PEXTO, originally Peck, Stow and Wilcox.

The company still exists as Roper Whitney, advertising that its tools are still made in the U.S.A.
Posted by The Duke at 8:59 AM