One of my vices is vises. Prentiss Vices 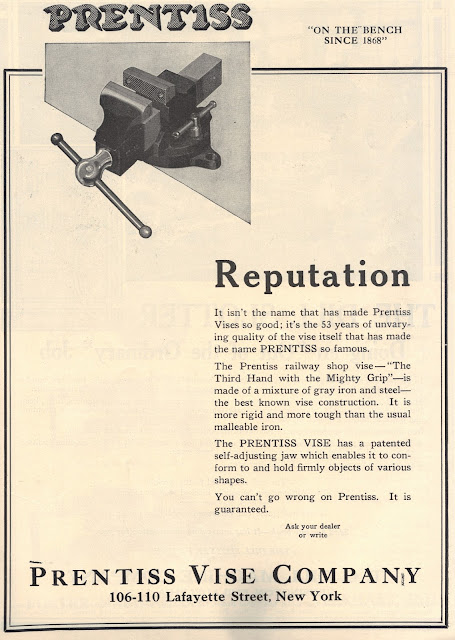 Prentiss Vice was organized by John and Edwin Mulford in Montour Falls, NY in 1877. It appears that they had acquired the Hall Manufacturing Company, who employed a man named Mason Prentiss, who held US Patent 75,576, issued March 17, 1868 for a bench vise.
Although the ad mentions a NYC address, this seems to be only the sales or head office,  Prentiss Vises were manufactured by Bagley & Sewall in Watertown, NY.
As is common with this era of tool manufacturers many companies became intertwined and in 1925 the Prentiss Vise Company completed the purchase of the Henry Cheney Hammer Company.
In 1947 The Prentiss Vise Company, including the Cheney Hammer division, was sold to the Charles Parker Company of Meriden, Connecticut.

The front end of the screw where the handle operates is an elegant piece of work -- 'makes the arrangement on my Record look positively clunky in comparison.

I checked on Kijiji just now, and found not a single Prentiss vise for sale. The vise looks to me like an item well worth keeping an eye out for.