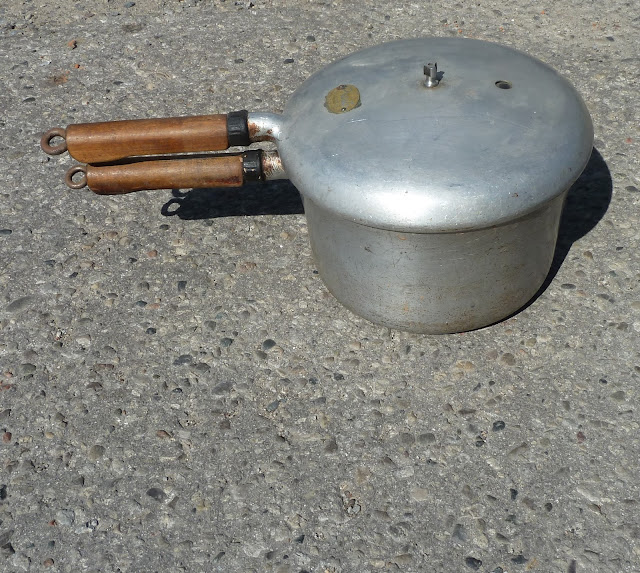 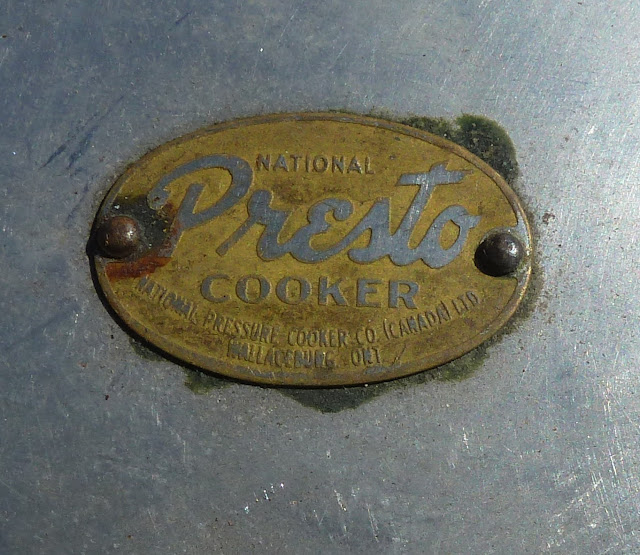 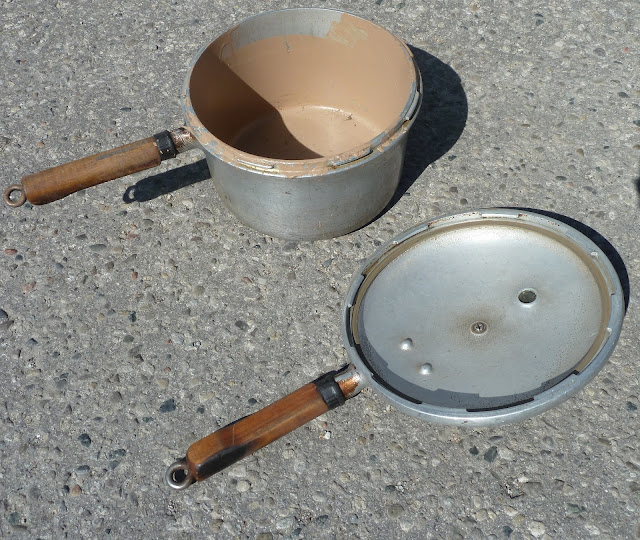 I found this pressure cooker in a shed where it had been reduced to being a receptacle for paint. Seeing that it had been made in Wallaceburg, it became a candidate for a blog post. A little googling led to this entry from the Wallaceburg Museum.


Wallaceburg needs individuals who thought like Arthur St. Clair Gordon. Known as "Bill" he was made from the same mold as his father - David Alexander Gordon who is considered (historically) as the "creator of modern Wallaceburg." Although the three pillar industries (glass, brass and sugar) are now gone, D. A.Gordon helped all three get started and they all enjoyed a good run. His son Arthur was educated in the local school system and then went on to Ridley College in St. Catherines for some "rounding off." He returned to Wallaceburg and married his sweetheart Gretta Hay and set out to better his home town. Like his father, Bill had the knack of being inspired by an idea and carrying it through to completion. His many connections garnered over the years helped to support his many ideas. His knowledge and keen judgment were apparent as his many successes helped to mold Wallaceburg into a vibrant industrially oriented community.
We zero in on one of these inspirations. While visiting a friend, Bill happened to observe a kitchen pressure cooker. For some reason (perhaps he was thinking of mealtime!) the pressure cooker began to invade his mind. He then made some inquiries and discovered the pressure cooker was manufactured in Wisconsin under the name Presto. Why couldn't such an important kitchen cooker be made in Canada? And why not in Wallaceburg? This was all the "mind ammunition" he needed to get the idea rolling!
The above inspiration was once related by Burton Shingles, a friend of Bill Gordon. The observing of a pressure cooker apparently occurred in the United States sometime early in 1944. As the story goes, once Bill Gordon returned to Wallaceburg, he began to plant the idea amongst his friends, hoping it would nurture into reality. At the time, even though the second war was still being waged, the local minds of knowledge were already looking ahead to the post war period. These forward looking individuals knew there would be a post war boom period when soldiers returned to a peace time lifestyle. (And apparently they also had some inside information favouring the Allies to win the second war!)
Before any information was shared publicly, many behind the scenes negotiations were carried out, including manufacturing right employment requirements, building site and all the preliminary needs of any manufacturing enterprise starting from scratch. Once these plans were in place a surprise announcement could be made.
In early September of 1944 it was announced that a 5 acre plot of land had been purchased from Bruce McMillan Sr. an area south of Dufferin Ave. near the railroad tracks. Note, Arnold St. had yet to be put in place at the time. A manufacturing agreement had been struck with the National Pressure Cooker Co. of Eau Claire, Wisconsin to manufacture pressure cookers and other kitchen appliances. It was announced a building 150 ft. by 150 ft. would be built on the property. When in full operation approximately 200 workers would be employed. To coincide with the announcement, Wallaceburg Industrial officials, Chamber of Commerce, municipal and other individuals met with U.S. Eau Claire officials and were entertained at the Washington Hotel in Port Lambton. Jack Hood from Burlington was named superintendent of the new plant. Frio Construction was general contractor with the Sarnia Bridge Co. awarded the steel work contract. Harold Vandelinder, originally from London was named company secretary/treasurer. The municipality did their part by allowing the company 10 years of fixed assessment.
The company went on to play a most important part in solidifying the industrial base of Wallaceburg. Today, many Wallaceburg—made pressure cookers are still in use, a reminder of how inspiration of Bill Gordon took hold, lit a fire in his mind and became reality. Yes, we need the Bill Gordon types today!

I have not been able to find out when the Presto plant in Wallaceburg closed but Presto pressure cookers are still made in Wisconsin and parts and support are easily found on the net. It seems pressure cooker culture is bigger than I thought! http://www.cookingandcanning.net/
Posted by Mister G at 9:58 AM

Many are unaware that in addition to the town’s extensive history with the tool and die/mould making industries, Wallaceburg once had a reputation for producing kitchenware as well. From 1944 to 1959, the Presto plant in the town made aluminium mould castings for pressure cookers and irons. National Pressure Cooker was brought to town by A. St. Clair “Bill” Gordon in late 1944, and by May 1945, production had begun. The business rapidly grew, and at its peak employed 150 people by 1952.

When the plant first opened they produced 10 cookers per day but within a year, they were sending out in excess of 1000 products per day. The company is thought to be the first of its kind in Canada and the new kitchen accessory was an instant hit with housewives all across North America. At the time there were no microwaves, so to be able to cook food in a fraction of the time was very popular. As stated on their 1946 advertisement, the Presto Cooker could cook fried chicken in 15-20 minutes. Carrots just 2 or 3 minutes and there was no need to ‘waste’ precious time in the kitchen. Post WWII brought new and exciting products for households to enjoy and use making life easier.

In a newspaper article written in 1946 in the Windsor Daily Star, the company promised to save up to 300 hours in the kitchen each year with the purchase of a pressure cooker. At that time, the cookers were made with SIM alloy and 85% of the materials used were produced in Canada. Distribution of the cookers was planned globally especially within the British Empire. Presto cookware expanded throughout North America and internationally becoming a household name all over the world.

The firm was later changed to the National Presto Industries until its sale to General Steelware in 1959. At that time, the firm decided to discontinue operations in Wallaceburg.

Thanks for this excellent addition to the information on the post. We're trying to document the history of these once great Canadian industries before its lost. Your help is much appreciated!