Over the weekend, I picked up an old cigar box with a handful of rusty twist and auger bits for $2.  They cleaned up nicely on the wire wheel, and a number of them were from manufacturers I hadn't encountered before.  This is one such.

In 1891, Ellsworth Ford, then of New Haven, Connecticut, was granted a U.S. patent for an improved design of auger bit: 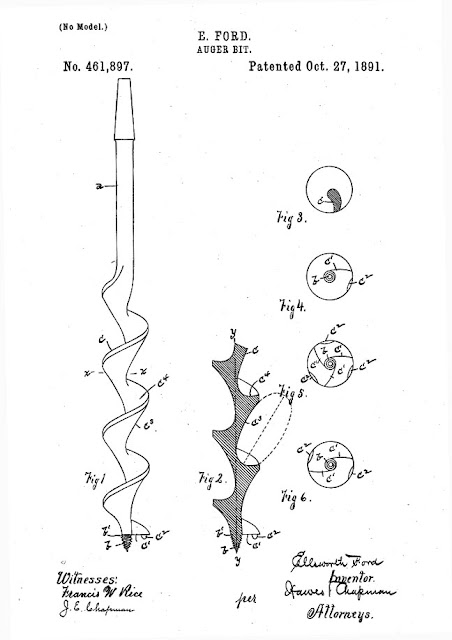 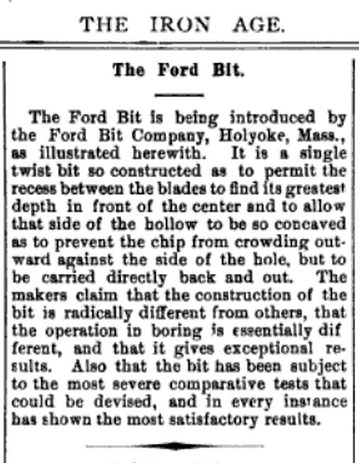 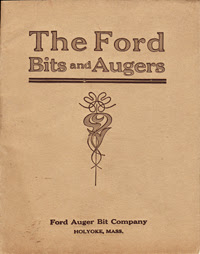 According to Old Tool Heaven:

"In 1916, the Millers Falls Company took advantage of an opportunity to “purchase outright the stock, machinery, good will and any other assets” of the Ford Auger Bit Company of Holyoke, Massachusetts. Although Millers Falls had been selling augers for decades, the purchase marked its first foray into the actual manufacture of the product. Ford Auger Bit had established a solid reputation on the basis of its manufacture of Ellsworth Ford’s 1891 design for an improved, single twist auger bit. The firm’s single twist, single lip models cut aggressively, provided good chip clearance and were favored by many workers for use in basic carpentry. Although single lip bits do not produce the clean, well-defined hole of the double lip varieties, they were marketed as being faster cutting, as operating with less friction and as being especially useful in end grain and green, wet or knotty wood. Since Ford Auger Bit was also making single twist, double lip and solid center bits at the time of its purchase, the Millers Falls Company had no trouble including a full array of augers in its 1917 catalog. Of special interest is the “Hummer bit,” a single lip bit designed for fast work in softwoods. The Hummer was capable of boring through inch-thick pine stock in six rotations—twice as fast as a typical single lip Ford bit and three times as fast as a cabinetmaker’s double lip model.

"In addition to offering four variations on standard-sized carpenter’s bits, the company sold machine bits, car bits and ship augers. Custom orders were also taken. Certainly the most interesting of these was the bit designed to drill through the timbers used in constructing the locks of the Panama Canal. At the time, the Panamanian auger—a monster boring device—was considered to be the longest auger bit in the world. The company continued to manufacture auger bits at its Millers Falls plant until 1946, when the line was sold."