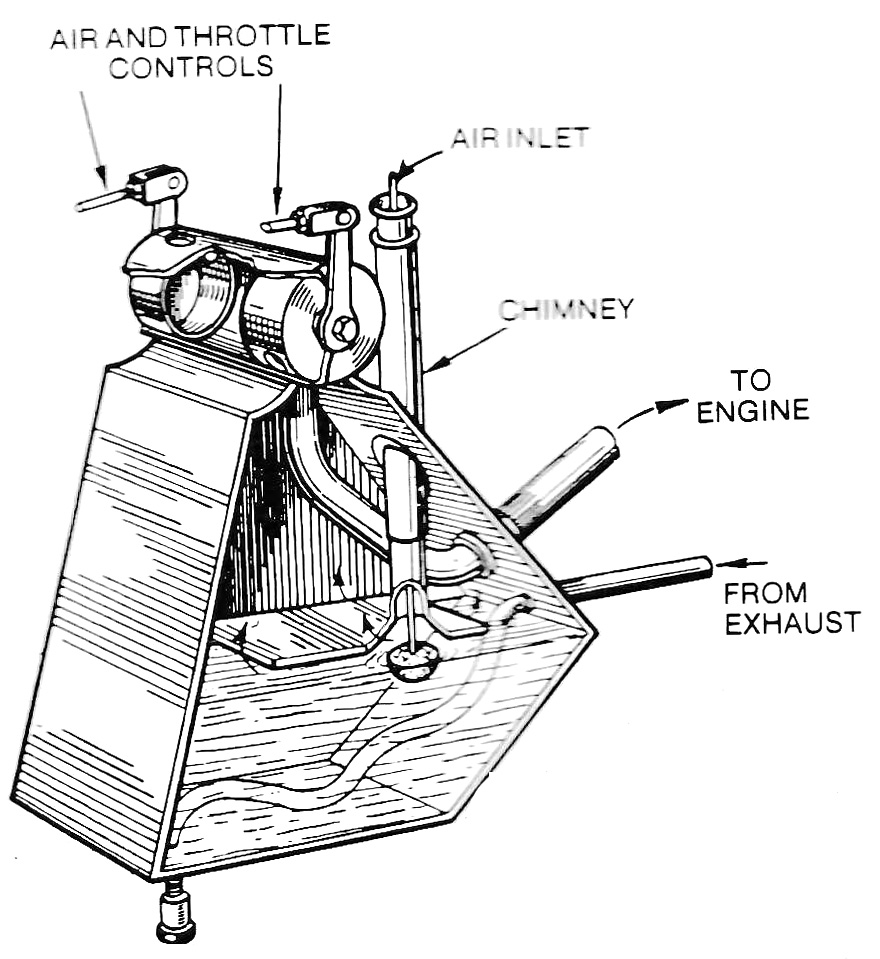 Before Wilhelm Maybach's float and needle-jet carburetor of 1893 entered common usage, this was the carburetor. A sheet metal box half full of gasoline was attached to the intake of the engine. the air was sucked in the air inlet down the chimney across a sheet metal surface. This moving air picked up gasoline vapour, the mixture then continued past the throttle valve and on into the engine. A pipe from the engine exhaust aided evaporation and the rider fiddled with the air and throttle valves trying to keep the engine going. Talk about distracted driving!
Posted by Mister G at 12:01 PM

Trying to make sense of it, doesn't the diagram legend seem wrong ?
I would think "air inlet" is the fuel supply, equipped with a float to match the fuel level to that of the plate.
The cylinder on top then looks like a mixing chamber with air inlet control on the left, and engine manifold control on the right (?).

You may be right as that does look like a float at the bottom of the chimney, though if that was not the air intake what would direct the air to pass down over the surface of the fuel? But I do not see any other provision for keeping the fuel level up. I’ll look further into this.Thanks!

Aaah, I was wrong thinking the tank was a float bowl, it is THE TANK, and the plate can be adjusted up or down. More here:
http://earlymotor.com/leon/misc/html/surface.htm
This is great, keep them coming Mr G !

Thanks! Looks like the drawing I posted is the same De Dion device. That must be a simplified drawing, there is no fuel filler shown and the air inlet doesn't indicate that it can be adjusted for fuel level. Still it must have worked after a fashion. The article mentions that fuel was more volatile then.

I think the Wright brothers first plane had this kind of primitive carb.