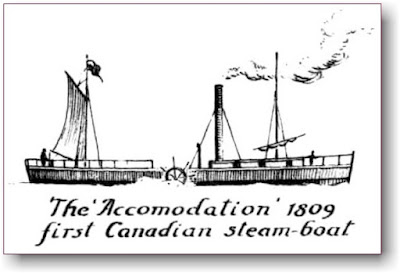 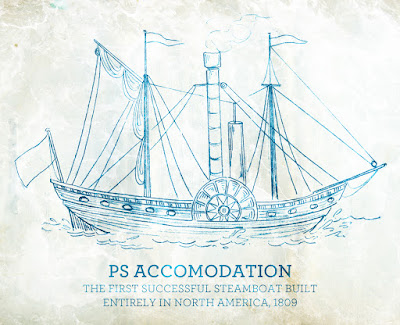 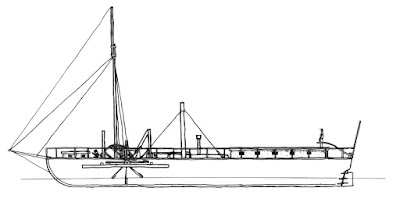 What did it really look like? While researching Canada's first steamboat, I happened across this account written by Stephen Leacock, published in 1948.

In the eye of Montreal's history the momentous event was the coming of steam navigation. Molson's riverside experiments took form. The Accommodation was launched as steam's first bride of the river, clumsy, bulky, but still a bride. She slid into the river sideways, down beside the brewery, in 1809. There are many pictures of[Pg 137] this pioneer steamer, but none, we are told, that can be guaranteed, for photographs, even the fading daguerreotype in the silk case, were still unknown. But there is a picture, with every attempt at truth, in the charming little memorial volume, Old Montreal, a treasure of pictured history published—or may we say "brewed"—by the Molsons when the brewery was 150 years old (1936). We may put with the picture the contemporary account given by the Quebec Gazette of November 9, 1809, of the first trip of the Accommodation down to Quebec.
The Steam-Boat, which was built at Montreal last winter, arrived here on Saturday last, being her first trip. She was 66 hours on the passage, of which she was at anchor 30. So that 36 hours is the time which, in her present state, she takes to come down from Montreal to Quebec (over 160 statute miles). On Sunday last she went up against wind and tide from Brehault's wharf to Lymburner's; but her progress was very slow. It is obvious that her machinery at present has not sufficient force for this river. But there can be no doubt of the possibility of perfectioning it so that it will answer every purpose for which she was intended; and it would be a public loss should the proprietors be discouraged from persevering in their intention.

Stephen Leacock
The Accommodation was underpowered, not a commercial success and was scrapped after only a year of use.
Posted by Mister G at 10:23 PM