I found this photo in a journal of the Royal Architectural Institute of Canada of a house of indeterminate age located near the Byward Market in Ottawa. I liked the details of the house and the analysis (below) that accompanied the photo.
Sadly, its been torn down and doing a Google Maps search for its replacement isn't worth it.
Ottawa Oddity.
The house at 136 Guiges Street is in the tradition of the Lowertown, Ottawa small dwelling: 24 foot frontage, window and·door on the ground floor, window and door to balcony on the second floor, a population explosion going on within. Number 36 is rather special, however, and for reasons other than its discreet use of ornament. It is totally clad in galvanized iron. Pediment, parapet, gazebo, window frames - no part, save the stoop and the sash, exposes any material to the weather except sheet metal. Some of the cladding (the false stone, the quoins) was marketed commercially, but most of it was devised by a resident family of tinsmiths who brought their work home with them. Except for four- find them- ornaments that have fallen off, the exterior is altogether sound. The tin smiths' fancy stands as a monument to their medium, and their triumph over it.
Stanley White, Ottawa


Update 27/02/19.
A fellow blogger, They lived in Gananoque informs me that the facade was actually saved and is on display in Byward Market as an art piece! Story here. 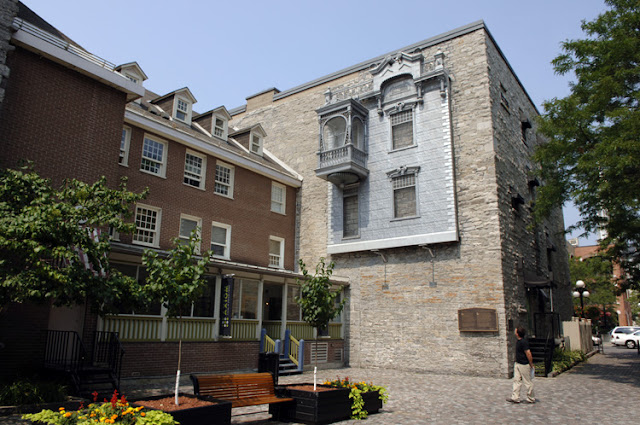 There is the small detail that the actual facade art piece and Malak Karsh's photo are mirror images but we'll leave that as the last bit of mystery.
Posted by Mister G at 10:28 PM