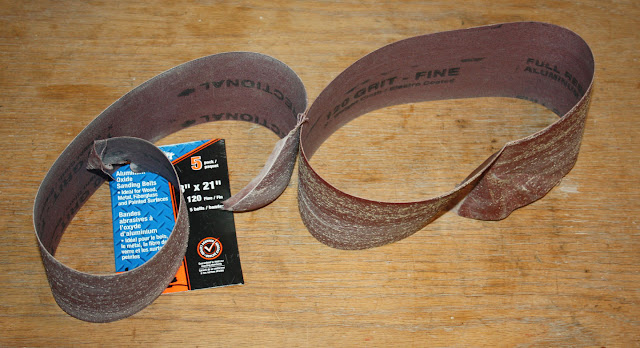 I was in Canadian Tire a while ago and bought a package of five Mastercraft sanding belts for my Craftsman sander.  The initial two were fine.  However, I went to use them recently, and all three broke one after the other at the glue seam after only a minute or so on the sander.  I've never had this happen before. They weren't cheap either.  I looked more closely at the package: "Imported for..." 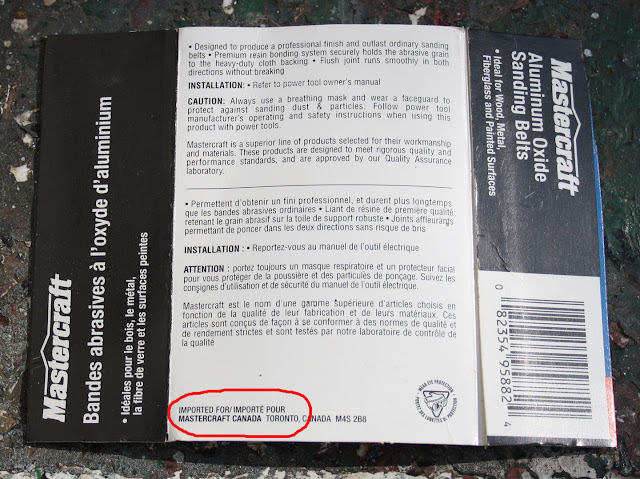 I frequently rail on this blog against cheap products, which are usually made in China.  Of all people, then, I should know better to look at the source of items before buying them.  Someone up the food chain obviously decided they could save a few pennies per belt by using lower quality adhesive. I've since bought some new belts at Lowes, made the U.S.A. No problem with them.

I've marked the Crap Tire package "Junk" and stapled it above where I store my extra belts, just to remind me to never buy from this source again.  "Superior line of my products" my ass. 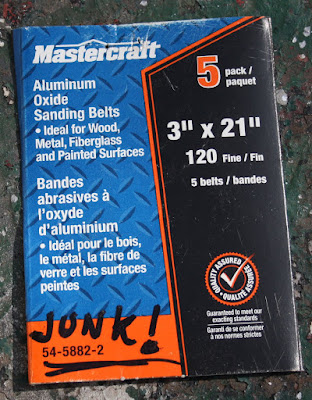 Hi,
In the UK the law is very clear; if an item is not of merchantable quality or fit for purpose the customer is entitled to a replacement or refund. The contract is always with the supplier, who thus can't fob you off with some version of "we just sell the stuff, you'll have to take it up with the makers". Do you not have similar legislation in Canada?
Regards,
Tony

Canadian Tire is pretty good about returns and refunds, but you have to keep your receipts.

The thing I find odd about Canadian Tire's 'Mastercraft' brand is that it's wildly inconsistent. 'Mastercraft' can mean anything from 'worthless trash' to 'excellent value for the money'; you never know which it'll be till you buy it and try it. It's the same with Busy Bee's 'Craftex' brand. Craftex 10" circular saw blades aren't worth the price of the electricity to set them spinning, yet Busy Bee puts the same brand on high-end machinery, and I have a Craftex illuminated magnifier that has served me well for years now.

'Beats me what's going on there.

Thanks for the above comments. Canadian Tire does have a pretty good return policy, provided you have your receipt. I didn't keep the receipt for these sanding belts, so I'm going to skip the potential hassle of having to get a manager who will probably only offer to replace them with more of the same. I'll simply suck it up as the cost of a lesson to be more vigilant when I buy such things in future. My point, however, is once again how much we've permitted quality to decline on such items. Time was, you could just assume they'd be good, unless you were buying them at a dollar store. It used to be said that you get what you pay for. Now you don't even get what you pay for. As someone remarked to me recently, we've gotten really good at making things badly.