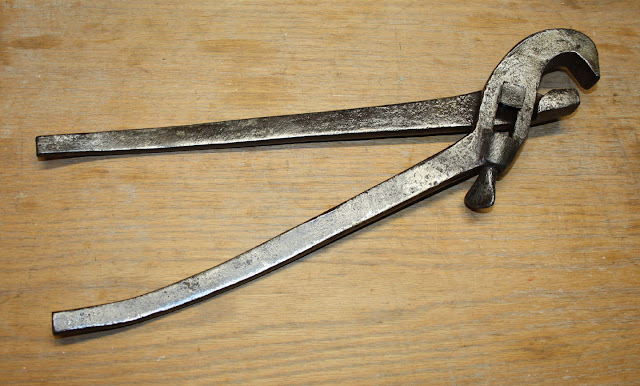 At a local yard sale a couple of weeks ago, I found these unusual pliers.  The seller, who operated a small antique store, insisted that they were blacksmith-made. While certainly crude by manufacturing standards, they were complex enough to make me doubt the seller's word.  I have no doubt that a very talented blacksmith could make such a tool, but it would be truly a labour of love.

My tool had seen hard usage followed by decades of neglect. The adjusting screw for moving the lower jaw was completely frozen, as was the carriage bolt that held the two handles together and acted as a pivot. Not content with leaving well enough alone, I eventually heated the boss around the adjusting screw with my oxy-acetylene torch, getting it very red before attempting to remove the frozen screw. Things seemed to be going my way when the screw simply snapped off, leaving most of the threaded part still well captured in the tool.

So, I used a nut breaker to remove the pivot bolt (which turned out to be heavily distorted anyway).  Then I clamped the one arm of the tool into my Bridgeport mill, and attempted to drill out the broken threaded screw.  It looked like this was going to work until the drill encountered a hardened part of the screw, heated up and melted at its point, work-hardening the broken screw even more. Rats! Fortunately, I had a solid carbide drill which, on low speed and with lots of cooling fluid, managed to chew through the old bolt, albeit at something of an angle.  I was able to break out the rest of the broken bolt, and chase the internal threads with a 7/16-14 tap. I still need to make a new adjuster bolt, using the original flattened head to preserve what's left of the tool's authenticity.

While cleaning up the tool, I did come across the arm and hammer logo below: 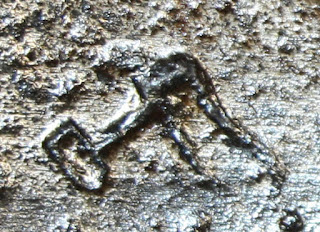 Along with a very worn set of letters:

By dint of careful cleaning and polishing, and the use of layout die, I finally made out the words "Ashcroft Mfg. Co." Below, a better example from the web:

So, not blacksmith-made after all!

Edward Ashcroft was one of the breed of Yankee inventors, hailing from Lynn, Massachusetts.  He started off making parts for steam engines, travelling to London, England for a trade fair in 1851. There he met  Eugene Bourdon, who was demonstrating his new pressure gauge which he had invented two years previously.  This was capable of measuring up to 100,000 psi and resulted in huge decreases in steam engine accidents since its use allowed such high pressures to be monitored. 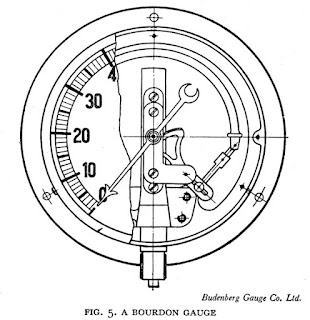 Ashcroft saw its potential and, within the same year, had acquired the rights to manufacture the "Bourdon tube" in the U.S., founding the Aschroft Manufacturing Company in 1851. In America, this invention became known as the "Ashcroft Gauge" and, in many variations, is still in production today. Along with pressure gauges, the company also manufactured sophisticated counters, alarms, indicators, and cruder pipe fitter and machinists tools for steam engines.  In 1880, Ashcroft sold out to partners Manning, Maxwell & Moore, who formed a new company MMM while keeping the Ashcroft name.  In 1885, they moved from Boston and built a brand new factory in Bridgeport, Connecticut.

The company prospered and experienced particularly strong growth in the early 1900's when their star salesman was none other than the infamous Diamond Jim Brady.  This was no small enterprise. Below, letterhead from 1909 and the factory in 1920:

In 1964, the firm was bought by Dresser Industries, then by Haliburton in 1998, which spun it off in 2001.  In 2006 the Japanese company Nagano Keiki bought the firm, naming it Ashcroft Inc., and in 2007 opened a manufacturing facility in Suzhou, China.

The tool I have was referred to as pipe tongs.  These apparently came in several different sizes, numbered from 1 to 5.  Below, from the ebay: 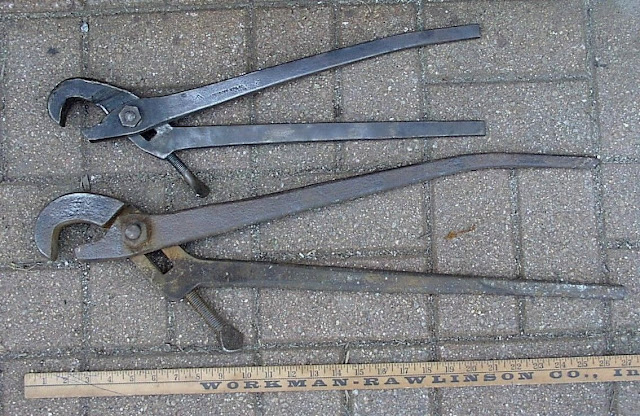 The tools were based on patents by James R. Brown of Cambridge, Massachusetts, who applied himself to improving these tools in a series of patents issued between 1858 and 1876.

Ashcroft's arm and hammer logo is interesting because that firm was clearly using it as early as 1876.  In a variant form, it's better known today as the logo (below right) of the Chicago-based Armstrong Brothers Tool Company, which first used it in 1899.

Armstrong Brothers could not have been unaware of the Ashcroft Company.  Imitation is the sincerest form of flattery.