The person above appears to be using a  Niagara Machine and Tool Works "Superior" Turner.  Below, from the company's 1901 catalogue: 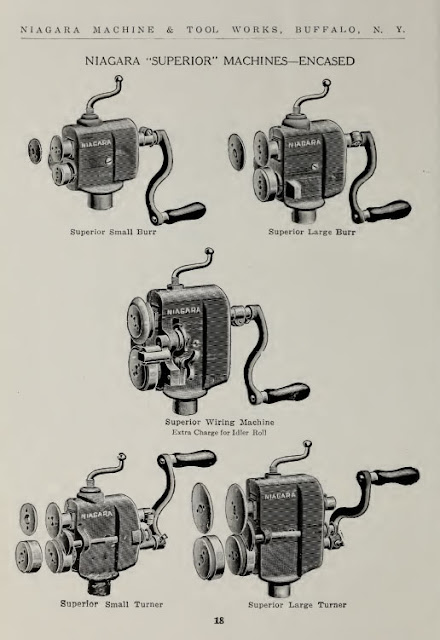 The Niagara Machine and Tool Works was founded in 1879 by George J. Munschauer and Adam E. Heinz in 1879 in Buffalo, New York. It was incorporated in 1901. The company specialized in stamping presses, press brakes and other sheet metal tools needed by the various industries that depended on steel. During WWII, Niagara was a major supplier of metal forming equipment to the Army and Navy air services, as well as other aircraft builders. They supplied such famous firms as General Electric, General Motors and Curtiss-Wright.   After decades of family ownership, the firm was sold in 1992 to the Verson International Group (VIG), which also acquired the  Chicago-based Clearing Machine Corporation, another famous metal-working tool company.   (Ten years earlier, Verson International had acquired the British power-press company Wilkins & Mitchell from the receiver.)

The company then became Clearing-Niagara.  In 1996, Timothy Kelleher, a major stockholder of VIG, led an investment group which bought Niagara and another famous firm, E.W. Bliss of Hastings, Michigan  (which had filed for bankruptcy protection), as well as Parts Plus, a Detroit machinery repair company.

The new company, CNB International, soon ran into financial difficulties as sales declined, and had to start laying off workers from its 400-plus workforce.  It filed for bankruptcy protection in 1999.  In 2001, Bliss Clearing Niagara emerged as new entity owned by CIT Lending Services, Inc. of New York.  In 2006, the business assets and intellectual property were sold to the  Müller Weingarten Group, who then ran the company under the name of BCN Technical Services out of Hastings, Michigan.  That company is now a subsidiary of the German Schuler Group, after Müller Weingarten & Schuler Presses merged in 2007. It makes replacement parts for the legacy companies' machine tools, a far cry from the day when each firm was a huge tool-making powerhouse in its own right.

In 2012, the Andritz Group of Graz, Austria, purchased Schuler AG, which included BCN Technical Services as a subsidiary. Andritz began as an iron foundry established in 1852 by Josef Körösi, a Hungarian entrepreneur.

The former Niagara  factory at 683 Northland Avenue in Buffalo sat vacant for 25 years, but in 2015 was slated to be developed into the Western New York Workforce Development Center, a new hub that will focus primarily on training for careers in the advanced manufacturing and energy sectors.

For a full history focussing on E.W. Bliss, visit Woodchuck Arts. BCN Technical Services also has an interesting history timeline.
Posted by The Duke at 9:17 AM