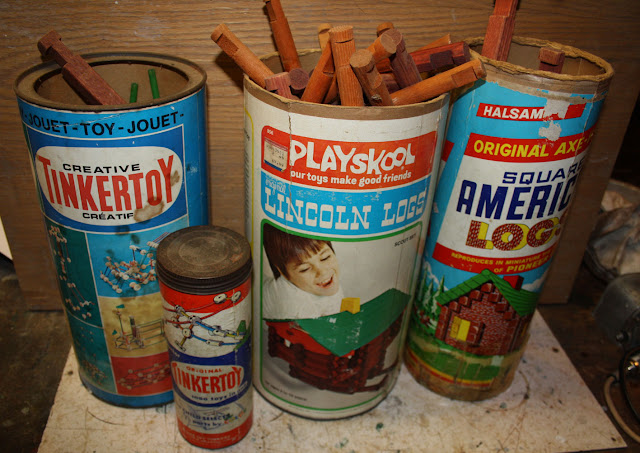 Lincoln Logs were invented by John Lloyd Wright, the son of famous architect Frank Lloyd Wright.  The toys was based on the architecture of the Imperial Hotel in Tokyo, which had been designed by his father.  In 1918, he formed the Red Square Toy Company to market the product, and received U.S. Patent 1,351,086 for a "Toy Cabin Construction" in 1920.  In 1943, the J.L. Wright Company was acquired by Playskool, which was in turn acquired by Milton Bradley in 1968, which was then absorbed by Hasbro in 1984.  Today the toy continues to be manufactured by K'Nex through a 1999 licensing agreement with Hasbro. 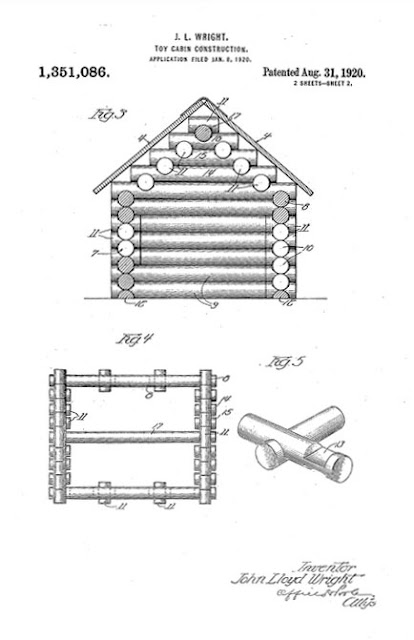 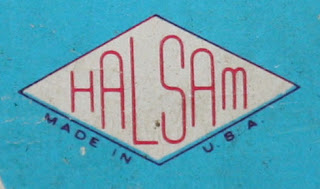 Halsam Products Company, the maker of American Logs, was founded in 1917 by brothers-in-law Harold Elliot and Sam Goss, Jr.  Sam Goss, Sr. had invented the high-speed rotary printing press, and later sold his company to Rockwell.  Sam Jr. bought a woodworking company in Muskegon, Michigan which made wooden blocks.  He relocated the company to a new factory in Chicago that was financed by his father, who also used his engineering expertise to develop an automated machine to make the blocks from raw lumber, with young women assembling the loose blocks into sets.  J.C. Penny approached Halsam to make a knock-off of Lincoln Logs, which were exclusive to their competetitor Mongtomery Wards.  Halsam refused on principle, but went on to develop the square Frontier Logs.  They later became pioneers in plastic toys.   Halsam was acquired by Playskool in 1962, which was itself acquired by Milton Bradley and then Hasbro.  For the full story, see A History of Halsam. 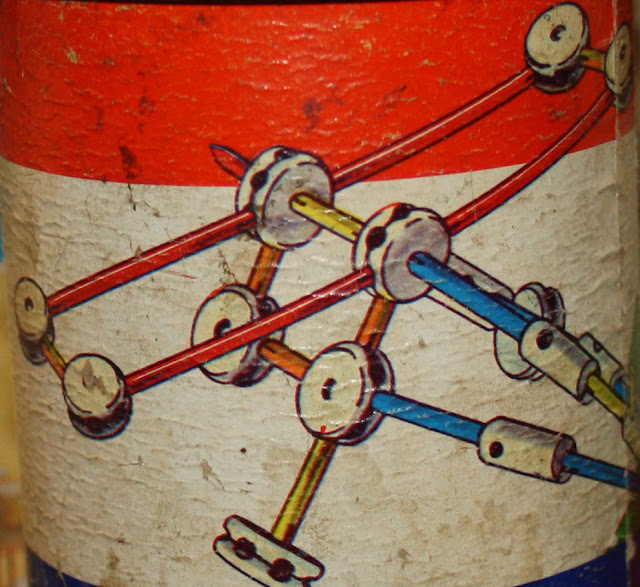 Tinkertoy had its origins in 1914, after a stonemason named Charles H. Pajeau observed children playing with sticks and empty thread spools.  He partnered with Robert Pettit to create a toy, manufacturing it in Evanston, Illinois, and calling their company "The Toy Tinkers."  In 1952, when Pettit had passed away and Pajeau was 77, he sold the rights to A.G. Spalding, Inc.  Irwin Toys of Toronto distributed Tinkertoys (as well as many other American-made toys) in Canada.  (Irwin declared bankruptcy in the early 2000's, and its former Toronto factory is now a condominium called the Toy Factory Lofts.)  Playskool purchased the rights to the toy in 1985.   Tinkertoys were inducted into the National Toy Hall of Fame in 1998.  The company was absorbed by Hasbro (not the best corporate citizen, according to its Wikipedia entry).  In 2012, K'Nex partnered with Hasbro to reintroduce the toy.

We used to do a bit of design work for Irwin Toy in the early 90s. The factory on Hanna was a wreck. Whole floors were empty, windows were broken and the roof leaked profusely, The working areas were huddled in a corner of the first few floors where the leaking seldom got through to.. It was a great place to take off and explore.

One day I was eating lunch in a restaurant in the 'hood I overheard a conversation between a couple of suits about the true value of the Irwin company being the real estate for redevelopment. Well a few years later...

They took the building, removed the top few floors and the old brick boiler rooms, built a whole new taller portion on top of it and the area is now condo/residential. It's right beside the former Inglis plant).

I think I had Lincoln logs, but definitely had TinkerToys, which I loved as a kid. But even better that that, a friend of my father's made me a wooden set of construction toys which were like big wooden 1x4 Meccano components, using 1/4" carriage bolts. I loved it, but unfortunately don't know what ever became of it.