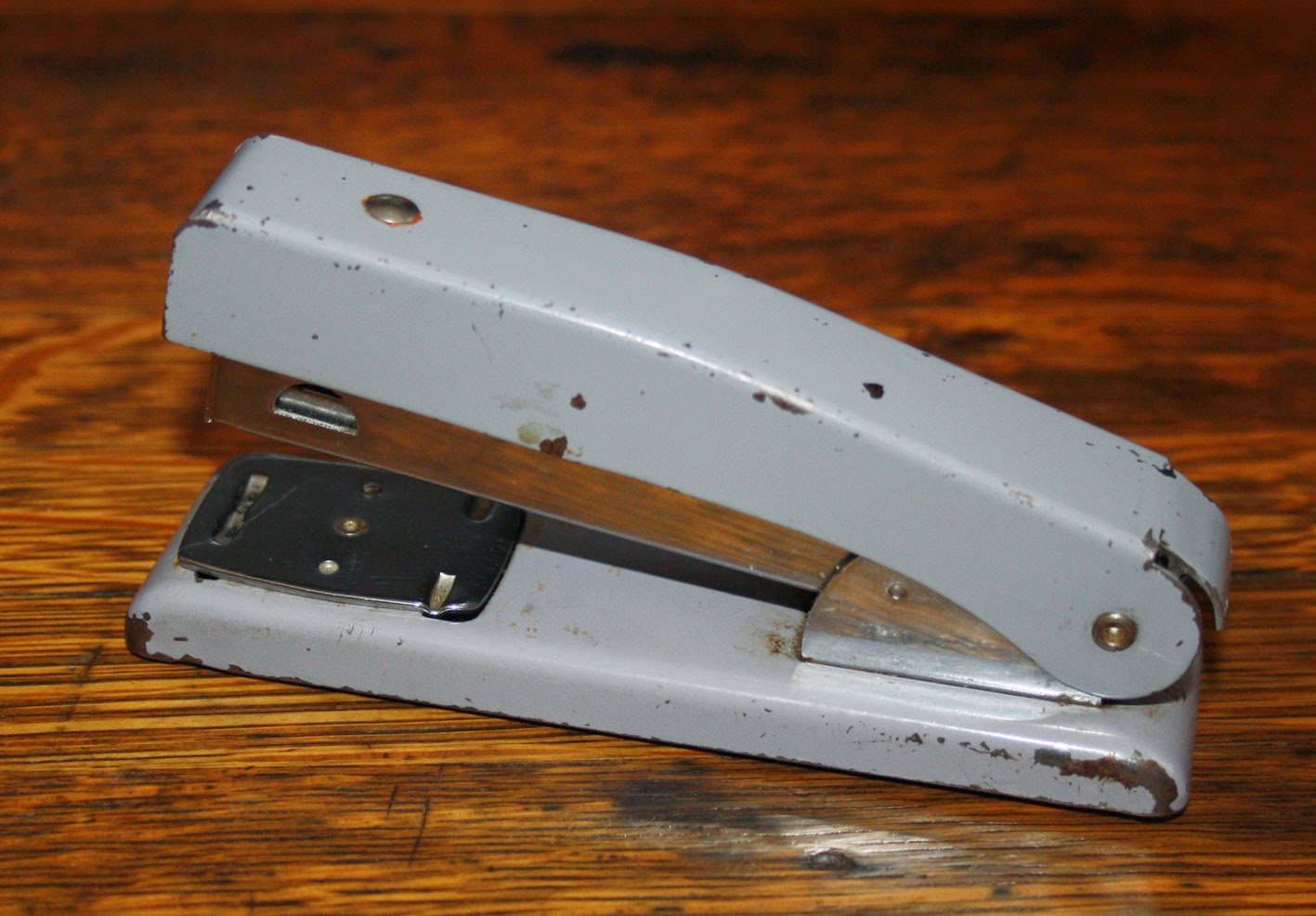 Above, a recent find.  A Rexel "Meteor Mk II."  Who else but the British would call something a "Mk. II"? The steel button on the left in the image above is spring-loaded, so that you can raise and rotate the anvil on the stapler, a nice feature. 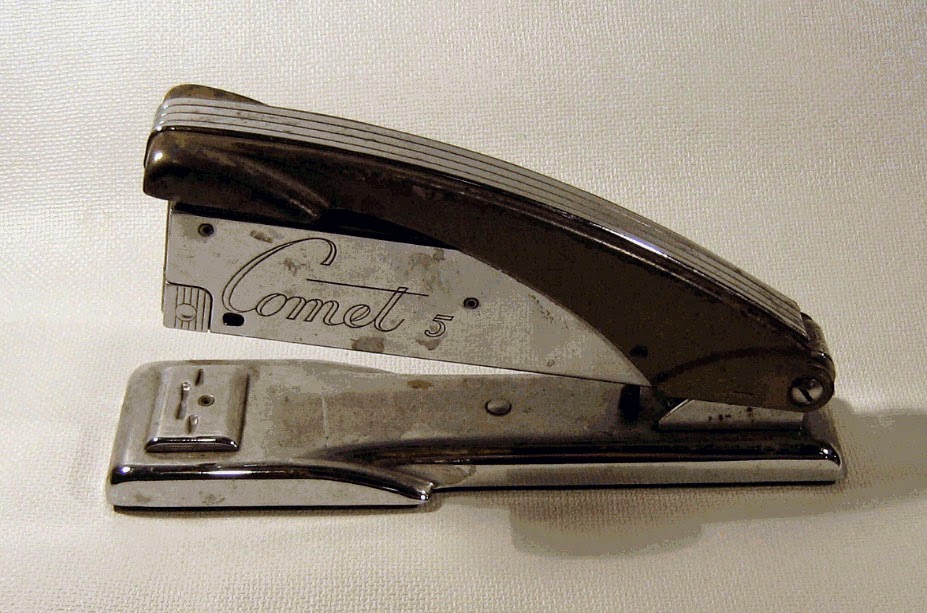 Apparently the company enjoyed naming its products after astronomical entities. Later, they got  more adventurous: 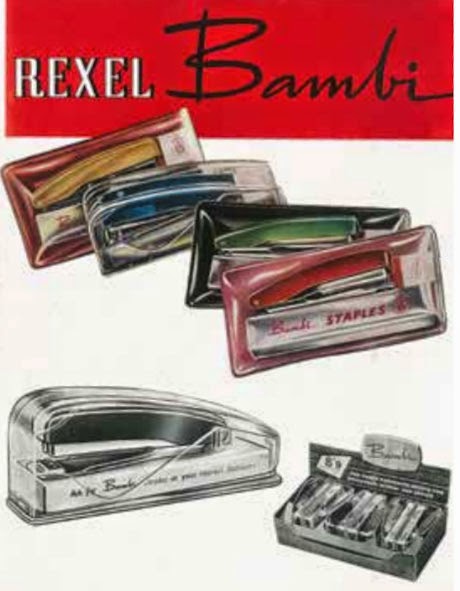 The story begins with a young Czechosolvian named George Drexel.  He began working for a German office supply company in the 1930s, which sent him to London England to start a branch office in 1935. In 1939, he borrowed £100 to found his own company, Rexel (his surname minus the first letter), which eventually grew to employ over 1000 people.  Around the same time, he founded an associated company, Ofrex.  It seems that Ofrex made products for businesses (Office Rexel?), whereas Rexel products were sold through retailers to the individual consumer. Products included typewriter ribbons, such as the Ofrex Superfine container pictured below: 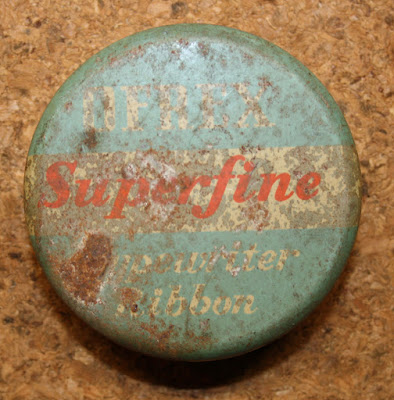 By the 1970's, Ofrex had branched into the production of paper shredders, which found a market in the British Navy.  In the mid-1970's, Ofrex was sold to Gallagher, Ltd., the U.K. subsidiary of American Brands.  (In 1983, American brands was forced to sell the Ace Fastener Company to avoid prosecution under the U.S. anti-trust Clayton Act because of their ownership of both Ofrex and Ace. Still, American Brands also owned Swingline Inc. and the Wilson Jones Company, and the judgement didn't prevent them from buying ACCO in 1987.)

According to the company's present website, in 1992 Rexel merged with ACCO UK to become ACCO Europe.  The Rexel name is still used.  However, another source reports that Ofrex was purchased by Guilbert SA of France in 1992, after which PPR of France bought Guilbert, and then in 2003 sold Guilbert to Office Depot in the U.S. This does not seem to have been a happy marriage.

In a rare example of corporate responsibility, "The George Drexler Foundation was created by George Drexler when the company moved from private ownership to a quoted company. The objects of the Foundation are to assist former employers of the Group who find themselves unable to manage in retirement on their pensions and to provide financial assistance to individuals in full time education." Founded in 1959, it is still doing this good work.

Below, my Ofrex 805 I recently found at a thrift store: 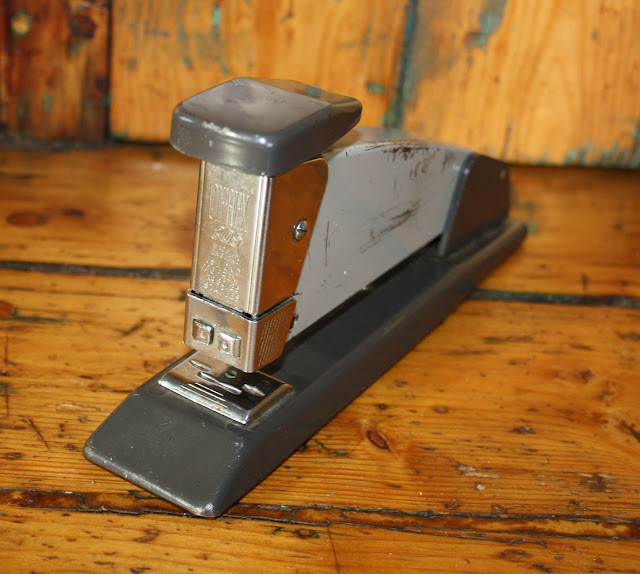 (Many thanks to Delo of The Compulsive-Obsessive Guy blog for instructions on how to open the stapler's magazine!)

Below, photos of Ofrex staplers snagged from the web: 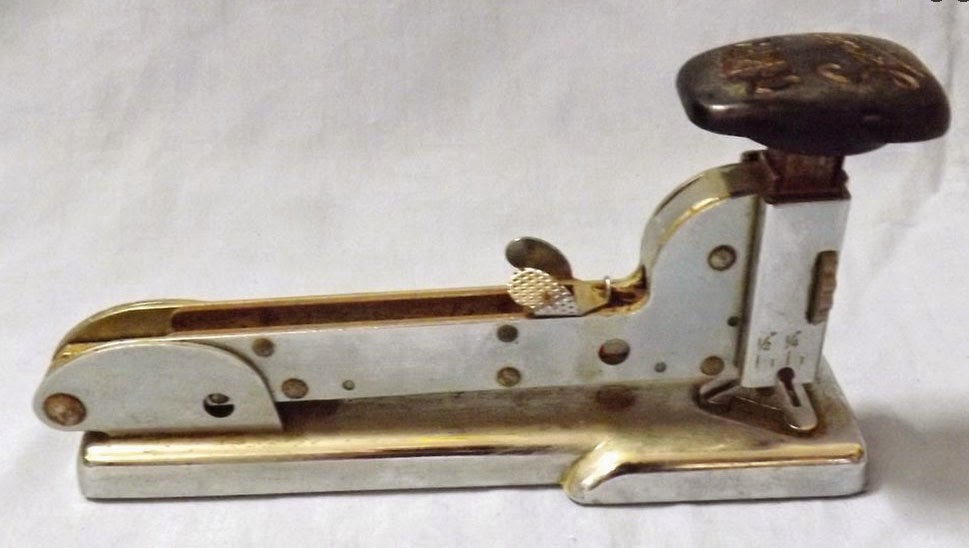 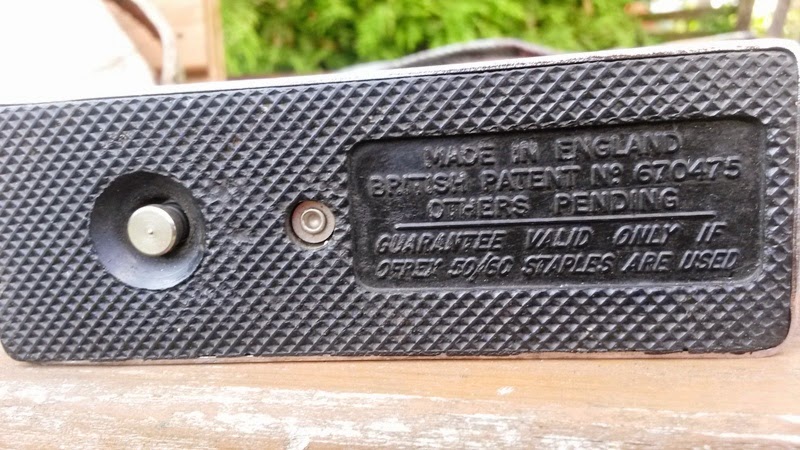 Note the message on the bottom of the stapler above. Apparently, the Ofrex 50/60 staples were of some unusual size (remember, they were British) which is no longer made, and now owners of these vintage machines are reduced to using them as paperweights.

• The first known stapler was made for Louis XV in 18th century France. Each staple carried the royal insignia!
• When George McGill patented the first commercially successful stapler in 1879, it weighed over 2.5 lbs (that’s well over a kilo). In 2014 the Meteor and Matador weigh under 0.5 lb (just over 200 g).

I have a Meteor Mk 2 just like that, but in red. What year was it commercialized?

I think all sorts of old stuff is interesting. I'm not a stapler expert. So, I can't answer your question. Maybe the Compulsive-Obsessive Guy's website could.

I have been checking out a few of your stories and i can state pretty good stuff. I will definitely bookmark your blog http://meteormad.com/