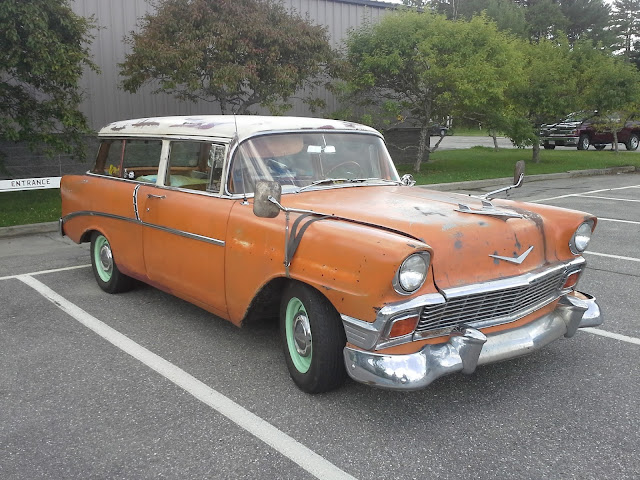 My dad always owned station wagons. They're wonderfully versatile and tractable vehicles. It's a shame that they've all but disappeared from the marketplace.

No, BJ, it's not a Nomad. The Nomad was Chevrolet's top of the line 2 door wagon, with a sloped pillar behind the hardtop door.
The car in this photo (with an upright sedan post B-pillar and C-pillar) is a '56 Chevrolet Two-Ten Handyman 6 passenger station wagon. Chev also offered a more stripped down version called the One-Fifty.
You can see the different models here:
http://56classicchevy.com/1956-chevrolet-station-wagons

But you're absolutely correct on the year, I apologize and have fixed it!

Well there yah go. me going off a fifty year old memory, and somebody who has so much free time that they research a simple internet comment. My compliments to you "Steve' for a totally tactless comment.

With all due respect, BJ, I think you're being a tad hypersensitive.

I didn't find Steve's comment to be at all tactless. Steve was just correcting a minor error and elaborating on the car's lineage. I read no malice in Steve's comment whatsoever.

Peace. This fabulous blog is no place for ill feeling.

didn't you have a teal one of these years ago ?