We used to make things in this country. #273: Pioneer chainsaws, Peterborough, Ontario 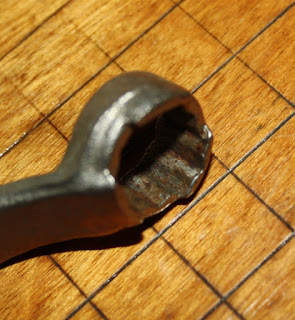 Somewhere along the line I picked up a nice little scrench made by the firm.  Note the special form on the bottom of the wrench, clearly intended for some special purpose, perhaps loosening the clutch.

Pioneer goes back to the founding of the Evinrude Motor Company in 1910.  When Ole Evinrude lost his share to his backer, he waited out the time span of the non-competition clause before staring the ELTO Outboard Motor Company.  In 1926 this became a subsidiary of Briggs & Stratton, and two years later the two companies merged into the Outboard Motors Corporation (OMC).  OMC bought the Johnson Motor Company in 1935.  In 1956, the name became the Outboard Marine Corporation.  That year, the company bought Industrial Engineering Ltd. (IEL) of Burnaby, B.C., Canada's largest chain-saw manufacturer, moving it to Peterborough Ontario and naming it Pioneer Chain Saws Ltd. (perhaps after one of its saws, the "Super Pioneer.") There it joined the Canadian production of Evinrude and Johnson outboard motors as well as Lawn Boy lawn mowers.  In 1977, OMC got out of the chainsaw market, selling the division a year later to former IEL employees who renamed it the Pioneer Chainsaw Corporation.  This only lasted until 1983, when the company was sold to Sweden's Electrolux/Emab which merged it with their Partner division to become Pioneer/Partner in North America. 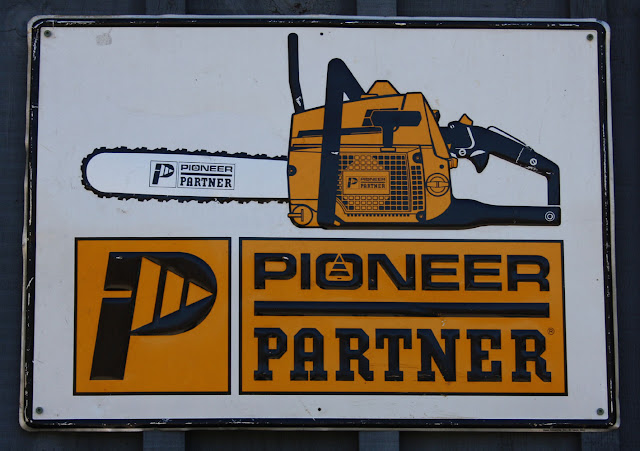 Emab also made Partner chainsaws  at Huron Park, north of London, Ontario.  Only five years later, the Peterborough plant was closed and production moved to Shreveport, Louisiana, the original home of Poulan.  Electrolux had bought Poulan from Emerson Electric in 1984, and Pioneer/Partner saws continued to be sold for a while under the Poulan Pro brand.  (Electrolux also owned Husqvarna and Jonsered, another example of these formerly great companies being condensed under one corporate umbrella.  Husqvarna was spun off in 2006, taking Poulan with it.)

When I first bought my farm back in the late 1980's, I bought a new Pioneer Partner P39 chainsaw.  At 65 cc engine capacity, it weighed in at 8.7 kilograms or 19.2 pounds.  I cut a lot of wood with that saw, but I was younger then and could handle the weight.  Over the years, I picked up some lighter saws, including several McPullahs, Homelites and a nice Husqvarna Rancher.  I discovered that the P39 was not getting too much use:  the weight was simply too much for me now.  So, a year ago I went out and bought a new Echo CS490.  It's somewhat smaller, at 50.2 cc, but hugely lighter:  4.8 kilograms or 10.5 pounds!  That loss of 9 pounds compared to the weight of the P39 makes a big difference.

Interestingly, the manual for my saw describes Pioneer/Partner as a division of Tecfor Inc out of Bensenville, Illinois:

I can't find any information about this company.  Maybe they just managed the warranty side of the saws?

Last year, I decided to sell the P39 and happily it went to a good home--a young farmer who really appreciates the build quality of the old saws. Anyway, below is the cover for the manual.  If anyone's interested, I've uploaded a copy here. 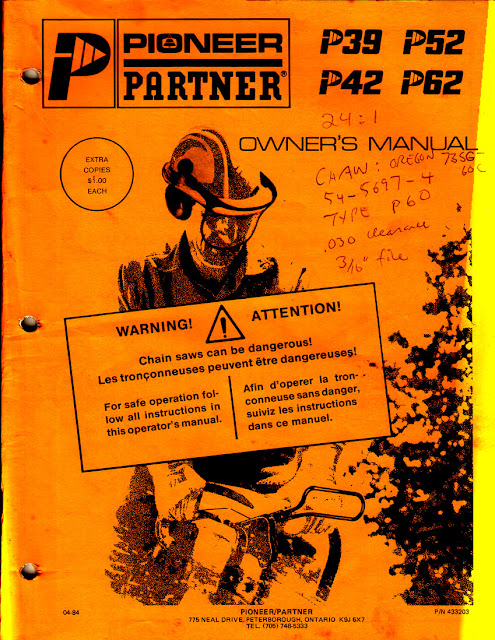 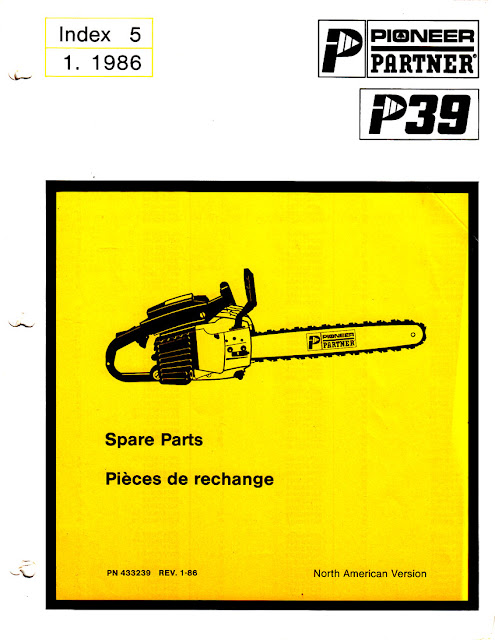 Good information! thank you so much for saying this with great post. chainsaw

I really enjoyed your post on the history of Pioneer Chainsaws. It was very informative and filled in many questions that I previously had. The old saws were so much fun to operate and I really have appreciated their superior torque, power and sound. I would love to acquire a P39 or P42 Pioneer but there are not many quality ones still available these days.I have purchased some old McCulloch 10-10's and 700's the past year and they are outstanding.
Thanks;
Nick