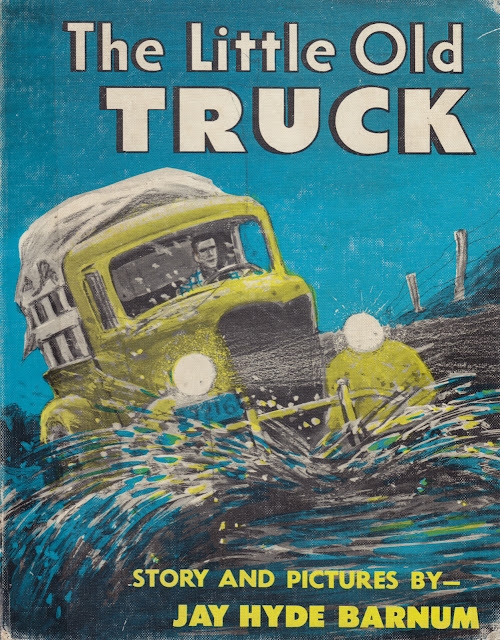 Last week, I stumbled on this book at the back of the ReStore in Brockville, Ontario.  First published in 1953, this Canadian edition came out in 1966.  Below, from the introduction in the book: 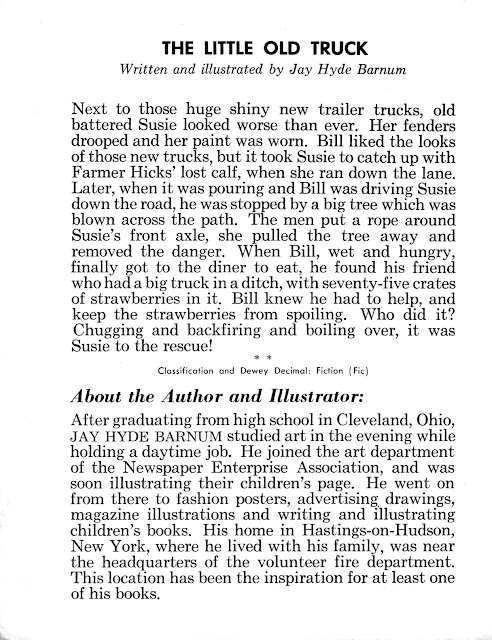 Born in Geneva, Ohio in 1888, Jay Hyde Barnum was a graduate of the Cleveland Art School and the School of the Art Institute in Chicago.  As well as writing and illustrating children's books, he was a commercial illustrator.  His illustrations appeared in such well known magazines such as Life, Colliers, The Saturday Evening Post, Cosmopolitan, and Good Housekeeping.  Among the several children's books he wrote was Motorcycle Dog (1958), which I'm going to have to keep a look out for!  (Some pages from it are posted here.) Mr. Barnum passed away in 1962.

I found "The Little Old Truck" steeped in the same sentiments as the more famous Mike Mulligan and His Steam Shovel, first published by Virginia Lee Burton in 1939.  (It features Mike Mulligan, a steam shovel operator, and his steam shovel Mary Anne, whose name was reputedly taken from the Marion Power Shovel Company.  In 1990, Michael Sporn turned it into an animated short film, which you can view on Youtube.)

Both books emphasize the belief that, if something is well made and subsequently well-maintained, it will continue to perform well even after it has been overtaken by later technology.  Both books also address the affection that often existed between people and their machines.  Maybe contemporary folks have the same feelings for their smart phones?  Anyway, I liked the book so much that I went to the trouble of scanning it into a 20.3 MB pdf and uploading it here. It deserves to be better known and more widely read. I hope you enjoy it!

I'll recommend 'Katy and the Big Snow' also by Virginia Lee Burton. About a red tractor who plows out the town after a huge snowstorm. My favourite book when I was a kid.
I had not thought of that book for 40 years until I had a flashback reading stories to my son a couple years ago. Got a copy from my library, along with Mike Mulligans Steamshovel.