By shear happenstance, I came across a 2012 article on Richard Carter Limited, one of the oldest surviving tool-making firms in Britain. I've never encountered any examples of this tool maker before.


High Burton is about half a mile north of Kirkburton, both being about 4 miles south east of Huddersfield.

Jeremiah Carter founded the Carter Edge Tool Company in Highburton in 1740.  He had 12 children, some of whom followed the same occupation.  (The Carter family was well represented as tool makers.  Pigot's directory of 1834 shows 3 edge toolmakers in Highburton - all Carters – Robert, Henry and John. Robert and John made billhooks and other agricultural implements whilst Henry made clogmakers' knives. Around this time the Carters developed a trademark, the initials IC enclosed in a heart shape, and had it stamped on all their tools.)


With business flourishing, Jeremiah Carter's great, great grandson relocated the company to the Dene Works in Kirkburton north of Sheffield. A small stream passes through Kirkburton, so the works there may have been water powered. The company was to stay here for the next 150 years.

In the 1850s, the family firm of Richard Carter set up a shovel and tool handle business at Dean End. The firm had its origins in the 1740's in blacksmith shops at Highburton, and subsequently at Far Dean, where the usual work of a village smith developed to making agricultural implements and edge tools. Richard died in 1896, but his sons continued and the business remained in the village until 1999, when it outgrew the premises. The firm still trades from its current base in Honley. The Dean Works buildings remain however and still house commercial activity.

At Dean End, Richard Carter's business expanded to supplying mining implements and replacement handles for the Yorkshire coalfield. The construction of the railway line into Kirkburton in 1867 must have been a huge boon to the firm. By the 1880s, imported American hardwoods, as well as local timber, were being used for the production of poles and handles. Shovels were the company's specialty, supported by the Carter Coal Shovel so essential to the massive British coal industry.  Not a great job for the shovellers, mind you:

The shovels also had more prosaic uses. Below, from Kirklees Curiosities:  "This row of 'coil oils' and lavvies are of the kind once frequently to be found behind a row of terraced houses - outside lavatories and a place to store the coal which once fuelled every fireplace. They are fast disappearing but this one still stands proud off Slant Gate, Highburton." 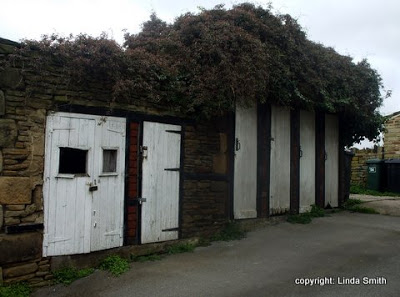 In 1909 "Richard Carter Ltd" was registered as a private company, taking over the business of spade, shovel, tool and handle manufacturers carried out by Messrs R. Carter, A. Carter and W. Carter, all of whom were to be the new company's first directors. These were probably Richard Carter's sons, Arthur and Wilfred, who had followed their father into the business.The Boer War and both World Wars saw a vast increase in the demand for tools. Carter shovels were used to dig the trenches in World War I. Kirkburton railway station was used to send the tools to the troops during both World Wars, 1500 a week in World War II when the company had a direct government contract. Over the following century, the firm continued, surviving a devastating 1957 fire that destroyed the Woodshed and most of the Smith.  A decade or so later, the 1970's decline in the coal and steel industries was difficult for the firm. In 1999, the firm moved 6 miles west to the newer and much larger Nelley Works in Honley. 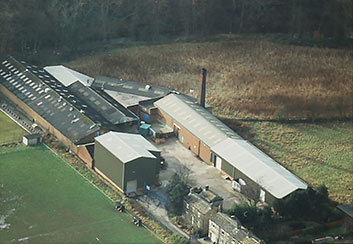 The company has an interesting, albeit too brief, 275th Anniversary history page.  Anyway, how many companies of any sort can boast that kind of longevity?
Posted by The Duke at 10:35 AM

The first picture shows Carter Australia planes and a G clamp from this site http://thevillagewoodworker.blogspot.com.au/2012/09/carter-australia-hand-planes-small.html I doubt they are the same company.

Thanks for this, and sorry for the inaccuracy. I can't seem to find any other images to showcase their wares, since I don't own any myself. I just think it's great that this old, family-owned British firm is still around.

Actually, I've taken down the Carter Australia photo since it doesn't relate to this company. Thanks for pointing it out.

Hi great history one proud firm
Thats what i call made in britain.