The strange story of the CGS Concretia

Kingston, Ontario waterfront in the late seventies. One day there was an old barge tied up to the Lasalle Causeway. Not unusual in itself but my father, who was interested in such things told me it was made of concrete!  I stopped one day and sure enough there it was, a rough old concrete barge that had spent a few decades on the bottom of the river. Over the next few years there was constant work around it, cabins, railings and other wood work, paint, then masts appeared and one day a name. The Onaygorah. Then in 1982, now fully outfitted as a barquentine, it sailed off ( as I heard it back then) destined for adventure in the Caribbean.
I only heard two stories after that, one that the crew had all quit in disgust at the amount of work- the ship lacked power winches to raise the sails and later that because it was so much work to sail it had become a bar in some Caribbean port. I always wondered what happened to it. Apparently other people did also as there are a number of sites referencing the boat and even a book, Captains of Concrete by Sonny Moran.
It appears that no one knows exactly what happened to it. 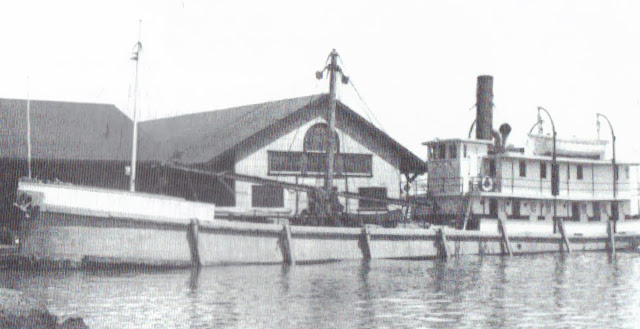 In its previous life the Canadian Government Ship Concretia was a a buoy and lighthouse tender that served in that duty till 1935 when it was sold off to private interests. It had been built as an experiment in Montreal during WW1 when steel and wood were in short supply. Eventually it ended up as a barge in the Kingston area and was sunk in the early sixties.

I may have some information about what happened to Onagorah. I want to confirm, as best I can, the information before relaying it. Based on information I have obtained over the past few years there are a few items that are certain. Onaygorah left Kingston in 1982, I remember attending the Bon Voyage party in Prenyer's Cove, bound for Fiji. She never made it. I will follow up my recent leads and post a follow up once I know more.

Thanks for the input! It's an interesting tale from its original construction onwards!

I am very confident in the information that I have received. The good news with this new information is that I have spoken personally with a person that was present and he recounts the story from the first person, not a story that he heard from someone. So here is what I have learned and believe happened.

Onagarah did in fact make port in Puerto Plata Dominican Republic (“DR”). Exactly when I don’t know. It is safe to assume late in 1982 or 1983. I base this on the fact that Onaygorah left Kingston in 1981, had to break down her rigging for the trip down the Erie Barge Canal. I am guessing refit would have taken a few months.

I did find a picture of Onaygorah on the web showing her under sale and the picture was labeled “Onaygorah under sale in the Atlantic Ocean off Domician Republic” This picture was taken by a Canadian photographer name Dale Sanders out of British Columbia.

In 1985 Onagorah was sold to a French corporation. I confirmed this with Transport Canada. Onagaroh was to be moved from Puerto Plata to Martinique where it was to be used as a floating restaurant.

Enter Captain Joe. Captain Joe was the captain of the vessel that was hired to tow Onaygorah from DR to Martinique.

I spoke via skype with Captain Joe. Captain Joe was towing Onaygorah and using much more fuel than they had budgeted for. They unhooked from Onaygorah to head out to refuel in St. Croix. Onaygorah was left under her own power until Captain Joe returned. Onaygorah broke an oil line in the engine room. A short time later, there was a large explosion and fire.

Captain Joe hooked back up to Onaygorah to continue the tow. Weather picked up and Onaygorah was hit with a tropical wave where she lost her top mast. A second top mast let go and the two pieces crashed through the cabin. Rough waters and taking on water through the holes in the cabin the Captain Joe and his crew fought all day to keep Onaygorah afloat. In the overnight/early morning hours Onaygorah had taken on enough water that she started to sink. At this point Joe remembers Onaygorah sinking quickly. They raced to unhook her so that she would not drag Joe’s ship down with her. Onagorah is presently resting on the floor of the Atlantic Ocean somewhere off the island of Montserrat. Despite information I have read about Onaygorah sinking and taking all hands with her, there was no loss of life in connection with Onaygorah’s sinking.

That is what I have learned. I do feel confident about this information. Much of it coincides with parts of various stories that have come my way in dribs and drabs but always as “I heard”. There have been stories about Onaygorah sinking in the South Pacific, her being seen on a travel magazine cover, government seizures, floating bar, etc. It appears that there were bits of truth mixed in with misinformation.

Thanks for this, probably the final chapter on an unusual ship story. Now another mystery, who is this Captain Joe character? :-)

contact me for more information. I was crew for almost a year after departing
Kingston in 82.

It heards to read that the ONAYGORaH sunk in 1985. I was part of the team from February -June 1982, a young Gernan 18 years old student, and this time at ONAYGORaH influenced me for the rest if y life. What gappened to Oack, oue firmef captain?