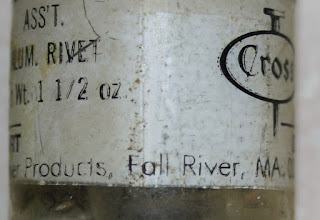 Above, a container of tacks in my shop.  Below, an earlier box pictured somewhere on the web: 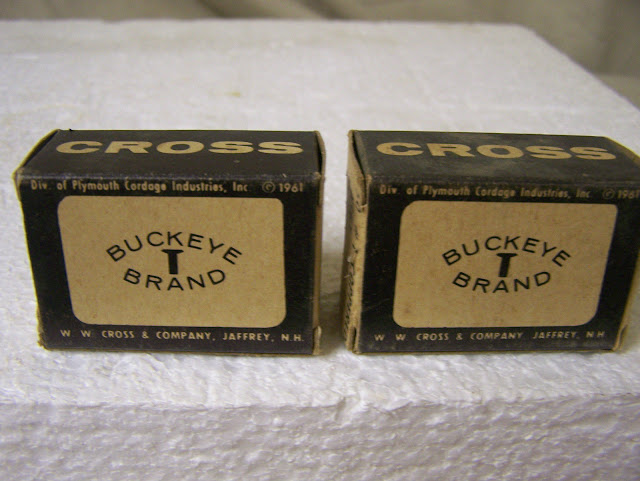 William W. Cross founded his company in Brockton, Massachusetts in 1869, back when the town was still called North Bridgewater.  In addition to his tack factory, Cross was involved in a variety of businesses and civic activities.  As the shoe industry prospered, so did the Cross firm.  In 1900, they began to produce saddle staples for electrical wiring.  The story now moves to Jaffrey, New Hampshire, where the Granite State Tack Company had a new factory built for it by the town in 1916.  In 1920, the United Shoe Machinery Company bought it out.  Twelve years later, it also bought the W.W.Cross firm and moved the entire operation to Jaffrey.  In 1957, USMC was dismantled by the U.S. government in an anti-monopoly action, and W.W. Cross was sold to J.C. Rhodes Co., a shoe-making supply business to the Plymouth Cordage Company of Plymouth, Massachusetts.  The companies were operated as a division of the company known as Plymouth Cordage Industries, or PCI, of Fall River, Massachusetts, and the history of the Cross company now became entwined with it.

The parent company dated back to 1824 and by the late 19th century had become the largest manufacturer of rope and twine in the world.  (In 1904, it opened a plant in Welland, Ontario.)  It went out of business in 1964 and was bought by the Columbian Rope Company the following year. (Parts of the original machinery and 1/3 of the original rope walk building is now on display at Mystic Seaport in Mystic, Connecticut.)  PCI was bought by Emhart, but had been spun off in 1975 when another anti-trust ruling determined that Emhart could not own both PCI and USM Corporation.   In 1982, the restraint was removed and, in a $9 million cash sale, PCI (including Cross) was returned to Emhart by the previous owner, who had also acquired stock in the Chicago Rivet & Machine Company.  Said the previous owner,   "It's more fun to be independent, but this is an age of big companies" and "I guess the general rule for selling a business, when the principals are over-aged and gray is to sell it when it's at the peak of its form." (In addition to Cross, PCI had five other divisions, which included the  J.C. Rhodes Division of New Bedford, Mass., dating back to 1868, making eyelets, blind rivets, and formed metal specialties;  PCI Stamping & Molding Division, Brownville, Maine, the oldest, going back to 1833, making metal stampings, furniture fastener specialties, shoe shanks and plastic injection molded products; Jared Holt Division, Albany, N.Y., going back to 1834, making waxes, wax-based finishes, polishes, etc., and Dominion Tack & Nail Co. Ltd., Cambridge, Ontario, Canada, going back to 1908.)

Today, Cross is located in Canton, Ohio and specializes in electrical staples.  It no longer makes tacks.  It also seriously under-estimates its founding date, giving it as 1932.  I've no idea where they got that number from.

For a full history, read the W.W. Cross Company. That blog also has a page with fascinating photographs about Tackmaking.

Thanks for sharing an Interesting post. Great job!! You have a nice blog. I will be back a lot Good luck with all you do!

Rivet manufacturers and suppliers in Mumbai