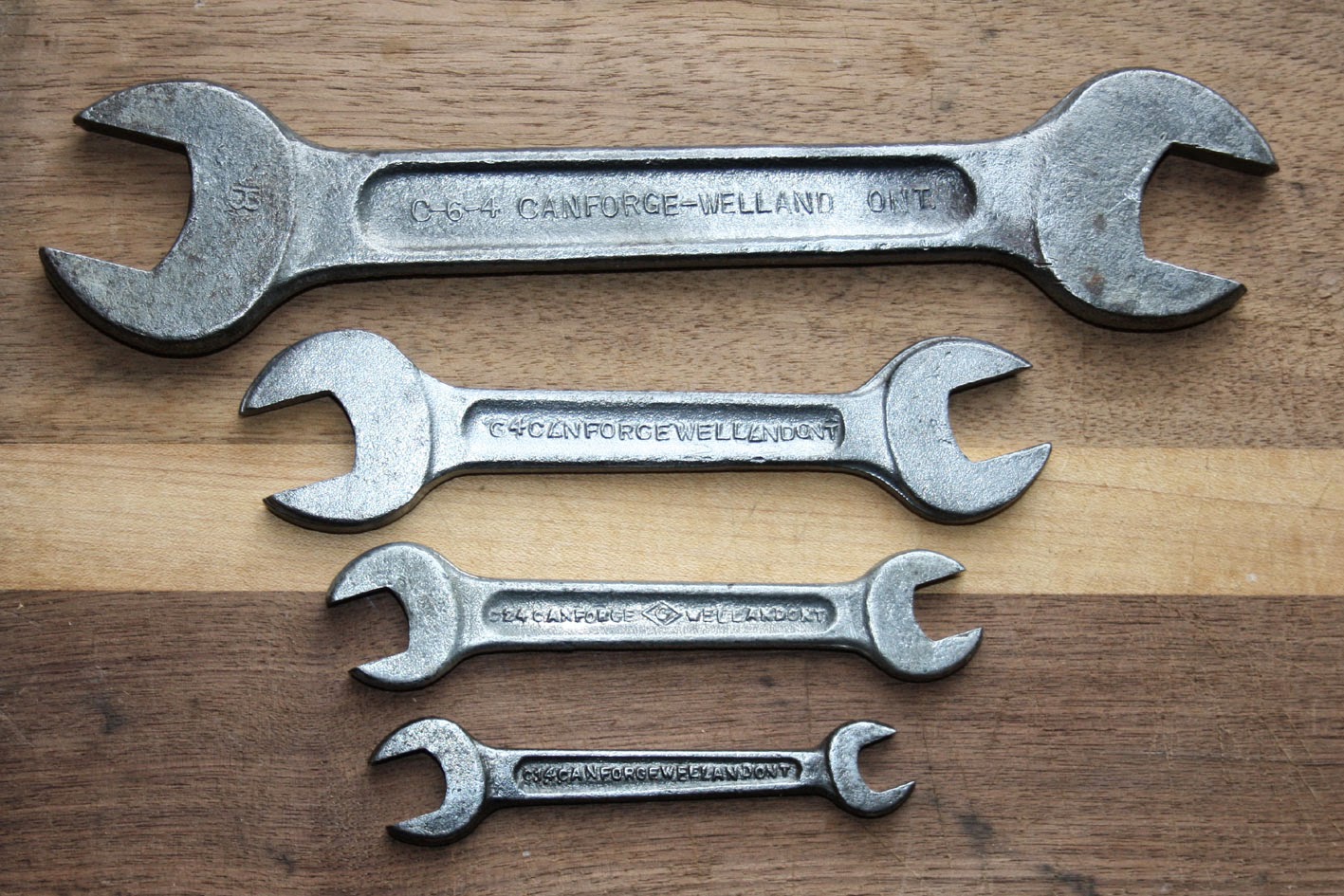 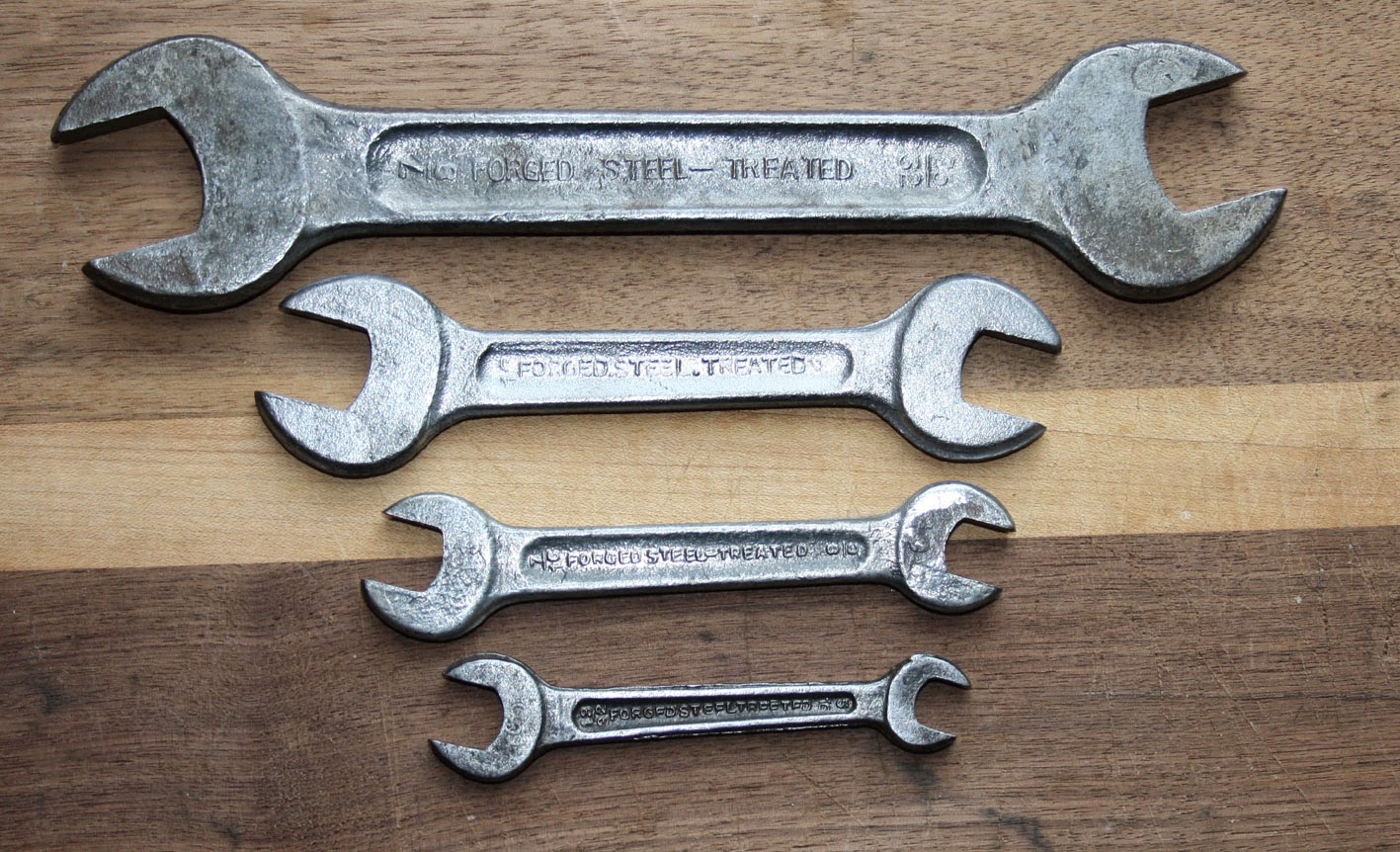 Canforge wrenches like those above are very rare in my neck of the woods, and these are the only four SAE ones I have ever encountered. Curiously, I've never turned up a duplicate.  The wrenches are stamped "Forged Steel--Treated" and the ones in my collection include several whose openings are measured in 32nds of an inch.  How long has it been since anyone has produced wrenches in these size.  Also, if you look closely at the wrench second from the top, you'll notice it has no fractional size markings whatsoever, suggesting it was either supplied with a particular machine, or it dates back to the time before manufacturers put such markings on their wrenches.  I don't know if the "Canadian Forge" wrench below was made by the same company as Canada Forge but, if so, they did make metric wrenches as well: 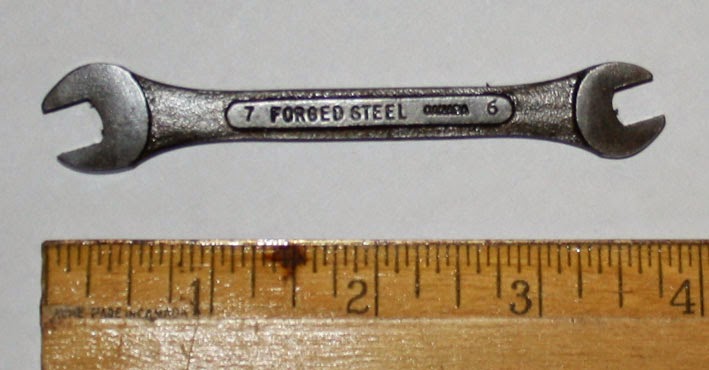 Canforge tended to focus on much larger forgings, and so perhaps the scarcity of such wrenches is because they ultimately left wrench manufacturing to other companies prepared to specialize in this area.

The Canada Forge Company Ltd was founded in Welland in 1906.  In 1912, it was amalgamated with the Canadian Billings & Spencer Company of the same city, and with the James Smart company of Brockville, Ontario, becoming Canada Foundries & Forgings.  During World War I, in addition to munitions, the company produced 100,000 of the infamous Ross rifles.  By 1919, the company employed 1000 men, making it the largest employer in Welland.  In 1977, it was renamed Canada Forgings, a division of Toromont Manufacturing of Toronto.  It is still going strong, and counts among its customers such giants as Pratt & Whitney, General Dynamics, General Electric, Siemens Westinghouse, Atomic Energy, BF Goodrich and Rolls-Royce.

For early pictures of the company's premises and activities, visit the Welland Public Library site.
Posted by The Duke at 10:37 AM