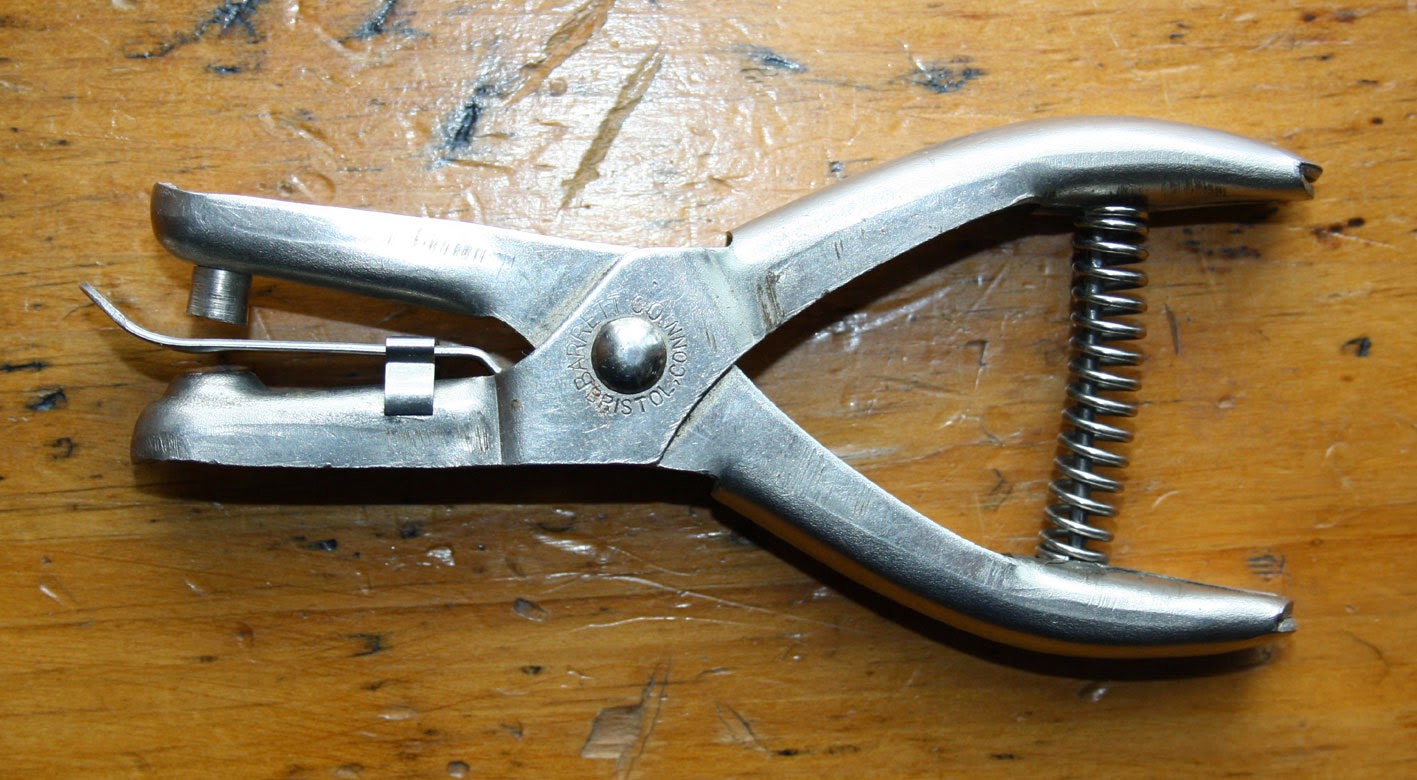 There's not much information available about the Barrett Company of Bristol, Connecticut.  All I can find is that Donald W. Barrett was the third generation owner and president before retiring in 1993, and passing away in 2002.  The company is gone now. 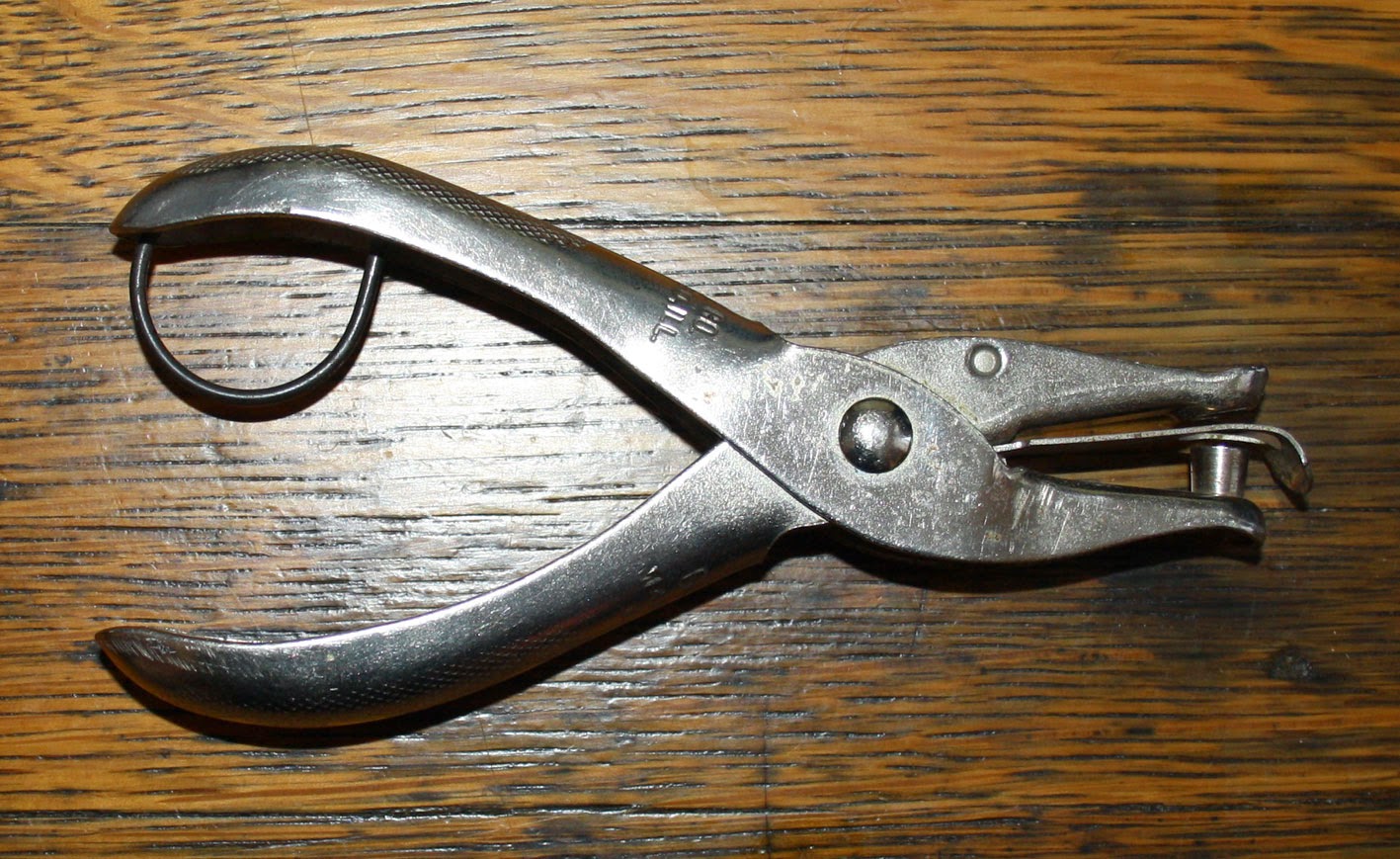 The "Gem" punch above was made by the McGill Metal Products Company of Marengo, Illinois.  The McGill Ticket Punch Company of Chicago was in business beginning in the late 1800's. In 1910, the company was incorporated as the McGill Metal Products Company. In the early 1920's, George F. McGill, the founder's son, was head of the company.  On a business trip by train, he got talking to the mayor of Marango,Illinois, who enticed him to build the company's new factory in that city. In 1932, the company rocketed to success, literally with a better mousetrap. The original "Little Nipper" mousetrap was invented in Britain in 1897 by James Henry Atkinson.  Among the many who tried to improve on it were two brothers, Herbert and William Stilson.  In the early decades of the 20th century they patented several "self-set" mousetraps and manufactured them at the Stilson Specialty Company in Dubuque, Iowa. 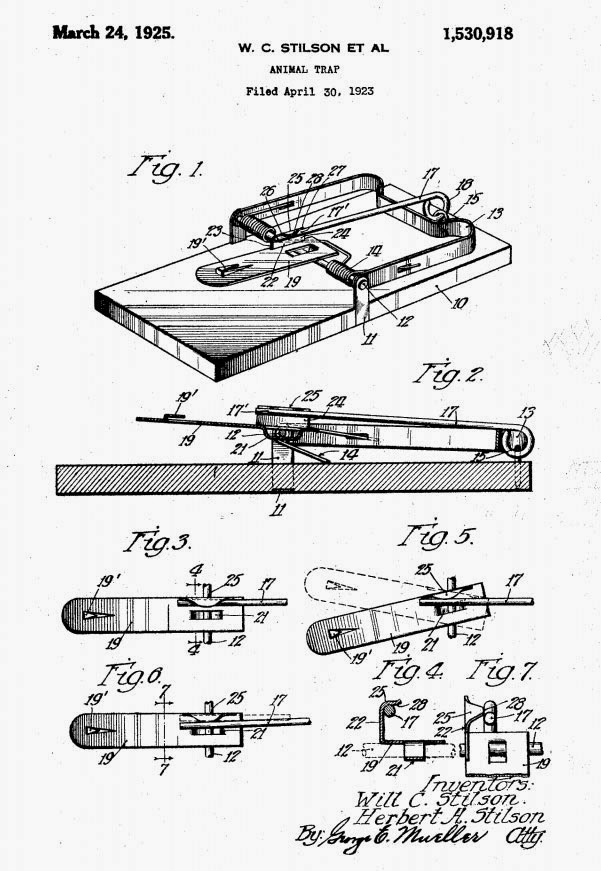 Eventually, they assigned a number of these patents to the McGill firm.  The company actually copyrighted the phrase, "The Better Mousetrap," and even had a mousetrap proving ground located in an old cow auction barn.  (There is actually a privately-operated Trap History Museum in Galloway, Ohio with displays of over 4000 animal traps!) George McGill passed away in 1942, and ownership of his company was purchased by two employees who continued to make the mousetraps and the paper punches, improving on them as shown in the patent number stamped on my own punch: 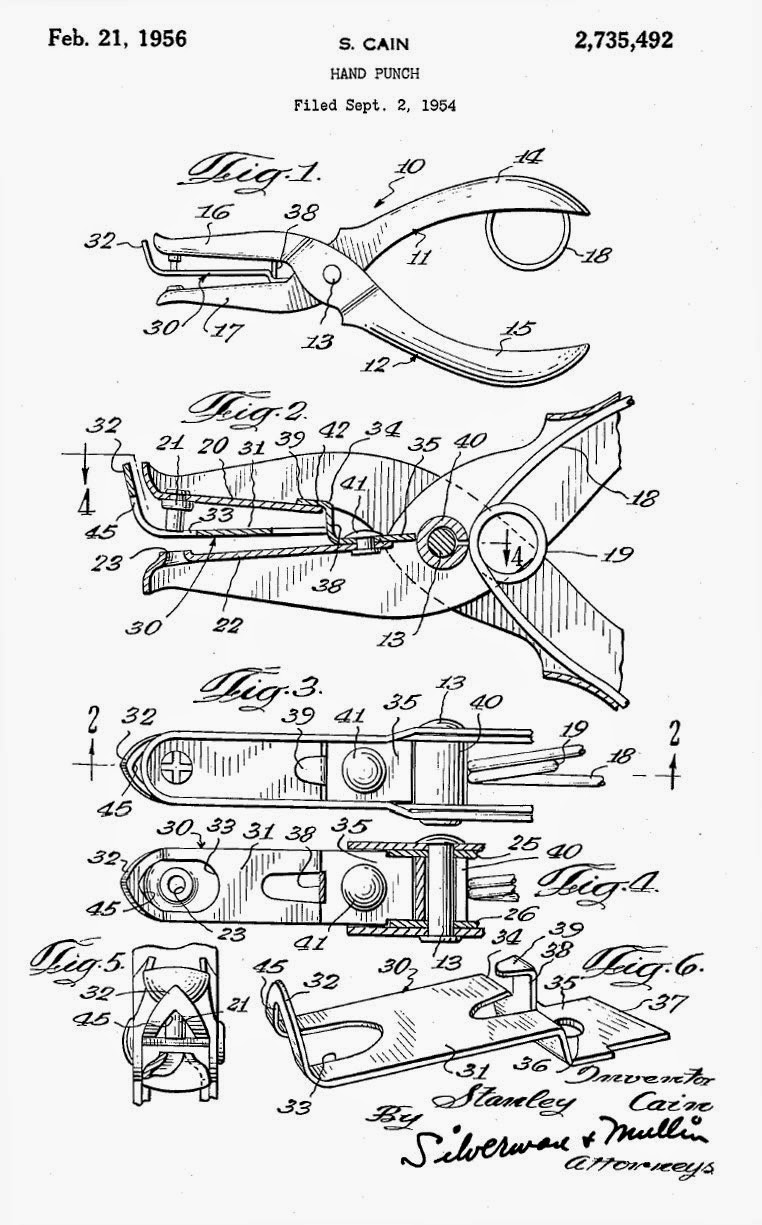 By 1968, they were producing about 14,000 punches daily and selling nearly 2 million of them each year.  That same year, they introduced punches for data processing systems, including one used in the a missile program at Cape Kennedy.  The company did no out-sourcing and by 1971 employed 125 people.  In 1986, the owners were approaching their 80's and sold the company to two businessmen who promised to keep the product lines.  In fact, they immediately sold the mousetrap line to the Ekco Group, McGill's biggest competitor, and closed down that production line.  The McGill line of punches has since become part of the Advantus Corporation, and the name applied to scrap-book stamping equipment.  In 2013, the property, equipment and memorabilia of the former McGill firm were sold off, and the factory building was bought by the Marengo United Methodist Church which hopes to stave off the downtown decline by using it as a daycare or community use centre. 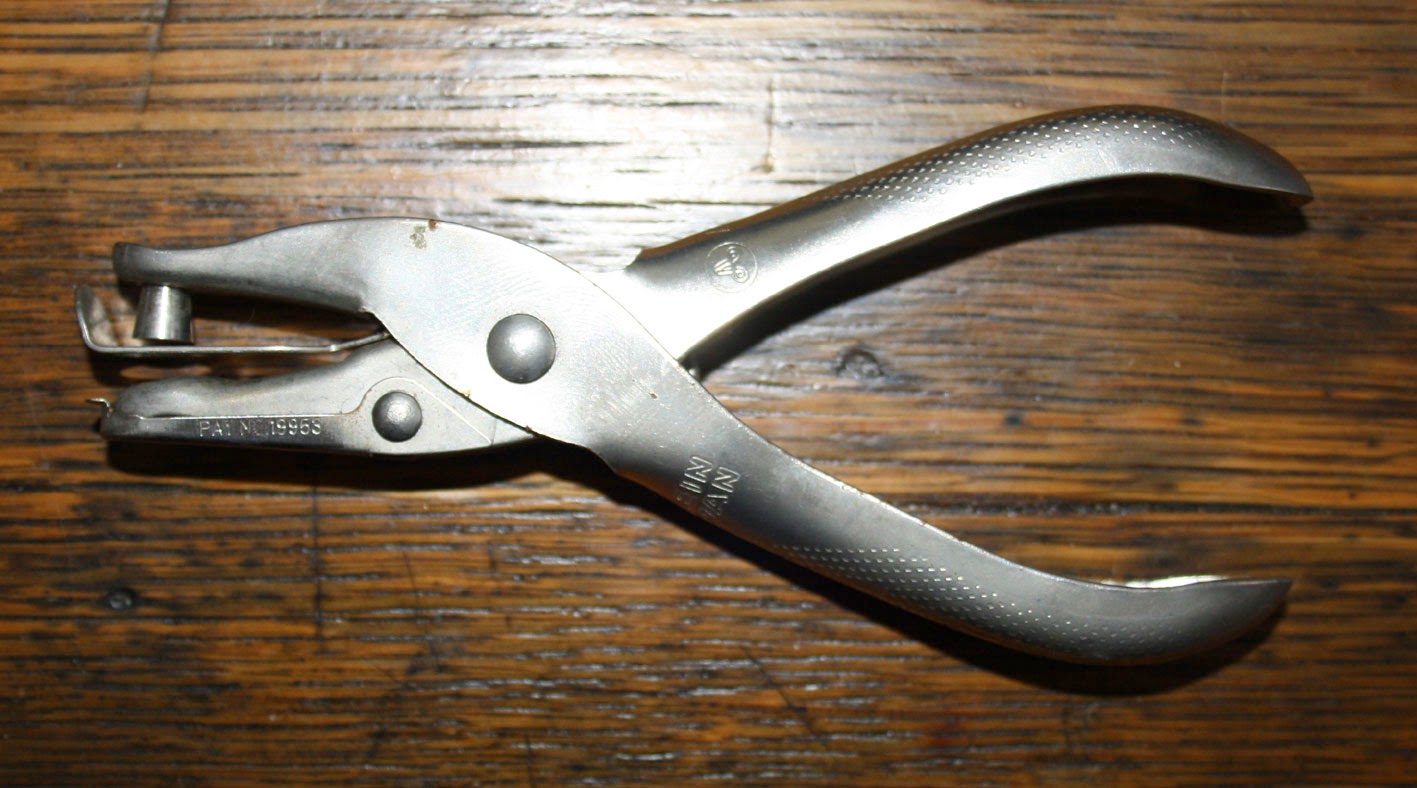 Above, a punch made by ACME.  It features a nice spring-loaded trap door to collect the chad.  This is stamped "Pat No. 19953" which doesn't correspond with anything I can find.  While ACME started out as a Canadian firm, it was bought by a U.S. company at, at the time that this punch was made, it was being produced in Taiwan. 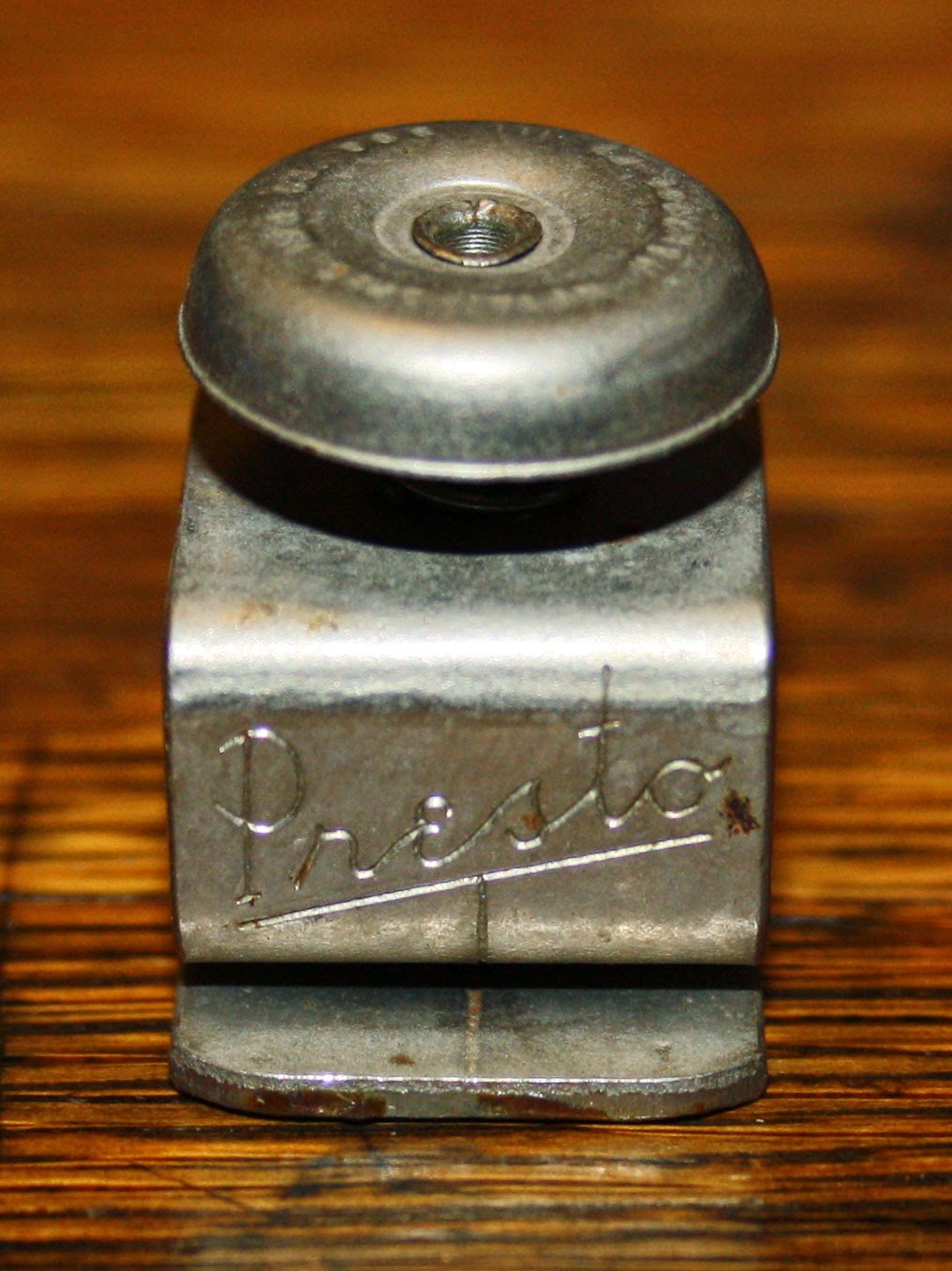 My "Presto" hole punch was made by the Metal Specialty Manufacturing Company of Chicago, Illinois.  Incorporated in 1905, its first products were harness hardware for the horse and buggy era.  Specifically, they made buggy whip holders. Fortunately, they apparently didn't see a future in this, and went on to make products like paint spray guns, vacuum cleaners and automobile parts.  It's claimed that they were also the first to make a dash-mounted cigar lighter, electric engine heaters, headlamps, taillights, and other car parts and accessories.  In the 1930's they made the "Speed-o-Bike", a kid's bicycle replica of a motorcycle. Other products included roller skates, frying pans and food dehydrators.  In 1933, the firm was bought by Loren H. Semler, Sr. and it was he who introduced the small staplers under the "Presto" name.  These products saved the company financially, and it went on to amalgamate with another company to become the Loren Specialty Manufacturing Company.  During the Second World War, the company's production changed to recoil mechanisms for 50-caliber machine guns, nose cones for artillery shells, booby traps and Navy distress signals.  Following the war, production returned to the Presto products, including staplers, staple removers and card files.  They also made a very neat postal scale. The Presto line was sold in 1962 when the company took a different direction. It merged with two other companies to become Semler Industries in 1971.  (Two years later, the company designed and sold the first Potable Water Cabinets to United Airlines. I don't know what passengers did before this!)

Today, most of these punches are made off-shore.  Below, from left to right:  China, Taiwan, Japan. Like the ACME above, the Taiwanese one has a compartment with a hinged steel lid for holding the chad. The Chinese punch has the same feature, but with a cheap plastic lid that won't stay closed.  Progress is fine... 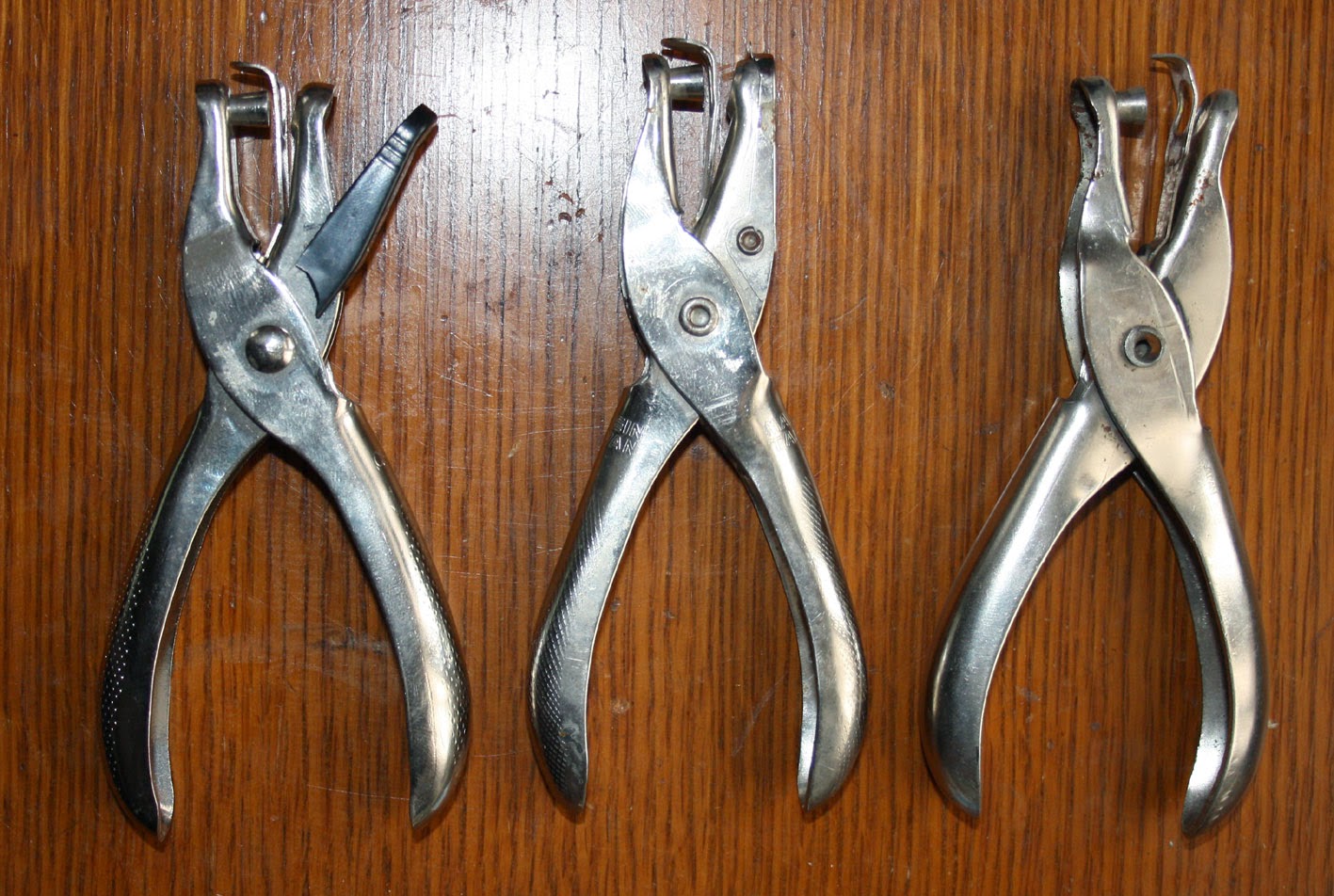 Thank you for posting this history! I have my grandfather's GEM hand punch and use it to this day (I have a newer one made overseas but it doesn't work as well). It matches the one in this post - how cool to own a little slice of history! It may seem silly but I think of my grandfather every time I use it.

Love it! Your grandfather is probably smiling down at you.

I have one of these paper punches that used to belong to my parents and I've used it ever since I inherited it (read: took it with me when I left home). I just tried to use it and found that the punch somehow got broken (not by me, but one of my family, I guess) and now is unusable. Started looking for where I can find a replacement, and now realize, sadly, that I'll find a single-hole paper punch somewhere but it's not going to be a replacement for this McGill "Paper King". It has a spring between the handles and a slide to adjust for single page to multiple pages at a time. The little chad compartment held a lot, too, before it had to be emptied. It has lasted probably at least a half century (I'm 65 and my parents had this as long as I can remember back). I guarantee you, the way things are made now compared to the way things were made to last back then, I'll probably outlive my next single-hole puncher, too, and maybe a few after that.

Judging by eb ay prices, not much. They're interesting, they're not valuable...