Nortons in Music: Kamikaze by The Boys 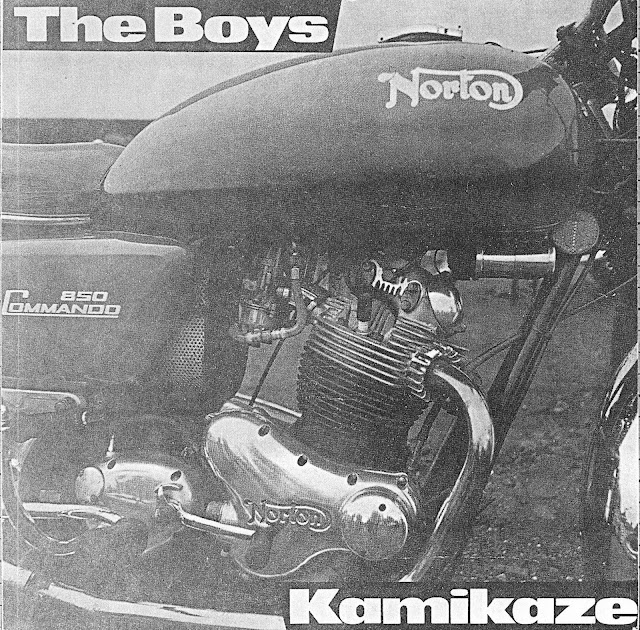 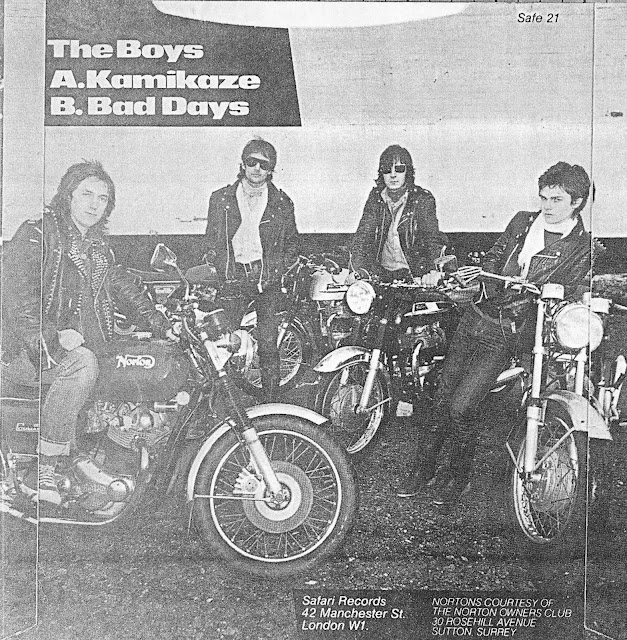 Decades ago, a friend of mine was flipping through records at a record store (remember record stores) when he stumbled across the '45 above (remember 45s?)  He looked at but didn't recognize the band, put it back and continued flipping when he thought. "When's the last time you ever saw a record cover with pictures of Nortons?"  (Although there is one with Mama Cass!)  So, he paid the paltry price, and later added the Norton song to an audiotaped (remember audiotapes?) compilation of road tunes he was making for his own friends.  He sent me one of these tapes, along with a photocopy of the record cover, which recently turned up.

Here are the lyrics:

It was a Friday, the rain was pissing down
I took my Norton and I rode into town
There was this young kid, all dressed in black
Riding his Honda and looking real slack

He tried to take us on the edge of town
Didn`t see the school bus that could have mowed him down
He swerved to miss it, I swerved to miss him
As I came off my bike, I saw him grin

I caught him on the motorway, he was doing one four five
He couldn`t leave me behind no matter how he tried
I`d never felt so good before as he hit the safety rail
Seeing that Jap junk break in two was worth my time in jail
And together we`ll ride away...

I’m getting out soon, how I long for that day

My Norton is waiting, and together, we’ll ride away...

"One four five"?  Yeah, right, and it flies too.  Apparently, the song writer has never ridden a Commando before.  I knew a few guys who claimed to go Honda hunting on their Nortons--it usually if not always ended up with a broken Norton.

You can hear the song here:

This song was released in the late 1970's, when the sun had already set on the British motorcycle industry.  On the website, The Boys claim to be the original 1970's UK punk rock.  Not my cuppa tea, but it is about a Norton.
Posted by The Duke at 9:32 AM