The decline of the American hand tool industry: 1984

While doing some research, I stumbled across a fascinating document, available as a free ebook from Google:  Trends in International Trade in Nonpowered Hand Tools.  Report to the Committee on Ways and Means.  United States International Trade Commission Publication 1485, February 1984.

The American hand tool industry was in a decline, with 753 tool companies in 1982 compared to 767 in 1977.  The report documents the reason for this, including cheaper competition from abroad, especially Taiwan (because of lower wages, newer machine tools, lower quality steel) and declining wages for those in the hand tool manufacturing business versus American industry at large.  The following tables are especially interesting:

Below, little old Canada was exporting $128.5 million worth of tools to the U.S. in 1982.  Who knew?  Still, the Netherlands (with only 7 manufacturers) beat us out. 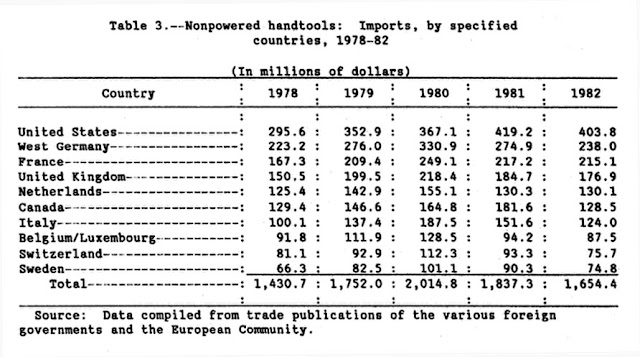 Given its source and mandate, the report is American-centric.  This was at a time when American companies were over in England buying up the much older British tool making firms, which unfortunately usually translated into stripping assets, shutting factories, and simply taking the famous names and brands to stick onto lower quality products ultimately made in China.  The table below shows that, at least in 1982, the Yanks were exporting more tools to the U.K. than they were importing, resulting in a trade balance in favour of the Americans. 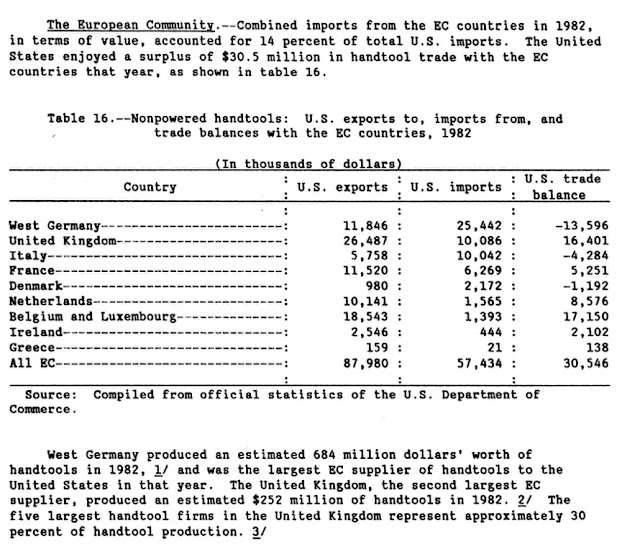 Interesting that only five large British handtool firms could account for 30 percent of production then.

Below, problems with U.S. employment in the hand tool manufacturing industry: 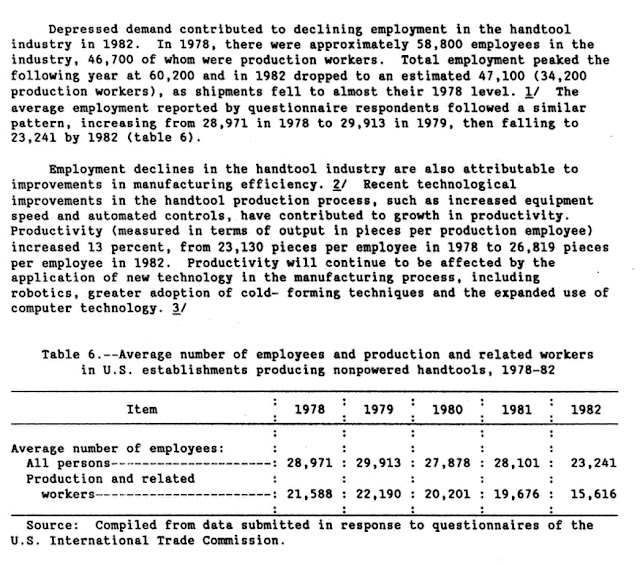 Finally, an interesting insight on how tools are produced and distributed in Japan.  In 1981 they had 3,525 factories making these items.  Compare that with the U.S. figures given above.

We've also featured several Japanese tool makers on this blog, but tracing the tool makers can be very difficult.  I guess the following explains why.