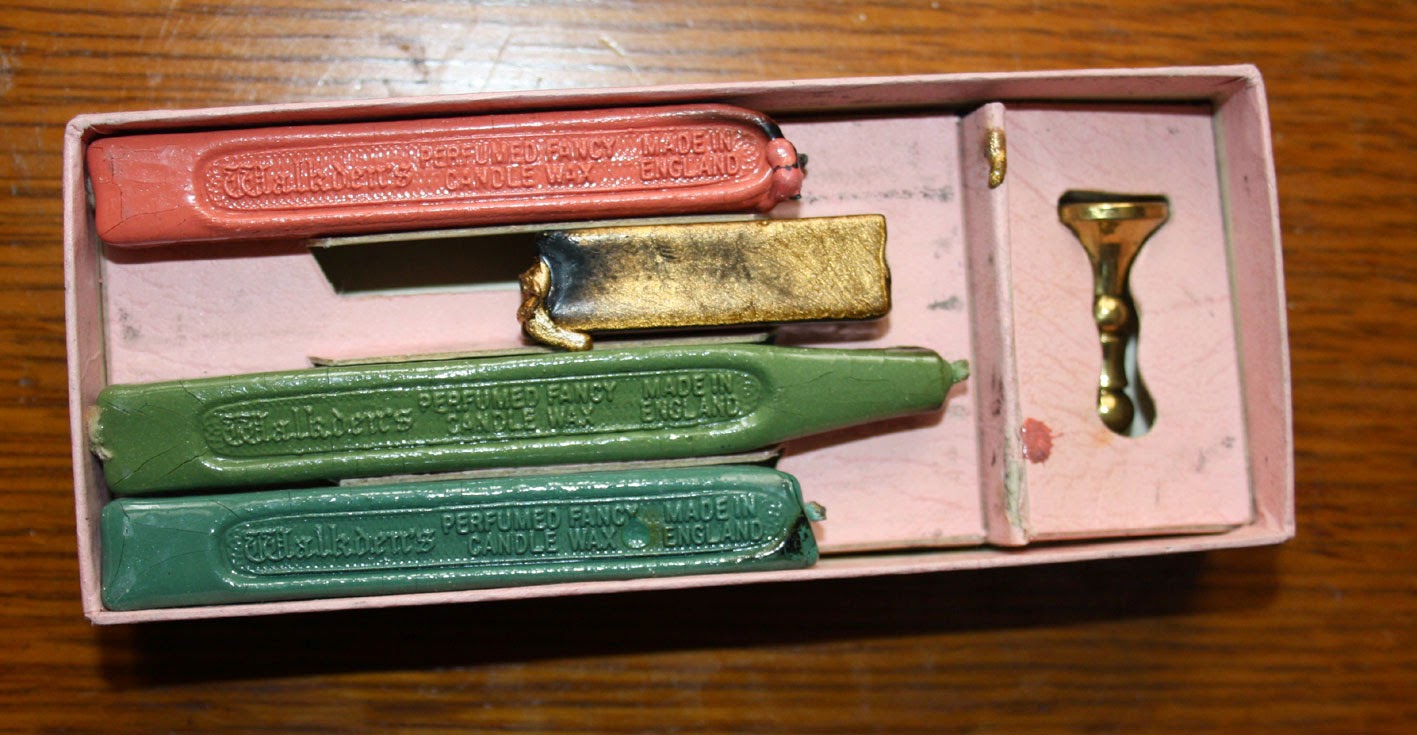 My wife has had this "Mura" sealing wax set since she was a teenager. There is an elegance to sealing an envelope with melted, perfumed wax into which you press your initial that cannot be even approached by an email.

According to Walkden's Ink:  The Early Years, Philip Cooper took over his father's stationary business in Shoe Lane, London in 1883, and in 1891 it became Cooper, Dennison & Walkden Ltd. This reflected the association with, and possible partial ownership by, E.W. Dennison, a large American manufacturer of stationary products in the U.S. It also reflected the name of the British company's most successful product range: Walkden's inks.  Walkden's had been located right on London Bridge since 1706, and had come up with a better iron gall ink. The company had to move off the bridge in the mid-1760's to comply with a city decision to remove all buildings from the bridge to facilitate traffic flow.  Walkden's exported their ink to North America.  (When George Washington died in 1799, amongst his papers was
discovered a wrapper from Walkden's Ink.) 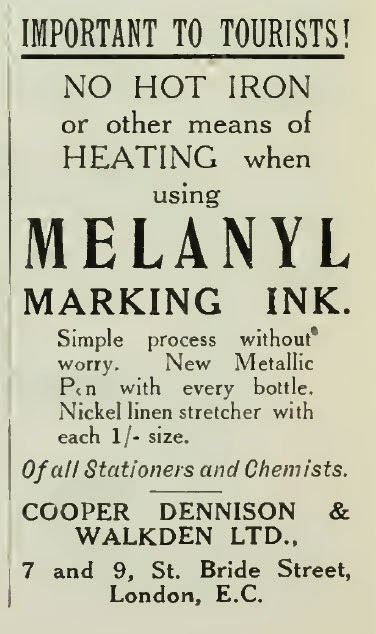 The "Mura: trademark was first registered by the company in 1924.

The firm shut its doors in 1983.  Below, the fatal announcement in the London Gazette: 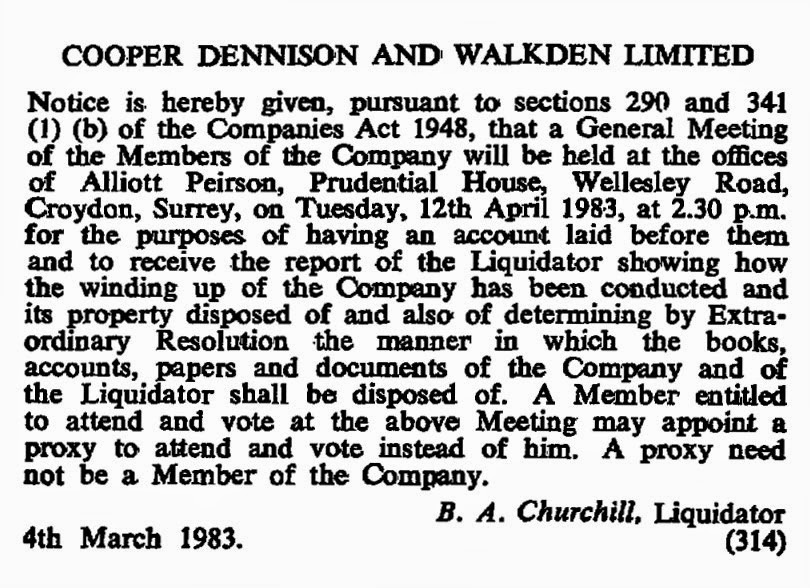 In 1844, Aaron Dennison was in the jewelry business, but needed boxes to contain his products.  He decided that he could make better boxes on his own.  Buying his own supplies, he began to make boxes in the old family homestead in Brunswick, Maine.  His father and daughters were put to work constructing these first boxes to be made in America. Demand quickly began to exceed supply, so Aaron invented the first box-making machine.

Workplace scheduling was different back then:


"In the old days when they were making boxes in Brunswick they didn't have any time clocks and rules and regulations, and all of the other accessories necessary to the modern factory. If you felt like a piece of pie about eleven o'clock in the forenoon, why you just left your work and got it at a little bakery across the street."


By 1856, the company had added tags to its merchandise.  This eventually included shipping tags, which were then called "direction labels."  While you could buy expensive linen ones from England, most merchants put their shop boys to work making them out of left-over cardboard.  These usually didn't hold very well, resulting in the expense of lost packages. Dennison came up with the idea of reinforcing the hole with a paper washer on each side, patenting the idea in 1863.  Once again, the company was deluged with orders, so Dennison applied himself to developing a tag-making machine, aided by Charles Sawyer of the Perkins factory and Charles Moore of Moore & Wyman.

In 1863, Aaron Dennison turned to firm over to his younger brother, E.W. Dennison.  Aaron went on to become the father of American watchmaking, introducing the principles of interchangeable parts to this industry.

In 1865, red-bordered gummed labels were offered.  Initially called "Stratton's Gummed Labels" after their originator, W.D. Stratton, Dennison eventually bought the rights and sold them under the comopany name.  This was followed by Christmas tags and package seals, which quickly became very popular.

Shipping the merchandise continued to be fraught with difficulties. For instance:


"One morning in the early seventies when the Dennison store in Boston was at the corner of Milk and Hawley streets the truckman who carted the goods in from the Roxbury factory reported that all of his horses were sick. An epidemic had seized thousands of horses in the city and none could be had elsewhere. Finally H. B. Dennison (son of the founder) asked for men to volunteer to pull a truck to Roxbury and back. Twenty-five husky young fellows volunteered and pulled a truckload of tags, labels and boxes from the factory."


In 1878, the need for larger premises led to the consolidation of all activities except box-building under one roof in Roxbury.  (Box making remained in Brunswick, only moving to Roxbury in 1894.) Also in 1878, the firm was incorporated as the Dennison Manufacturing Company.

In 1884, Charles S. Dennison travelled to London to open a branch, entering into a business agreement with Messrs. Cooper & Walkden, resulting in the creation of Cooper, Dennison & Walkden.  In 1912, the partnership was dissolved and the Dennison Manufacturing Company was incorporated as an independent British company.  I don't know why the British firm continued to include Dennison in their company name.

In 1897, production moved to a new location in Framingham, Massachusetts, the former plant of the Para Rubber Company, which provided a floor space of over 16 acres.

By 1919, the firm had grown to 2600 workers, making 10,000 stock items, and producing 15 million pieces of merchandise per day.  There was great loyalty among the workers, with many having been employed for over 25 years. 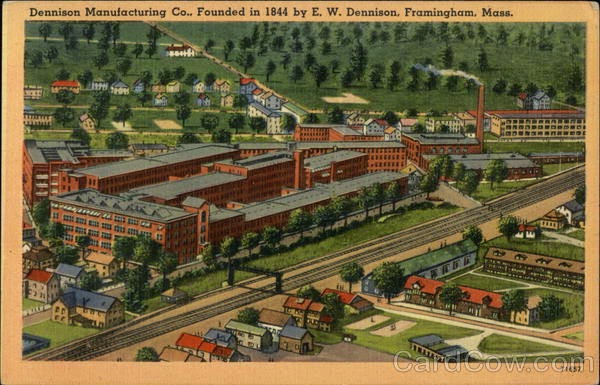 At its height, over 3,000 people were employed at the factory. E.W. Dennison's grandson Henry S. Dennison created a progressive company culture in the early 20th century, establishing a kindergarten on site for employees' children, a health center and a shareholder program for his workers.

Dennison was bought by the Avery International Corporation in 1990.  Soon afterwards, the original factory in Framingham was closed.
Posted by The Duke at 9:07 AM

Philip Cooper the owner of a UK business trading as Cooper & Co, Ink Manufacturers and Quill Merchants in London had a son called Dennison Ray Cooper born Clapham, Surrey in 1883