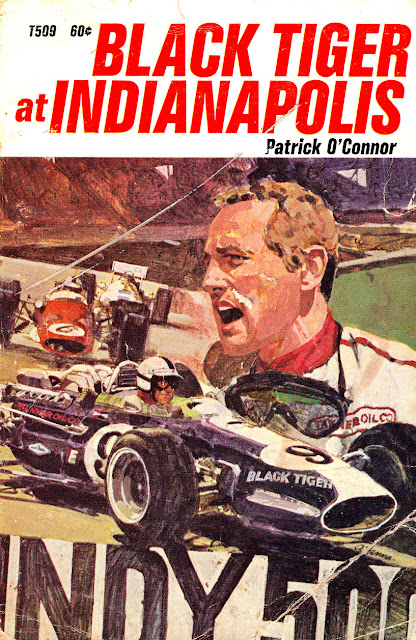 I think that the face on the cover pic bears more than a passing resemblance to Paul Newman, who was at his auto racing and acting height when this edition was published.  If so, I doubt that Newman endorsed this use of his image.

"Patrick O'Connor" was the nom de plum of Irish-born Leonard Patrick O'Connor Wibberley.  This particular book was first published in 1962, one of a series of young adult books about a fictional "Black Tiger" racing car.  Wibberley is perhaps best known for five satirical novels about an imaginary country Grand Fenwick, particularly his 1955 book, The Mouse That Roared (which was made into a 1959 movie starring Peter Sellers).
Posted by The Duke at 9:54 AM

Wow, nice! Where did you find this? Definitely P.L. Newman take-off on that cover. If written in 1962, it would be set in the Roadster Era, just about the time that Jack Brabham came to shake things up with a rear-engined Cooper.