Somewhere I've picked up this Witte "3-kant" ("triangular") Phillips screwdriver.  It's nicely made with a hardened tip.  I've never encountered any tools by this manufacturer before or since.

The history of Witte Werkzeuge goes way back to 1895 when a company was founded by Conrad von der Becke to manufacture sewing needles.  In 1805, Stephan Witte, a master needle craftsman, partnered with master tailor Franz Hermann Herbers to put production on a more modern footing.  By 1816 the company was producing 10 million needles a year and giving the British, formerly pre-eminent in this market, a run for their money.  The British pulled ahead in 1827 with machine-produced needles offering a much higher level of precision.  It took until 1840 for Hermann's son, Stephan, to reproduce the British production techniques.  Things chugged along happily for another half century until the first World War, which devastated the needle market. Then came the Second World War, which wasn't kind to the company.  In 1954, the firm discontinued needle production and moved into hand tools.  Ths proved a smart move and, in 1975, a new production facility was built in the Iserlohnerheide, making 200,000 screwdrivers a day.  This put Witte into place as one of the largest manufacturers in Europe. There's a Canadian connection as well.  In 2011, the company acquired a majority holding in the Toronto-based automotive supplier Van-Rob Stampings, Inc., which has supplied both General Motors and Ford with small stampings since the early 1980's.

As an aside, Iserlohnerheide has an interesting technology museum, Historic Factory Maste-Barendorf.  The cartoon below is from the city's website: 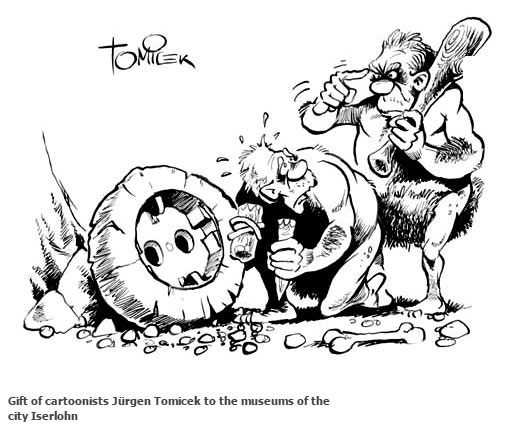 Thanks, You wrote awesome, I have learn lots of things from your screwdriver toolbox article. Its really helpful for any readers.