Restore the voice with Evans' Pastilles, 1912 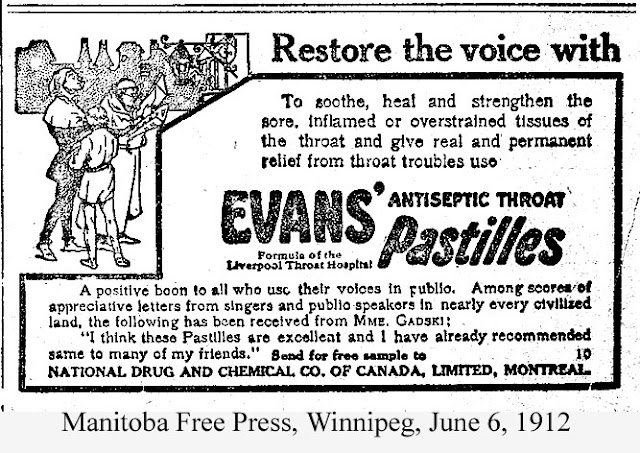 Scanned from an old newspaper I found in a thrift store.

The National Drug and Chemical Company was a wholesale outlet founded in 1905 by Canadian David Wesley Bole (February 15, 1856 – June 24, 1933). Born and educated as a pharmacist in Lambton County Ontario (which was then known as Canada West), he had previously founded the Bole Drug Company in Winnipeg in 1898.  Bole Street in Winnipeg is named in his honour.  The firm prospered and was bought by the McKesson Corporation of San Francisco in 1991.

I've no idea about the "Liverpool Throat Hospital." Mme. Gadski probably refers to Johanna Gadski (1870 – 1932), a celebrated German diva of the era.
Posted by The Duke at 10:03 AM