Above, a Hunter slot head screwdriver in my shop.

Beginning as early as the 1950's, Hunter Tools made a variety of small tools targeted at the home shop market.  Their primary product seems to have been a self-starting screwdriver based on a 1946 U.S. patent assigned to John Hagness: 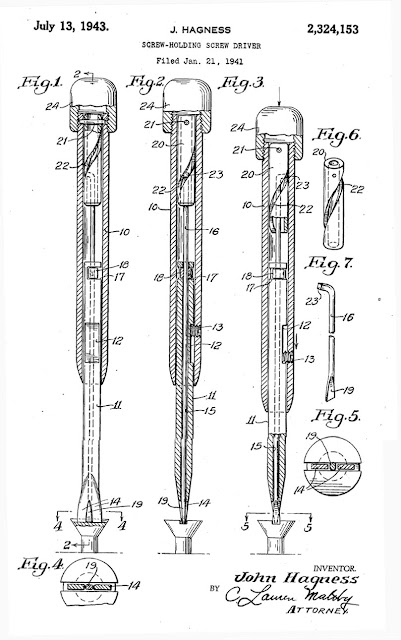 This was eventually marketed as the "Magic Tip" but they also marketed the "Smitty" Allen key set and a magnetic pick-up tool rather awkwardly named the "Re-Chut" along with the equally poorly-named "Tork-It" screw driver. Their best offering seems to have been a neat little lever-operated bench micrometer.  Over the next two decades, according to their ads, they moved location a number of times while remaining in the greater Los Angeles area.  The company was acquired by K-D Tools in 1979.

I still use the M12S Hunter screw holder driver to insert set screws in old radio dials, some of which are recessed almost an inch on big dials.
BTW, I enjoy browsing your site occasionally, and especially when I find a blog that applies to my interests.

I still use my set of sub miniature screwdrivers from Hunter Tools, circa 1970s. Ah, nostalgia....

Great to hear! Love when these tools keep on being useful.