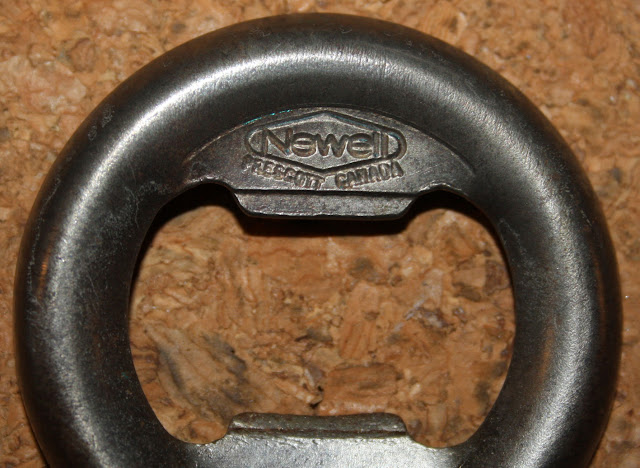 Above, a bottle opener.  Below, several Newell hacksaws:

The W.F. Linton Company of Ogdensburg, New York was incorporated in 1902 to manufacture brass curtain rods but went belly-up the following year. Edgar A. Newell, a prominent businessman in the same city, bought the firm and renamed it the Newell Manufacturing Company.  His son was hired to run it after Edgar started a new firm in 1908, Newell Manufacturing Company Ltd., in Prescott, Ontario just across the St. Lawrence River from Ogdensburg.   Initially, brass curtain rods were the only product, but the line was eventually expanded to include many other products that required plating, including towel racks, stair nosings, ice picks, and other items (presumably also including bottle openers) requiring a finish of brass, zinc, or nickel.   Many were marketed under the "Newlco" trademark.  By 1917 the company began using a non-tarnishable laquer, making its curtain rods cheaper to produce and better suited to lace and ruffle curtains.  This got the attention of the Woolworth's department stores, which began to carry the Newell products.  In 1921, the company purchased the Barnell Manufacturing Company of Freeport, Illinois and renamed the Western Newell Manufacturing Company.  In 1923, the machinery of the the Universal Hack Saw Company of Hamilton, Ontario was purchased and moved to Prescott, adding nickel-plated hacksaw frames to the company's offerings.  In the late 1930's, a third factory was established in Los Angeles.  During World War II, the Freeport factory produced more than 230 million metallic belt links for machine guns within a two-year period, earning an Army/Navy E award for excellence in wartime production.   In 1955, the company built a $200,000 factory at a new location in Prescott.  In 1966, all of the Newell companies were consolidated under the umbrella of the Newell Manufacturing Company of Illinois.  The next four decades saw the Newell company absorb a handful of other companies in related industries, including the Boye Needle Company, WearEver and Kirsch.  With the purchase of Rubbermaid in 1999, the new larger company became Newell Rubbermaid.  This was dubbed the "merger from hell" by Businessweek magazine, since shareholders of both parent companies took a bath.  Nevertheless, the corporation continued its policy of "growth by acquisition" by absorbing American Tool Companies in 2002 (adding the Irwin and Vice-Grip brands) followed by the American Saw & Manufacturing Company in 2003. It's thirst for new companies came at a price: in the United Kingdom, the company was criticized for its closure of a number of factories, including those of Parker Pen, Berol, Record and Marples tools.  In 2015, the corporation became even bigger when it merged with Jarden Corporation, creating a $16 billion company to be named Newell Brands.

In March 2000, the Newell-Rubbermaid shut down the original plant in Prescott, putting more than 100 people out of work. The jobs were transferred to the U.S. facilities.  In 2002 Newell's presence in Prescott ended completely when it closed down the marketing office of Newell Window Finishings.