Giving the brush off

I have a number of old wooden brushes I keep scattered around the shop for cleaning the workbench or brushing sawdust off of my various power saws and jointers.

I happened recently to notice the maker's information on one, which got me interested in seeing if any of the others were made by the same company.  Nope:  it seems that there was a lot of competition in this market at one time.

Below, a Boeckh.  What a great trademark!  Genuine hog bristles! I've previously done a post on that Toronto company.

Below, an offering from another Canadian company, but sadly the maker's information is too worn to make out:

Below, a Crown-Meakins offering.  Meakins & Sons was founded in Hamilton, Ontario in 1852 as a manufacturer of paintbrushes and rollers.   They started out making furniture and brush blocks, but in 1865 they acquired the brush company's assets and the furniture side of the business was wound up by 1871.  The family remained in family hands until 1957.   It was acquired by the Crown Brush Company in 1970.  The combined company, Crown-Meakins, still exists and still makes brushes out of Montreal, Quebec.  According to their website, "Crown-Meakins is privately owned and managed, with the offices of the principals just footsteps from the production lines assuring the highest quality products." 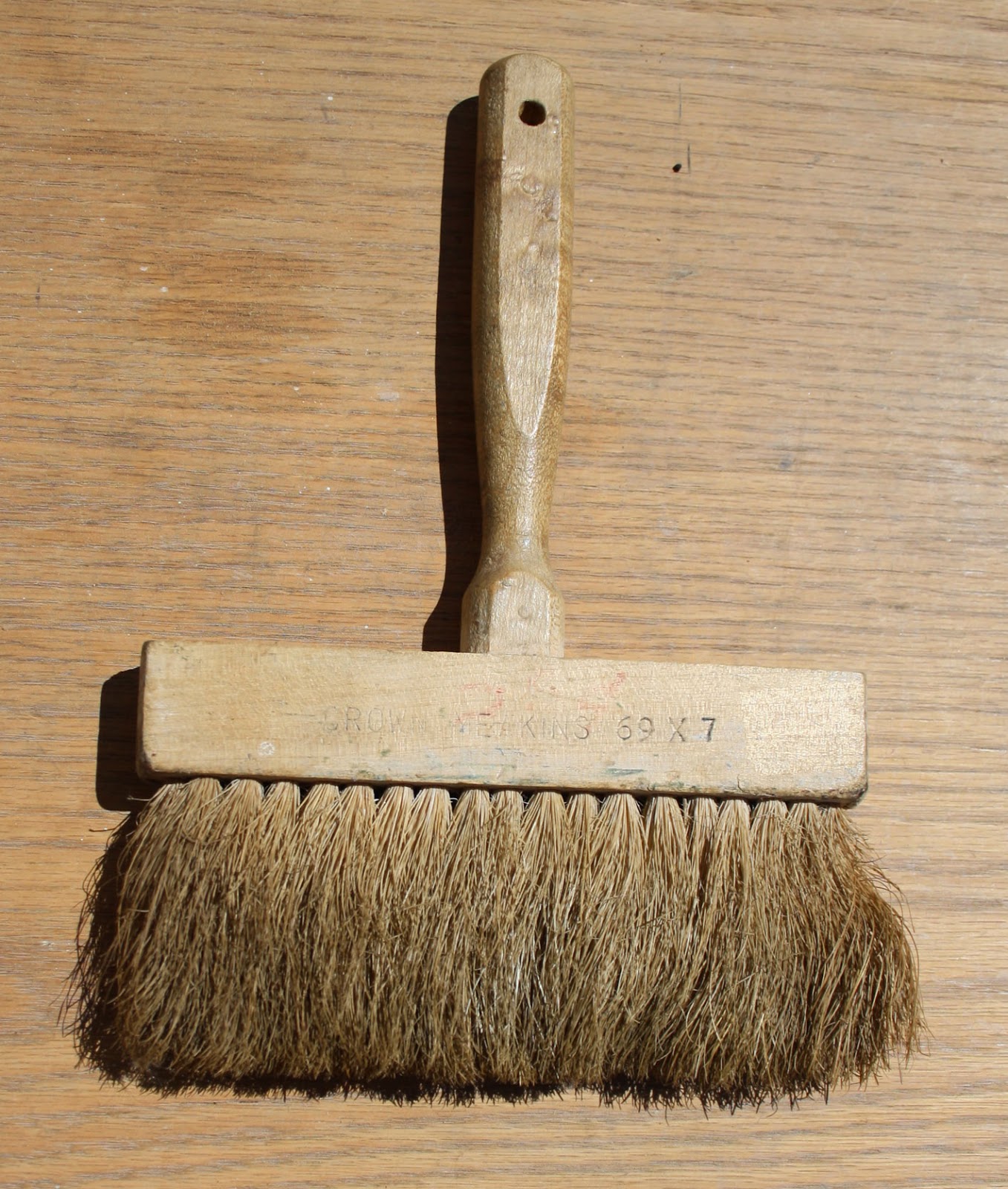 Below is a drafting brush made by Dietzgen (from sterilized horse hair, no less!)  I'm old enough to have had drafting classes in high school shop, and all too well remember having to use this kind of brush to sweep away the bits of eraser from my badly done hand lettering.  Drafting was never my strong suit.

Eugene Dietzgen was born in Germany, but at age two accompanied his father to Tsarist Russia where his father worked as a tanner.  In 1881, his father arranged for Eugene to go to America to escape the Kaiser's draft (and to safeguard his father's socialist literature, which had already landed his father in jail in Germany).  He arrived at the age of 19 and began working for a German drafting company.  In 1885, he moved to Chicago and founded his own engineering supply house.  By 1893 he was manufacturing his own products, including T-squares and drawing boards.  These early products are now prized by collectors for their craftsmanship.  Over the ensuing decades, the company grew and introduced many "firsts", including the first commercially viable polyester drafting films in 1959.  In 1995, it acquired the Klingler Company.  In 2002, Dietzgen itself was acquired by the Nashua Corporation, which maintains production facilities in Tennessee, New Jersey and California.

One of the Dietzen buildings in Chicago is now a heritage site.  It's associated with the photo below of a car elevator.  For the full story, read "A Chicago Car Elevator Mystery and the Man Who Invented Dialectical Materialism." 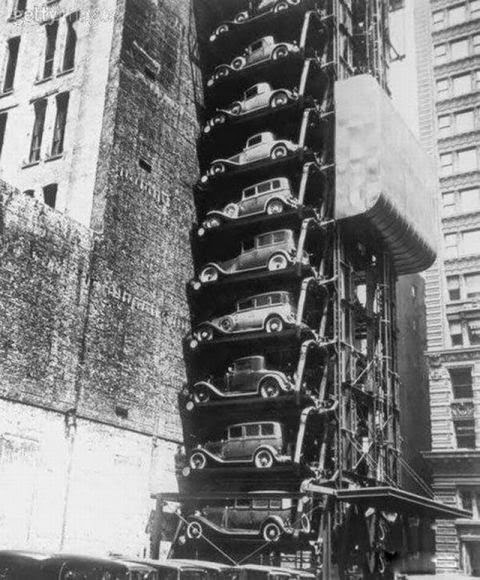 Below, a Dixon product.  Today's Dixon Ticonderoga Company is one of the oldest corporations in the U.S.  One day I plan to do a blog entry on the company and its Canadian subsidiary.   (I've no idea why this brush would be called a "hardpan."  Any elucidation is most welcome.)

Finally a "6 inch paster" from Warner.  This is another company that previously drew my attention.  Happily, they're also still making products in Minnesota. 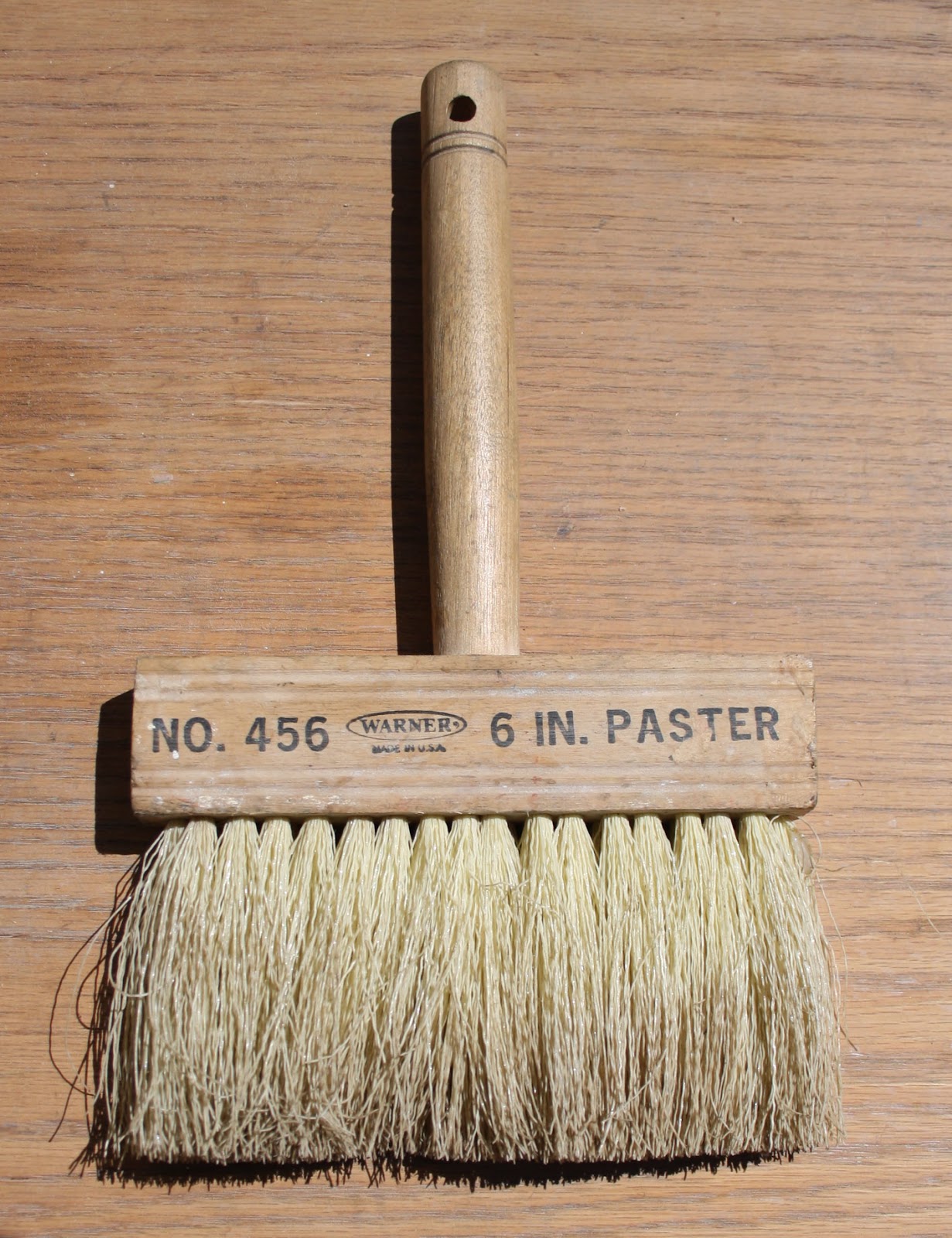 I also have a BOECKH 10 STAR (note: not hyphenated like yours) brush like the one in your first photo. Still using it every day, I found it in our house along with an old T-square, when my dad bought the place in 1964. Researching the former owners, it seems they were in business from at least as far back as the 1920's until the late '50's, painting houses, interior designing and some sign painting. My brush does not have the boar's head logo on it, nor the hole in the handle, however mine seems to have a shinier finish than yours (looks like varnish). Any idea as to how old the brush might be?

The Boeckh company changed hands in 1965, so I presume that any brush with their name on it can't have been made later than this. I can't date my own brush any more accurately than that.