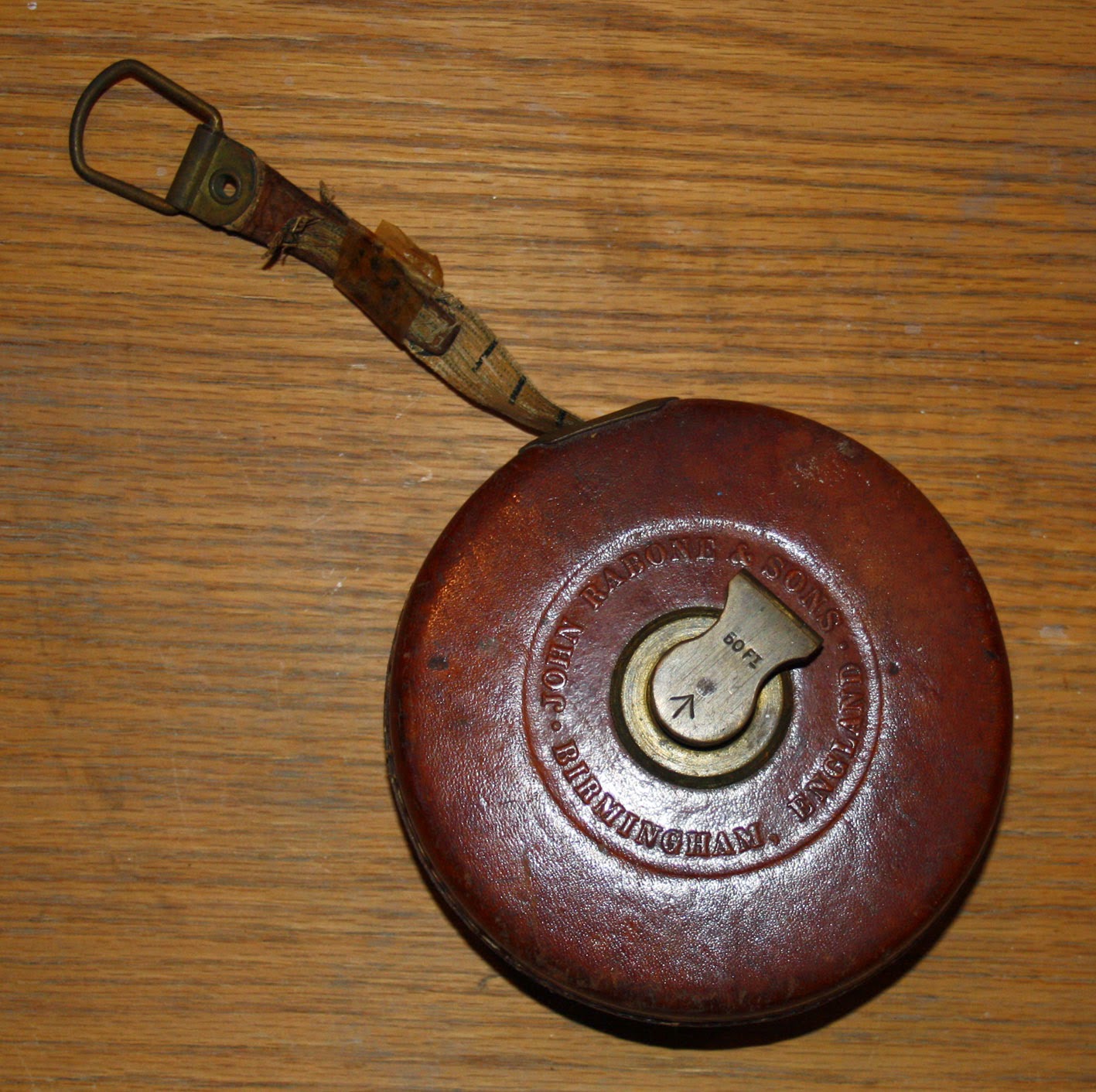 Linen tape rules were once the standard before steel rules reached a level of quality that could replace them.  This particular elegant, leather-bound rule was made by John Rabone & Sons of Birmingham, and carries the British “broad arrow” mark on the brass handle that signifies a tool made for the British war department or ministry of defense.

Michael Rabone created his rule- and tool-making company in 1784.  After his death in 1808, his wife ran the company until her son John took it over in around 1835.

He introduced steam-driven machinery, although the workers resisted and one man even stabbed him the chest when rebuked for not using it!  In 1871 the company moved to a new factory which it named the Hockley Abbey Works (their logo later incorporated three triangles signifying Hockley Abbey).  In 1877, the company became John Rabone & Sons.

James Chesterman started his own business in Sheffield in 1820. He invented an automatic rewind tape measure and in 1837 the company adopted the name “Bow Works” with a bow becoming their trademark.  The company was known for the quality of its tapes, steel rules, callipers and squares. 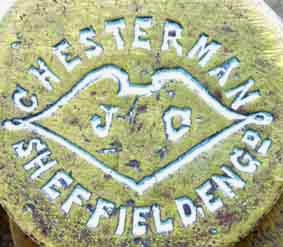 In the 1960's, a number of specialist tool making firms in England had to join forces or go under.  So, in 1963, the Rabone and Chesterman companies merged and their products were marketed under the Rabone Chesterman name. 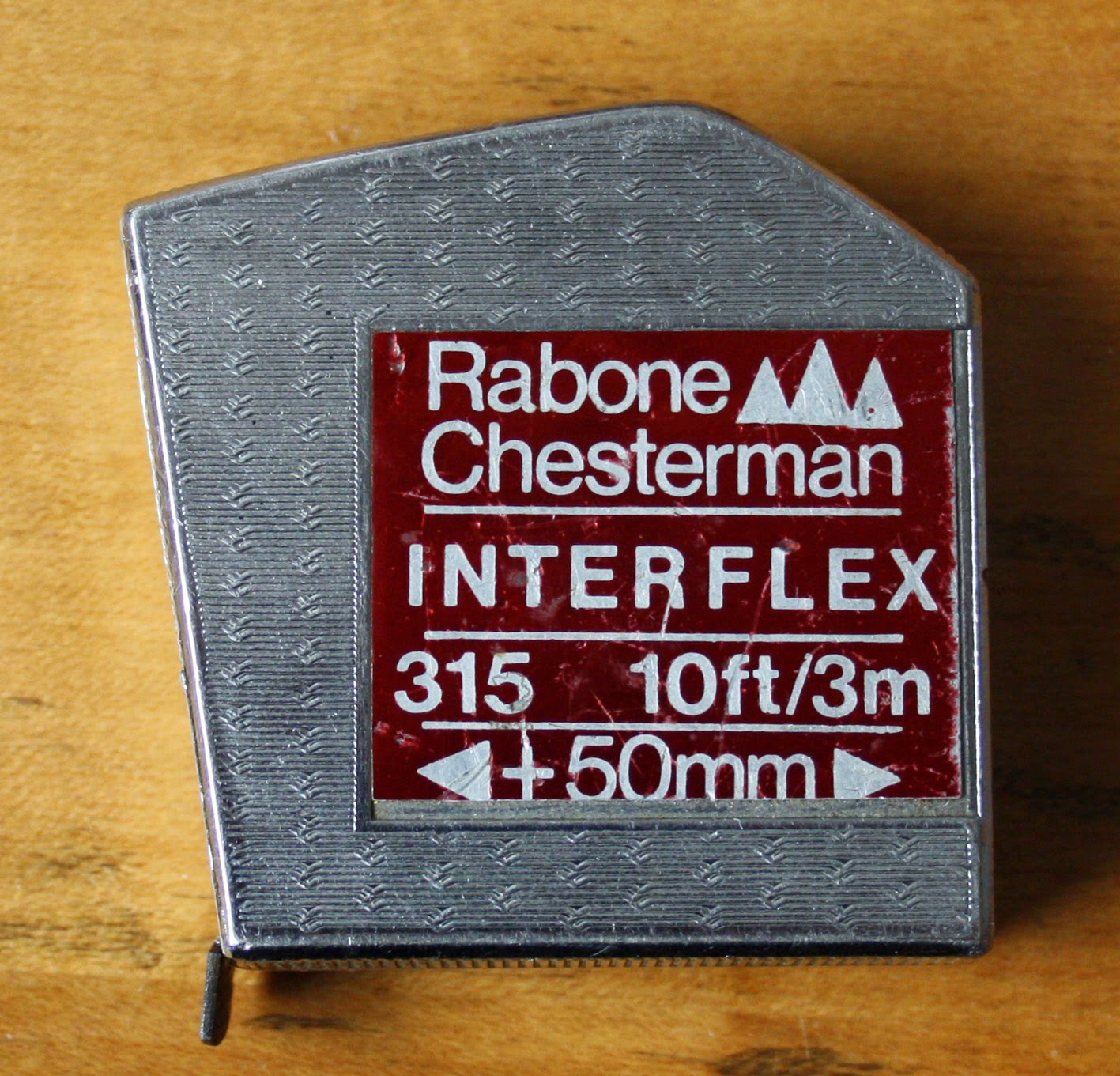 In 1970, with the acquisition of Fry's of London,  another British toolmaker, the company was renamed RCF Holdings (Rabone Chesterman Fry's).  A year later, Parry and Bott joined the group.  Then, in 1981, the company was acquired by the Bardsey Group.

In 1989, Stanley Tools, one of the Great White sharks of tool empires, purchased the assets of Rabone Chesterman from Bardsey PLC.  The sale didn't come cheap:  $14 million changed hands.  Since then, the name has disappeared from their product lines.  Pity, although one suspects that under Stanley's ownership Rabone Chesterman would have been just a label.
Posted by The Duke at 9:46 AM

Hi there, I'm grateful to your blog for helping me to name a splendid Rabone Chesterman tool that I found in my Dad's garage!
It is apparently a "Precision Vernier Height Gauge".
I have all the associated "bits" and it is in the original bespoke wooden box.
Now all I need to do is find a buyer! lol

Hi, I started at Klargester, a firm making and selling cesspools, cesspit and bio waste units. One of my first tasks was to get some new tools from stores, including a retractable tape. When I was made redundant, this fine product accidentally made it into my toolbox! Just a bog standard cream coloured, plastic cased retractable rule. I've just got it out of the kitchen cupboard and although it's a standard item, it got 'Made in England' proudly printed in red on the scale. I looked up the make and found this page. This thing is 37 years old and works like the day it was manufactured, so smooth in its operation, locks beautifully and I'm sure it will last another 37 years, I just hope I don't lose it. Thanks Rabone and Chesterman for a wonderful product! Out of interest, it's the SK 3 MES.

Thank you for this information, now I know my rabone and Chesterman wooden ruler is from 1963-1970 looked older. Not worth a lot but sure cool to have that in the tool box. It will out last my next 20+ new cheaply made tape measures for sure
You don't find quality like that anymore

Too many old top quality manufactures have gone the same way. damn shame

I just removed a kitchen from my 30 yr old home and when i ripped the old cupboards up, on the floor i found a 90cm hold out wooden Robone Chesterman ruler. It's in mint condition!! Obviously the builder didn't notice it there as he placed the cupboards over it 30 odd yrs ago.

Today I found a 2ft Rabone ruler, must have been my Dad's. Bit of elbow grease and a small wad of Brasso and it looks great. I'll leave it out on my desk top and hear what comments my grand kids will make of it!

Hi guys, I've got a rabone set square (engineers square) it was my grandads and I've used it for a good decade. Any idea how old they are or how to find out? And any ideas in how to clean it up?

Can you send a picture? gerald@vanwyngaarden.ca

Yes I will send one when I'm back at the workshop. I should be back there on Thursday!

Retractable 3m rule. Nothing special I thought when I came across it in my old tool bag from the days when I worked offshore in the North Sea. I think this was employer supplied, it is branded RS - I am old enough to remember when RS was Radio Spares!
This little tape was probably never used, not much call for it when I was offshore. When I noticed the Rabone Chesterman name it was not one I was familiar with. (My Dad would have been.). It is now in daily use in the front pouch of my workshop apron. What a discovery!

Hi There,
I bought a Rabone Chesterman levelling instrument in 1990.
Today cleaning it I noticed it says Made In South Africa.
When did they started producing in SA?

Thanks for your comment. You can send a picture to me at gerald@vanwyngaarden.ca and I'll add it to the post.

I have a few Rabone Chesterman tools, I have just taken the buble out of a Maxi view level No 1403 1mtr/40 inch. Anyone know where I might get a replacement ??. Never realized these tools were so old, I'm still using them...

Hi, I have a j.Rabone and sons linen tape measure. It was given to my grandad who passed away this year age 93,when he started as an apprentice in the Birkenhead ship yards!

Hi from Australia...I recently found my grandfathers old Rabone & Sons spirit level - 910mm x 80mm x 30mm. Unfortunately, it's missing one end plate. Anyone know where I can get one?

I started my working life in 1986 as an apprentice joiner with Tameside council. In my toolkit were a number of Rabone Chesterman tools. There was a wooden folding rule,a 45 and 90 degree combination square and a marking guage to name a few. I've still got them now, 35 years later!

I was given a RABONE YELLOWFLEX 3m/10ft YX 3 MES, by my employer in the late 1980's still have it, still use it despite emigrating to Canada more than 20 years ago. It says: "Rabone Chesterman" and Made in England on the metal tape.

The pleasures of good tools!

I have just bought a Rabone Chesterman Vernier Calliper 599, beautiful but missing the two locking screws and I would love to be able to replace them. Any thoughts. How could I find the thread diameter and pitch?

I have just polished my Grandfather's J. Rabone & Sons 6" steel ruler (No 42). It was issued to him during WW2 and it's stamped 1942 with the associated MOD arrow. He kept it in his top pocket for the entire war (which he survived) from Africa to Crete and throughout the Italian campaign. He passed last year upon turning 100. Lovely little thing - and I use it almost everyday in the workshop!

Superb, what a lovely back story, they certainly made their products beautifully. Take care.

Ive a rabone level stick 138 made in the USA.can someone tell me how old it is and how much to sell for.

I have in my possession a four part 12" folding Ivory ruler which belonged to my Grandfather marked "J.Rabone & sons. Makers" Does anyone know how old it might be & does it have a value? Jeffers (Stanmore,Middlesex)

I have the Rabone Chesterman Diameter tape 2m version as pictured in the photo. It was my grandfathers. Pretty nice tape even after all these years.

My Mother work in the accounting department for Rabone Chesterman in the 60's and 70's. When she retired they presented her with a leather bound retractable cloth tape measure (up to 66ft). When she passed in the early 80's I inherited it and added it to my tool box. I live in America and still use it today since we still deal in ft and inches. Its a great tool and a constant reminder of my Mom.

Thanks for the stories!

I own one of the later tools they made. A digital measuring stick. Sadly its just started to play up & cant rely on the measurments now which is a real shame as its been a tool I've relied on for nearly all my working life.
A company called Nedo seem to make something which looks very similar called the Nedo Messtronic. Shame I cant get mine repaired as it probably something quite simple

Hi. My grandad William Lawton and my father Rob Lawton worked at Rabone in Birmingham. My dad was sent out to South Africa to build the Rabone Chesterman factory in about 1970, in Rosslyn, just outside Pretoria. He became the MD and ran the business till he retired around 2012. Stanley didnt purchase the SA branch and it changed its name to Ross Tools. Feel free to message me if anyone has anymore questions. Kind regards James

I use my Dad's Rabone Chesterman Long life No 1302 folding ruler very regularly. Dad passed in 1990 and when I use it, it reminds me of Dad. It is so handy. Thanks for the
interesting information.