I always thought the reasons given for the F1 six wheel Tyrrell design might have been a bit exaggerated but it was certainly a novelty. The concept became the inspiration for this 1977 behemoth.

Robert Jankel, a tuner turned fashion designer left the garment trade and got back into the automotive business in 1971 by forming Panther Westwinds, building a Jaguar SS100 lookalike,  (expensive) one-offs and short run automobile specials.

By 1976 he needed a new model and from the Tyrrell came the layout for this car. The prototype was first shown at the London Motorfair in October 1977, a bit too late as Tyrell had cancelled the 6 wheel program at the end of the 1976 season, so the purported advantages for this layout disappeared. Jankel continued on with his twin turbo-ed Cadillac powered beast but by 1979 the project fizzled out.There were apparently two prototypes made, and they still exist today. 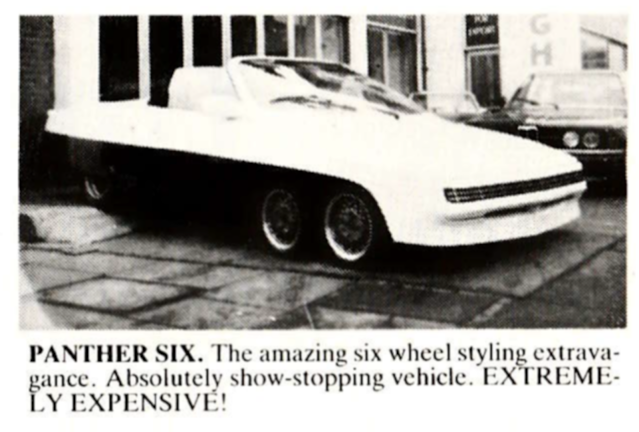 That my friends is one ugly automobile.

What a truly awful car. I mean - it's expensive enough to buy four fairly high end tires, but six? Think of the maintenance requirements. And for what? How does it even turn? lol.