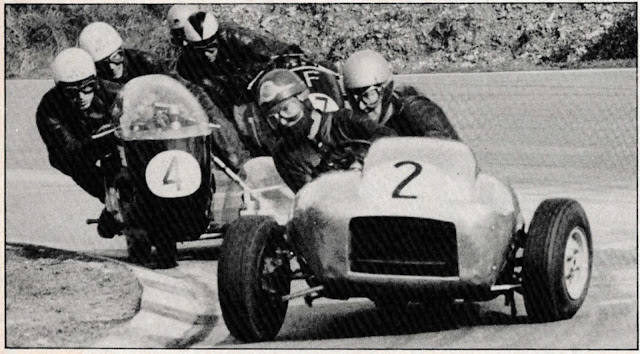 Owen Greenwood's Mini-based 3- actually 4 wheeler, somehow legal for sidecar racing in the sixties. I have been looking for the regulations that were creatively interpreted, this ain't no sidecar as the image below clearly shows. More here

Hard to believe they allowed that for even one race. Much have been pretty lax rules back then cause thats just a car with a narrow rear end. Great shot tho.

They're actually a different category, run with the sidecar races as "B3 cyclecars" in the British Historic Racing scheme of things.
Also notable are the Scitsu and the Mogvin.
The most famous & successful "bending of the rules" in sidecar racing was Rolf Biland's BEO, where the "two tracks" rule was evaded by partially staggering the front and rear main wheels tracks.

But I'm sure it did run with the sidecars in the sixties till they banned it.

The strangest part of the rulebook is that two wheels less than 8 inches apart (on/centre) were considered to be one. But perhaps that originates with the Austin-engined Brough Superior with two rear wheels from the 1930s.
Also engine size didn't seem to be regulated.