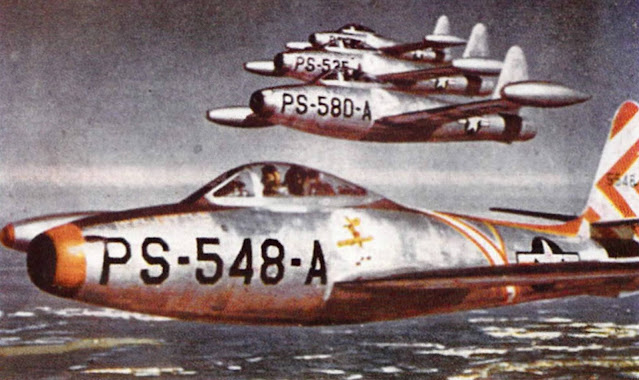 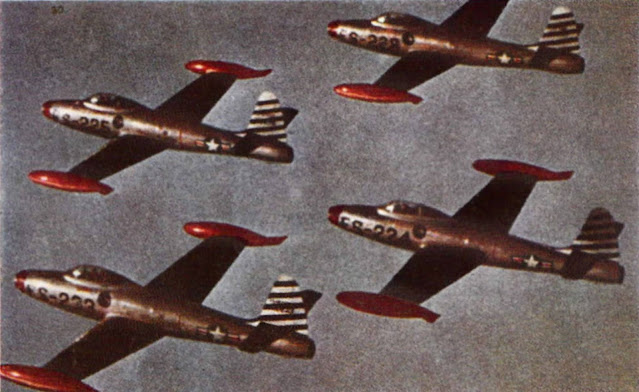 My BIL flew these in the Korean War. He told me the pilots laughed at the name Republic gave it - Thunderjet. They called it the Gravel Eater for its propensity to enter the overrun area before becoming airborne. Thunderdog was another.

From Wiki: The P-80 testing program proved very dangerous. Burcham was killed on 20 October 1944 while flying the third YP-80A, 44–83025. The Gray Ghost was lost on a test flight on 20 March 1945, although pilot Tony LeVier escaped. Newly promoted to chief engineering test pilot to replace Burcham, LeVier bailed out when one of the engine's turbine blades broke, causing structural failure in the aircraft's tail. LeVier landed hard and broke his back, but returned to the test program after six months of recovery. The top-scoring World War II USAAF ace Major Richard Bong was also killed on an acceptance flight of a production P-80 in the United States on 6 August 1945. Both Burcham and Bong crashed as a result of main fuel pump failure. Burcham's death was the result of a failure to brief him on a newly installed emergency fuel pump backup system, but the investigation of Bong's crash found that he had apparently forgotten to switch on this pump, which could have prevented the accident. He bailed out when the aircraft rolled inverted but was too close to the ground for his parachute to deploy.

After Bong's death, both the USAAF and Lockheed wanted to prove the reliability of the airplane. Robert E. Thacker from the Flight Test Division at Wright Field was ordered to select three other pilots, go to Lockheed, pick up 5 P-80s and take them to Muroc Army Airbase and fly each airplane for 500 hours. Thacker tapped Chuck Yeager, plus two other pilots and they put 500 hours on each airplane without further incident. [9]

So as long as you were as good as Chuck Yeager, NO PROBLEM! lol