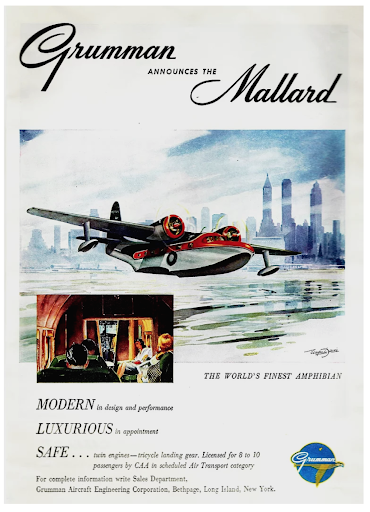 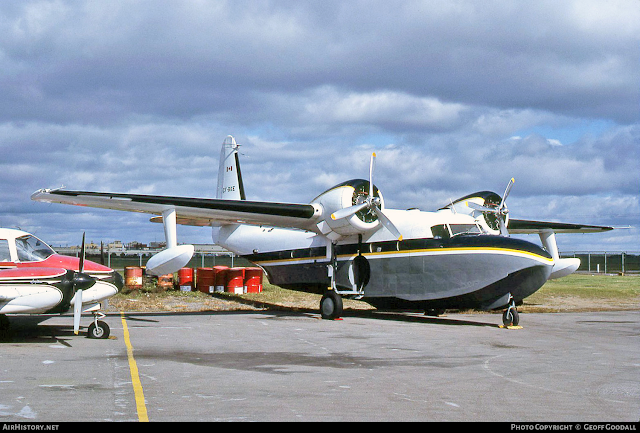 On September 27, 1946, the first production aircraft (c/n J-2, CF-BKE), was delivered to McIntyre Porcupine Mines in Toronto, Ontario, Canada. Shown above, it's still going today.
Introduced as a 10 passenger airliner for harbour to harbour service, few of the fifty nine built were purchased for that use. Most were purchased as corporate aircraft.
Canadians bought their share, c/r CF-GEV was bought by Canadian Breweries Ltd of Toronto. The Globe and Mail used one, CF-EIZ,  as a "flying newsroom"and Maritime province businessman K. C. Irving owned at least three.
A prominent user in the United States was Roy Fruehauf of the Fruehauf Trailer Corporation. Fruehauf owned and operated a fishing camp, Killarney Lodge at Georgian Bay, Canada, and ferried customers there from Detroit. Another Detroiter, William Packer of General Motors, also owned a Mallard, which he often flew to Killarney.
It must have felt like a Grumman fly-in at times up there!
Posted by Mister G at 9:41 PM