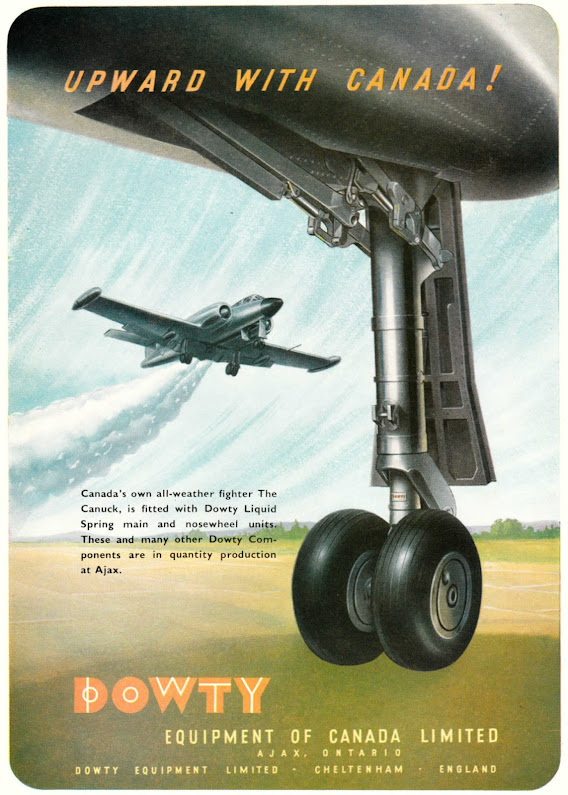 The company worked on landing gear with Avro and by the time of this1954 ad, was supplying landing gear for the CF100 Avro Canuck and working on the Avro Arrow. In 1954, the Canadian subsidiary generated half of the company's income.

In the usual musical chairs of company ownership this is the subsidiary of the British Dowty company set up in Canada in 1939. In 1995 it became part of a joint venture between French company Messier and Dowty then in 2005 the company was bought by Safron, became part of the Messier/Bugatti/Dowty group in 2011 and finally Safron Landing Systems in 2016.

Presumably this was (the Canadian offspring of) the same Dowty that made slightly funny-looking (because v. long at rest) air-assisted telescopic forks for mosickles after WWII. My poorly informed opinion is that, in the case of those forks at least, the designers' thinking was a little ahead of its time: that contemporary materials, and maybe production facilities, weren't yet capable of making a seal to last tens o' thousands of miles. And/or maybe the forks failed to clear other, untechnological hurdles; does anybody know?

I posted because of the awkward ad. :-) That would be the same Dowty, Somewhere in the pile of magazines I have an article on those motorcycle units, I'll post it when I find it.

Looks like the aircraft taking off has blown the left engine, judging by the smoke trail behind it.