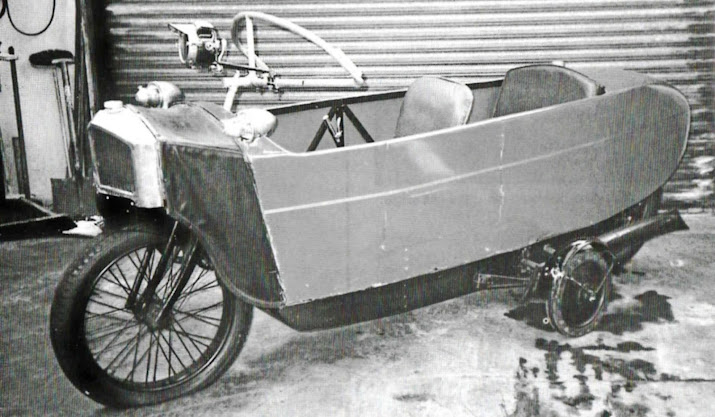 This tandem two seat device was made by the French automobile company Morgan Monotrace in the years between 1926-1929. The machine was powered by a horizontal 500 cc 4 stroke single. The stabilizer wheels were raised up as the vehicle started moving. I'd say the obvious development was to make it amphibious.

A reader's comment on the Feet Forward post prompted a bit of research and I found this picture in an old Classic Motor Cycle magazine. During the early days of motor vehicles, there was a segment of the population that liked the idea of a car-bodied two wheeler. One of these was Mauser, the German armaments company, who produced a device like this from 1924 to 1927 and licensed the technology to the French Morgan Monotrace who continued to develop the idea. This is the French vehicle, apparently pictured in England so they did get around! The company closed in 1930.
I think the looks alone would be enough to curb sales- a boat on wheels, and look at that windshield!- and one wonders how seamless the stabilizer wheel activation might be. The passenger looks a bit sheepish being caught on film.
Posted by Mister G at 9:51 PM

The Scripps Booth Bi Autogo also had the same "outrigger" set up.