Crash- with tourists... and history (updated) 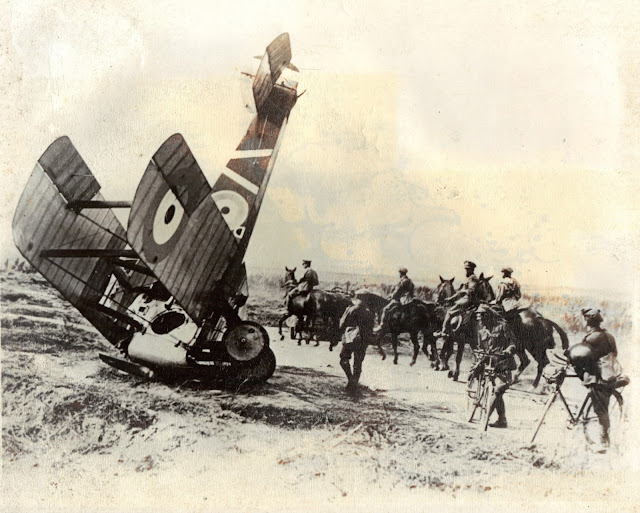 I found this 8x10 decades ago in some forgotten location, and recently re-found it in a cheap frame as I was cleaning up, covered with a diploma. I still like the scene so I scanned it to post. Five days after posting this undentified photo, I received this email from the UK...


Have just discovered your picture titled 'Crash with tourists'. The soldier with the 'bike' is/was my father serving with the British army in northern France during the 1st World War!!!!
He was at the time a Warrant officer 2nd class (CSM) and my eldest brother discovered the picture in a 'war book' and remembered being told the story of the crash and the photographer 'screeching' to a halt and using a tripod camera taking several images. Small world!!  My father died in 1951 having fathered 10 children. I am the youngest surviving son and I'm 76.


Enclosed is a copy of my father's Discharge paper dated 22nd Nov. 1919, also enclosed if interested, a copy of my parent's Wedding Cert!!
As a family, we lived in Westminster, London throughout the 2nd world war with attendant near misses and even those siblings who served in the armed forces all emerged unscathed. Lucky or what?!!
Regards, Brian Carter. 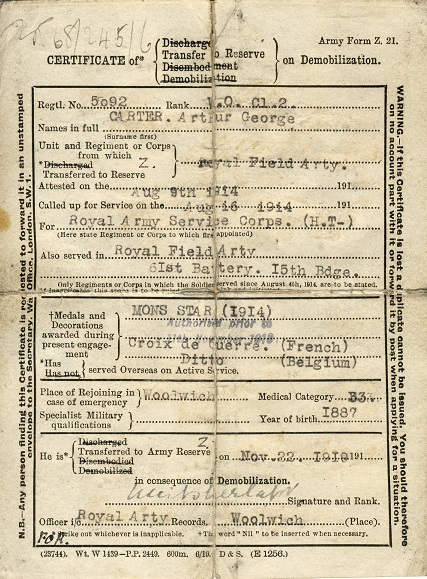 So, in 1912, a 25 year old bachelor Arthur George Carter married the girl next door, 22 year old "spinster" Ellen Elizabeth Lean (seems cruel to label a lovely 22 year old girl a spinster!) and presumably set to establishing their family. The church where they were married- completed in 1729- is still looking magnificent in London.
Two years later he went off to war in France and at some point he was captured on film in the crash photo. He returned and was demobbed a year after Armistice Day.
The family of ten children grew, survived WW2 and presumably have had their own families.
The internet is fun. Now I'm waiting for the pilot's family to identify him and explain how this minor-appearing crash happened; and also for the photographer's family- to present his case for copyright infringement.
Posted by Mister G at 7:13 AM