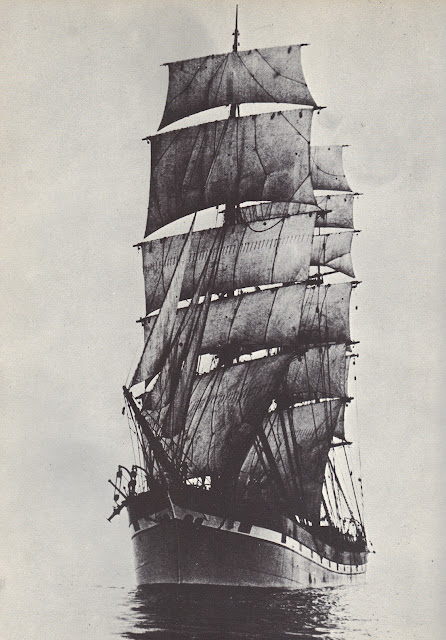 Coming out of the fogbank in a very light wind is the fully-rigged ship Dalgonar, here in traditional British fake gunport colours. Built in Southhampton in 1892, there isn't much on Google about her career but in 1913, after leaving fully loaded from Callao, Peru she had her cargo shift during a storm. She nearly capsized, continued to list so far she could not be righted and was abandoned after the four day storm, her crew rescued by the French barque Loire. The Dalgonar did not sink, she drifted 3700 miles to beach on a coral reef on the island of Maupihaa in the Society Islands.
http://www.plimsoll.org/resources/SCCLibraries/WreckReports2002/20224.asp
Posted by Mister G at 2:43 PM

I'll comment that the captain of the Dalgonar was killed whilst trying to rescue some of his men. The storm she encountered was particularly bad and while the ship was in such a bad position, being on her beam ends, that Captain Isbister gave the order to cut away the masts to help right the ship.
Somehow the men achieved this whilst many waves were coming over the ship, but the effort did not improve the listing much. The captain and his officers decided that the ship would sink at any moment and tried to launch the starboard lifeboat (The ship was listing on her port side and the port lifeboat had been torn apart by the waves.) with 10 men inside. The sea was too heavy however and the lifeboat got swamped, and only 7 of the men managed to get back onto the ship. The captain climbed onto the starboard rigging with a coil of rope to try and save the men but a big sea caught him and he was hurled onto the deck head-first, and then carried into the sea by the flood of water. Because of air in the hold, the boat never sank and the men lived on ship's biscuit and water in the 'tween' decks. The Loire found the Dalgonar on the day after the storm (October 10th 1913) but the seas were too rough to launch any boats until October 13th, when the surviving crew was saved.
On February 4th the next year, the schooner Inca found the boat adrift on the ocean and the conditions were calm enough that the captain not only took many photos of the ship but completely examined her and saved a compass and binnacle, two chronometers, the captain's sextant and a few other items. Unfortunately, I can't find any photos of the Dalgonar by the Inca's captain, so I'm not sure if they survived.

I got all this information from the book 'Last of the Windjammers Vol. 1' by Basil Lubbock, from 1927. This is a very good and informative book and I found this blog trying to find photos of the Dalgonar.

Thanks for the additional information!

Thanks! I just found a story about this in The Sioux City Journal from December 11, 1913. --They had recovered this ship, but were not aware of what happened to the crew! I wanted to see what happened, so thanks for satisfying my curiosity.

I wonder how that story made it to the plains of Iowa!